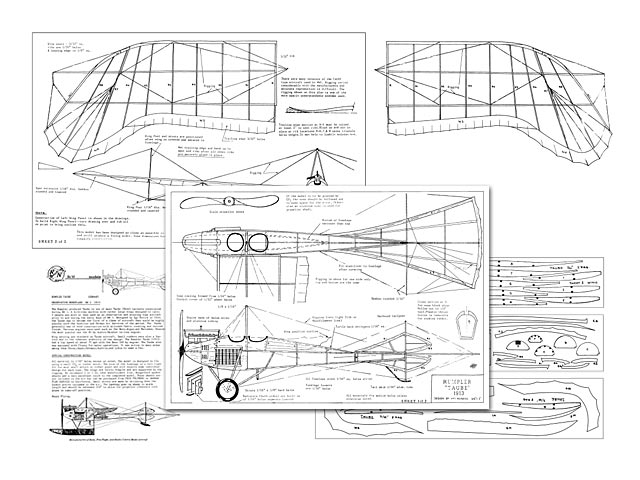 The Rumpler produced Taube is one of many Taube (Dove) varients constructed during WWI. A bird-like machine with rather large wings designed to carry 2 people was more or less used as an observation and scouting type aircraft prior to and during the early days of WWI. Designed by Igo Etrich in 1910; the Taube was to become the first of a class of aircraft that would be highly popular with the Austrian and German Air Services of the period. The Taube generally was of wood construction with stitched fabric covering and varnish finish. Various engines were used such as the Benz, Argus and Mercedes. However the most popular was the 80 hp Austro-Daimler in-line engine.

Wing warping was standard on Taube aircraft. Small rudders were also a fea-ture due to the inherent stability of the design. The Rumpler Taube (1913) had a top speed of about 75 mph with the Benz 100 hp engine. The Taube also was equipped with floats for water operations. It saw action in many areas among them China, Japan, Germany, Austria and Lybia to name a few.

SPECIAL CONSTRUCTION NOTES: All material is 1/16 in balsa except as noted. The model is designed to fly using a small CO2 or rubber motor. The size of the fuselage is a very tight fit for most small motors or rubber power and will require some individual design for each type. The wings are fairly fragile and are supported by the rigging. We recommend 2 or 3 lb test monofiliment line.

Hungerford spoked wheels add a very excellent touch to the completed model. These wheels are not included in the kit but can be purchased from PECK POLYMERS or HANNAN PLAN SERVICE in California. Small struts are made by stripping down the bamboo pieces included in the kit, The landing gear is shown in scale length and should be extended 3/4 in to allow for propellor clearance with plane in take-off position. Happy Flying."

Quote: "Hello. Attached is plan for the Rumpler Taube 1913, from R/N Models, design by Art Reiners. Wingspan is 63cm / 25 in for rubber/CO2. Also included are cleaned scans of parts. Best regards, Hans Jacob"