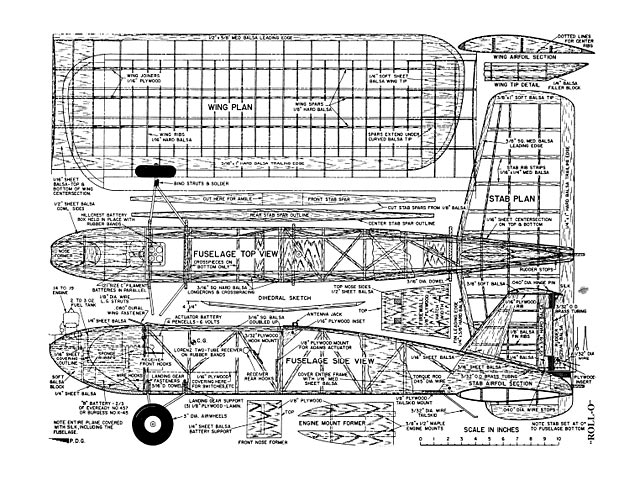 Quote: "Editor's Note: During each flying season, we have many fine designs recommended by many helpful individuals. But no radio controlled modelplcrne has produced so many comments as this particular craft. Only an average model as far as 'looks' are concerned, Roll-o was designed with a number of more important requirements in mind. Simplicity in construction, strength, and a forgiving performance in the air were some of these. That Mr Bonnerna succeeded in capturing all these elusive characteristics is a tribute to his designing skill. We express our thanks to the many who urged us to feature this model.

Roll-o is a radio-controlled plane that is truly fun to fly. It will perform practically any maneuver that you can expect from a rudder-only model. It is especially adept at performing horizontal rolls. In fact, on occasions it has succeeded in doing vertical rolls; hence the name. I could not think of a more appropriate one.

The design was in the development stage for almost two years. Undergoing numerous changes in that time, it first appeared with a lifting stabilizer and a somewhat smaller vertical fin. It was quite fast, had a rapid rate of climb, and gave appearances of being 'red hot.' However, it would not perform the maneuvers that you would expect from a seemingly 'hot' airplane. After two or three turns in a spiral dive, the ship would straighten out in response to control, but all that would follow would be a vertical climb back up to where the dive had started.

One thing that I did learn from a season of flying this ship was that it was about the most rugged model that I had ever seen. It came through at least a dozen power-on spiral dives into the ground without serious damage.

During its first winter the plane was completely overhauled and several changes were made - the CG was shifted forward, a symmetrical section stabilizer replaced the old one, and a larger vertical fin and balanced rudder were added. The results were very gratifying. Besides the rolling ability, it will do consecutive loops with ease, and will also do Immelmans, wing-overs, and hammerhead stalls. Wind penetration is excellent. It is possible to fly in 20 to 25 mph winds, and stay upwind for the entire flight.

While trying to simulate a slow-roll, by blipping opposite rudder as the ship was going through a snap-roll, I was quite surprised to find that the plane actually did an eight-point or 'hesitation' roll. This is a very spectacular maneuver. If you have enough nerve to hold it in a screaming spiral dive for about three turns, and then as it levels out and starts to come up, you apply opposite rudder, this baby will reward you with three consecutive horizontal rolls! ROG take-offs are very easy, too.

A word here about the control system used in the ship and at the transmitter. The Adams actuator on six volts gives adequate power at the rudder for fast response. I would not advise using less than six volts on this ship. I find that four pencells in series last for at least fifteen 8 to 10-minute flights.

I use a Mac II transmitter and a multivibrator pulser circuit employing a 3A5, a 1S4, and a sigma 5F relay. To my way of thinking, proportional control has many advantages over escapement control. However, it had one disadvantage in that the response to control was a little slow. To eliminate this, I installed two push button switches on my control box. One is a normally-closed switch and the other is normally-open. Pushing one will give full left rudder, and the other will give full right.

I find that I use the buttons for practically all of the stunt flying, while the proportional control gives a nice gentle re-sponse that makes for a good Precision Pattern under the AMA rules. If you use a mechanical pulse width control, the full rud-der position switches are easily adapted to that type of control. Insert the normally closed switch in series with the keying contacts, and the normally open switch in parallel with the same contacts.

The construction of Roll-o is quite simple and straightforward, but there is one thing I would like to stress..." 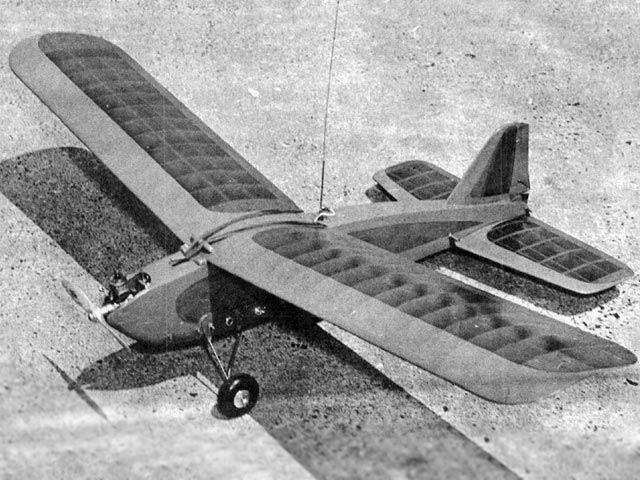 Bit more information for you: Roll-O was shown as a simplified plan - 3 views, leading dimensions and material sizes - in the 1955 Aeromodeller Annual (page 37) and credited to Vincent J. Bonnema, USA. Aeromodeller gave no indication of source but at the beginning of the Annual are acknowledgements to US magazines Air Trails Hobbies, Flying Models and Model Airplane News. I recognise the draughting style of your drawing as the work of the late Paul Del Gatto - his winged PDG logo is in the lower left corner. Hope this helps.
Ken Jones - 01/06/2019
Add a comment