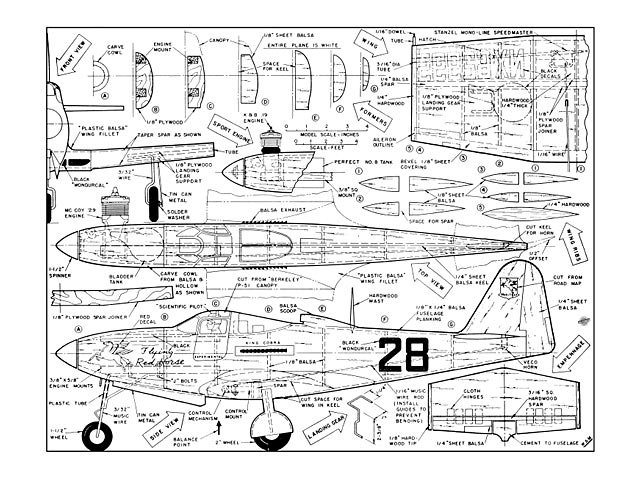 Quote: "The never ending quest for exact scale control line models which can attain high speeds or complete a competition stunt pattern led to the development of this unusual speedster.

Major Charles Tucker and General Petroleum Corporation (an affiliate of Socony-Vacuum), realizing the possibilities of this ultra streamline airplane, radically modified a standard World War II Bell P-63 Kingcobra fighter which later qualified for the Thompson Trophy Race at 392 miles per hour. The top speed of the plane was estimated at close to 600 mph; she was hailed as an engineering marvel. These speeds were mainly possible by removing eight feet from each wing thereby reducing the 38 foot fighter span to a mere 22 feet! The horizontal tail surfaces were reduced in similar fashion. These modifications, coupled with the gleaming white finish with black and red trim, makes the 'Flying Red Horse' one of the neatest racers to ever round a pylon. Unusual bad luck prevented the plane from winning the Thompson Trophy Race, yet the possibilities as a speed scale model are most inviting.

It will be noticed that the plans include additional information which will enable the reader to complete the World War Two P-63 Kingcobra, designed by the Bell Aircraft Corp., as part of our 3/4 in to the foot scale World War Two series. The Bell P-63 was a development of the Bell P-39 Airacobra, and attained speeds up to 437 miles per hour. During the years between 1941 and 1945 over 4,000 Bell Kingcobra aircraft were constructed, many of which were used by Russia.

The P-63A was powered with an Allison 12 cylinder V type engine of 1325 hp. This was located within the fuselage directly behind the pilot with the propeller shaft running under the pilot's seat and between his legs. This unorthodox location provided space for a 37mm canon in the nose, firing through the hollow propeller shaft..."

Update 27/05/2019: Added article, thanks to Pit. Note page 3 of the article includes a further drawing that shows alternate details to build the model as a military P-63A, with changes to wing layout and tail surfaces.

Update 29/05/2019: Added supplement file of plan sheet 2, now scaled up to fullsize, shows mods to build a military P-63A model. Note this is not high res, and the scaling wants checking carefully. Wingspan will come out at about 28-1/2 in. Many thanks to RFJ for the raw scan. 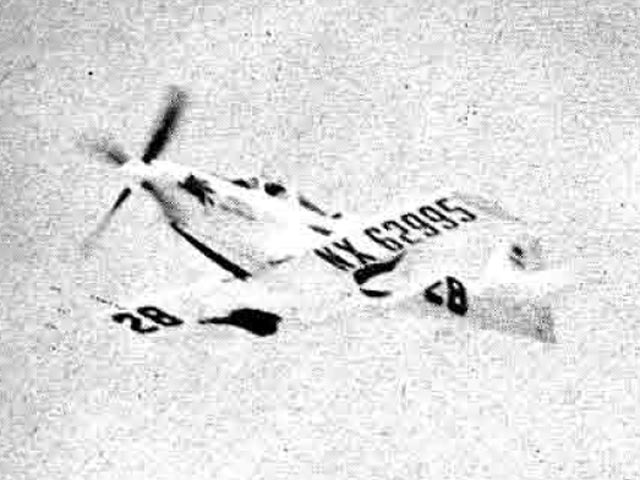