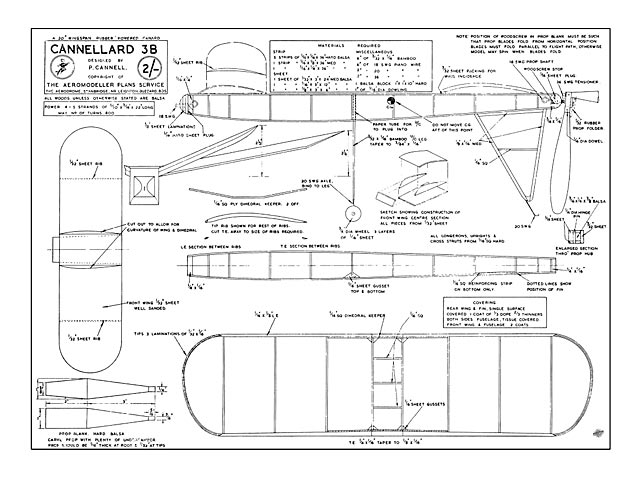 Quote: "THE spice of the unorthodox is again provided by this attractive little rubber-driven canard which is capable of a consistent 1-1/2 to 2 minutes in still air. Despite its small size this model is a good and regular performer and is not too difficult to fly well in the hands of any but a complete novice. It possesses all the inherent stability long associated with the tail first design and with a normal amount of care should give many hours of pleasant flying. A particular advantage is of course the greatly decreased mortality as far as airscrews are concerned. For anyone who likes the idea of something a little different that does not entail too much labour and materials the Cannellard will prove a welcome change.

The fuselage is a simple box structure and requires no explanation. The wing is likewise very simple but remember that all the ribs cut are tip ribs and a little wood must be removed from the rear end of each other rib to allow for the tapered TE. An all balsa front wing was chosen because this part of the structure comes in for some nasty knocks even on a lightweight. The wood should be well sanded, particularly towards the tips and a careful sanding after each coat of dope is also recommended.

The prop must be carved almost micro-film fashion as any extra weight on a prop in this position is just so much dead weight. Plenty of undercamber is carved in and the blades should be 1/16 in thick at the roots and 1/32 at the tips (the tips being rounded off after carving). One big advantage of the pusher prop is that it lasts as long as the rest of the model and bent prop shafts are non-existent.

The nose block and prop block are carved from 1/8 in sheet laminations. The rubber prop tensioner must be made just strong enough to fold the prop and no more. The position of the wood screw stop must be such that the blades fold from the horizontal position. The lower photo shows the ample sidethrust used and how the blades fold off centre so that they are parallel tc the flight path. Otherwise a spin may result as soon as the blades have folded.

The rear wing and fin are single surface covered and are given one coat of 1/3rd dope, 2/3rds thinners on both sides. The fuselage, front wing and prop are given two coats.

Trimming for flight is carried out as on an orthodox model but remember to keep the wings as far apart as possible, ie if the model dives move the front wing as far forward as possible before moving the rear wing forward and vice versa. Try to avoid altering the relative angular settings of the front and rear wings unless it ie absolutely necessary.

Hand launch flights are best made without the U/C and if the model is really light four strands of 3/16 x 1/30 rubber may be used to advantage. On the original the power was five strands of 3/16 x 1/30, 22 in long, which gives a comfortable 800 turns maximum although with careful winding in of rubber 900 turns may be tried - but don't blame me if a new fuselage is soon required!

ROG is done comfortably on the one leg as long as there is a smooth run of three to four feet. The model will get off in two feet if there is about a foot drop at the end. On 800 turns the original whittles off the deck doing the first half of a loop up to fifteen feet, rolls out of this position in three to four feet and then finishes off the power run by a steady climb for about a minute. " 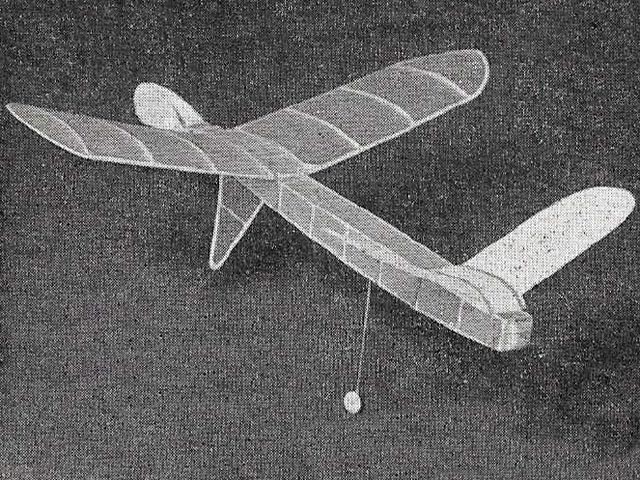