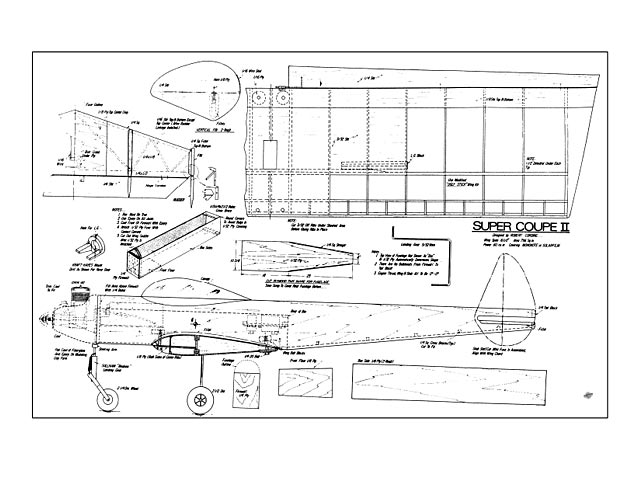 Quote: "Fun-Fly your bag, something different as well, then why not try our uniquely constructed, thin plywood multi-bird? Lots of wing area, .60 power and lightweight all combine to make this an outstanding plane. Supercoupe II, by Bob Cording.

Would you like a plane for fun-fly contests that will give you an edge? How 'bout one rugged enough to stand almost every weekend flying for more than a year, with no apparent wear? Craving a plane that looks different but flies well? Need a plane that is relatively inexpensive and easy to construct? Always wanted to fly to Acapulco with a blonde model? Build a Supercoupe II! (four out of five ain't bad!)

With almost 800 square inches, .60 power and less than six pounds of flying weight, this plane will make it tough on your opponents in fun-fly events. After the construction portion of the article you'll find some legal (I think) tricks which can make you even more competitive in contests.

This craft was empirically designed. 'Empirical' means I didn't know any theory so it was all trial-and-error. A plane for fun-fly events should have good climb performance (keep it light), good low speed characteristics (light with a big wing), high speed ability (strong engine plus low drag), consistent spin performance including flat spins (big rudders with lots of throw), and quick ground handling (trike gear with wide mains).

To achieve all the above, Supercoup II uses a modified Ugly Stick (oz5175) wing joined with a light-weight rolled 1/32 plywood fuselage. Large twin rudders with 400 throw in each direction make it spin.

CONSTRUCTION: Wing: The easiest way is to buy an Ugly Stik wing kit (Jensen), then modify it for low wing service. The modifications are simple: Sheet the center section with medium soft 3/32 balsa top and bottom as shown in the plans to provide extra strength for those fun-fly touch-and-go landings. Cut 3/32 off the ribs under the sheeted area before gluing the ribs in place. A couple of Top Flite landing gear blocks (two for 50c, what a bargain!) are glued and braced behind the lower main spar doubler. If you will glue these blocks up in the wing about 1/8, ie not flush with the bottom sheeting, the covering will he smoother. The main gear has about a two-foot track which makes it almost impossible to ever drag a wing-tip.

I made new ailerons out of 1/4 in thick balsa, but if you like scallops you can use the ones in the kit. Don't change the kit wingtips, though. I think they are the secret to the anti-stall characteristics. The wing is held on with four 1/4 in nylon bolts. This is much more reliable for long term flying as it completely avoids the problem of looseness and vibration at the front connec-tion. The bolts go through the wing structure and screw into hardwood blocks tapped 1/4-20 which are glued inside the fuselage. The wing trailing edge needs only a couple of 1/16 plywood pads to take the bolt load but the leading edge requires insertion of two 1/8 plywood plates for strength. It is important to angle the rear tapped blocks so that the bolt heads hit the wood pads squarely. (A little touch-up with a Dremel tool will take care of minor misalignment.)

A neat trick for installing pin-type hinges in balsa is: Drill two 1/8 holes in each hinge half for better adhesion. Cut slits in wood with knife and smear hinge and slits with Titebond glue. Assemble, wipe off excess glue, and let dry 24 hours. Any glue that got into the hinge pin area will pop off when the hinge is flexed, leaving the surface free of drag. (Remember how bad it was the last time you got epoxy in the hinge?)

Fuselage: The fuselage has two major parts: (1) the 'box' which holds engine, tank, radio, and wing; (2) the 1/32 plywood which covers the box and goes back to the tail. The box must be constructed square and true. All the rest of the alignment depends on this..." 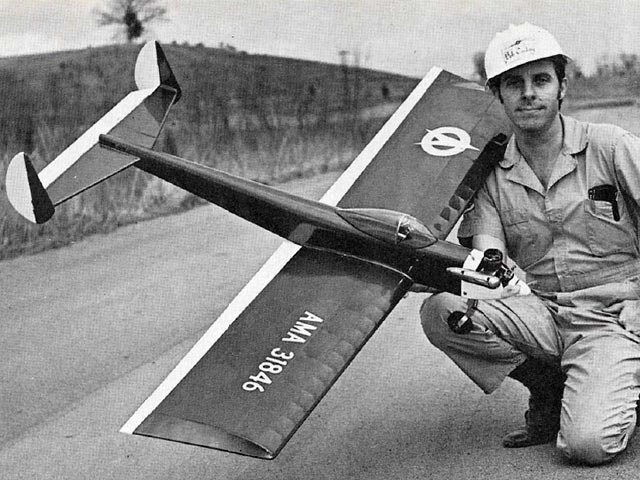 Great aircraft, very good performer, a pleasure to fly, lands like a Telemaster.
Mike Saucier - 30/03/2021
Good day, I built several of these in the early to mid 80's. for a long while I would have at least 2 at the field at once. I am planning to build another one in the near future and have already gathered all the parts. The first one I built is Black and Orange, then I bought the Black and Yellow the tail dragger version. The rest have tail numbers. Number 5's markings are inverted. Picture 005 and 006 were at a private strip in Aylesford Nova Scotia Canada that a fellow who flew his full scale Cessna from. Pic 007 is on the button of the decommissioned runway at Canadian Forces Base Summerside. Pic 008 is number 4 in flight with a Canadair CP-107 Argus and Grumman CP-121 ASW aircraft static display in the background, again at Summerside. All were foam core wings and powered by either a OS 50 FSR or a Webra Speed 61. I would have to say the most enjoyable aircraft I have flown in my short 40+ years of flying model aircraft. From Medicine Hat, Alberta, Canada
Mike Saucier - 31/03/2021
Add a comment