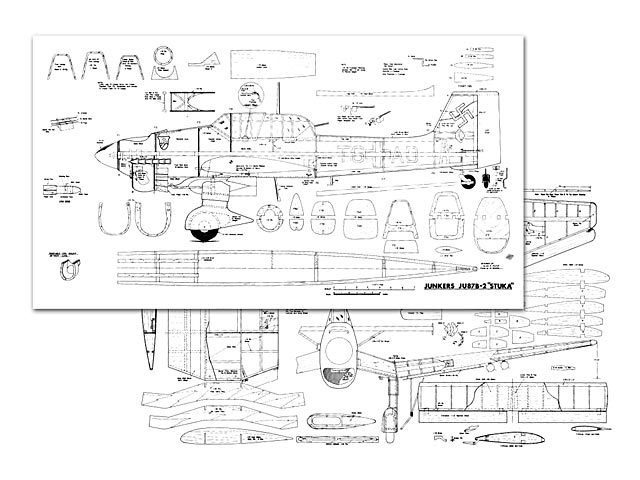 Quote: "Having seen an actual Stuka in a museum in Chicago, my interest was kindled, and the in-flight shots of the Stukas in the movie 'Battle of Britain' provided sufficient motivation to begin the project. Many people have said the Stuka was an ugly airplane, but it makes an ideal scale subject. Something of this was discussed at the talk on scale at the '70 Toledo Conference.

I decided on the B model of the JU-87 because the engine cowling on the B lends itself to concealing the inverted Enya .60 better than the later models would have. Much research was done before the plans were drawn and I found every three-view and kit differed in details. At just the right time, a 1/32 scale Revell kit came out, and along with Profile Publication No.76 I had just what I needed to get started.

Fuselage Construction: Build the crutch from 3/8" x 1/2" balsa directly on the full size plans. Titebond glue is recommended for all construction ex-cept in and around the engine compart-ment and parts exposed to fuel and oil, where epoxy is better. Determine exact width of the engine you plan to use, then build engine bearers into the crutch. The original does not use any right thrust, however your experience may dictate the amount you like to use. Some right thrust will help on take offs since you won't have to hold as much right rudder.

While the crutch is still pinned to the plans add top half of fuselage formers F3A through F8A, also add top keel and cockpit deck. When dry, remove from plans and add 3/8 x 1/2 vertical tail post and check alignment. The vertical fin is built in-place by adding four ribs and leading edge. Installation of gussets, blocks, sheeting, etc, can be determined by studying the plans and photos. Now slide firewall F2 into position and epoxy in place. Draw front of crutch together, epoxy F1 in place and clamp until dry. This is a good place to use the new 5-minute products such as Devcon or Hobbypoxy Quick-Fix. Lower formers F3B, F6B, F7B, F8B, wing saddle and lower keel are now glued in place. Install control rods for elevator and rudder/ tail wheel before sheeting and planking with 1/8 balsa. Sand aft fuse-lage well to keep tail area as light as possible.

The canopy is built up from 1/8 plywood arches and 1/8 ply strips, then covered with celluloid which is in turn covered with a 1/32 ply frame. On the original the 1/32 ply frame was made up of several small pieces so a full size pattern is not available for a one piece frame and is not considered practical. The forward canopy arches are springy enough so that they can be spread apart slightly to install on the tracks glued to the fuselage cockpit deck.

The fuselage should be completed before making the removable cowling, since it must be tailored to fit your model. Start by epoxying formers A, B and C to the two 3/8 x 1/2 x 4-3/4 in balsa strips. Fill in between formers B and C with 1/2 x 3/8 balsa and scrap..."

Quote: "Steve & Mary, Here's the plan and article of Alan Pickup's 67 in Junkers Ju-87B Stuka, published in September 1970, Model Airplane News. When that issue came out, I really liked Alan's plan and took a slide of it for possible enlargement, but unfortunately didn't shell out for the full-size plan. Thus the attached plan is just a cleanup of the magazine page. That page was obscured with a grid of close dots printed over it and much of the text is unreadable, but I think there's enough info for a reasonably experienced modeler to build the model. It sure would be nice if someone with the full-size plan would get it scanned :) Dave." 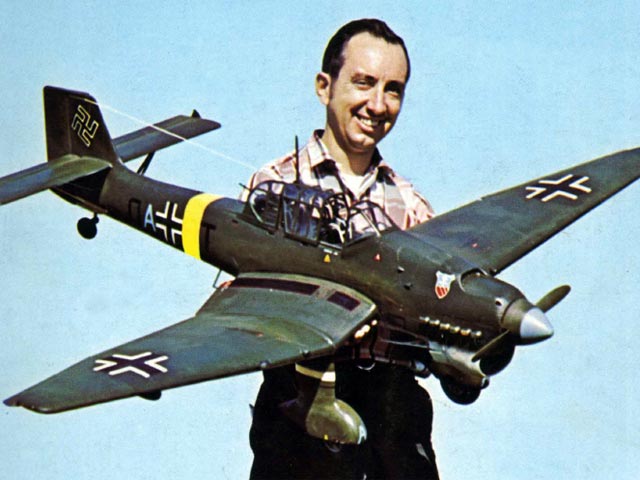