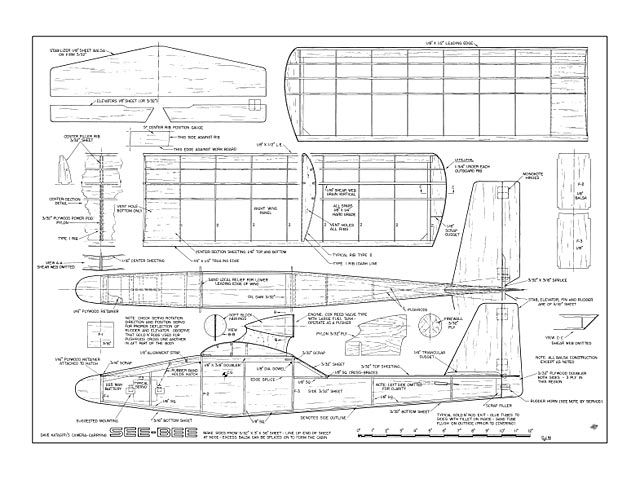 Quote: "A Kodak Instamatic 18 gets an aerial view of the world in this little pusher machine. See Bee, by Dave Katagiri.

The Boeing Hawks R/C Club sponsors an annual Model Air Fair at the Seattle Pacific Science Center. In order to add some dynamics to an otherwise traditional static display the club decided to attempt R/C fixed wing flying demonstrations. The problem with the idea was that the center grounds consisted of a circle of buildings and spires such that flying would have to be done in a 90 by 150 foot area. A small, slow model might be held within such an area, but wait - the 'landing' area consisted of a reflection pond flanked by trees and obstructed by large sculptured fountains.

Safety concerns eliminated existing designs, so a special design was in order. The model would have to be light and slow enough such that if an accident did occur there would be little chance of injury. Therefore the design criteria for the model were:

The resulting design is presented here. It features a fat high camber airfoil, a semi frangible wing and a pod mounted and muf-fled Cox reed valve engine. It weighed in at 15 ounces.

The ship was named 'Air Fair Special' which was appropriate for its initial duty. Seven successful flights were made by Oly Recio and the author during the two day show, including a nice plug from KING-TV. Incidentally, the TV news people advised prior to the show that they look for action news, therefore we were given additional motivation for flying in such a ridiculous place.

Subsequent to the show more flights were made in a local grass covered play-ground for photographs. With an oversize 6-3 three bladed prop mounted backwards and a muffler the neighbors won't know you're flying 'one of those noisy model airplanes.' In this configuration the model is an excellent primary trainer. Properly trimmed as a Free-Flight, it will do just that.

The next phase for the model was to receive a Kodak Instamatic 18 camera just so it could be renamed 'See Bee.' There are several 110 cameras available, but the Kodak camera seemed to have a faster shutter than the others. Also the shutter release button is lighter to push. Including the camera and a third servo, See Bee weighed in at 20 ounces. Performance with the prop installed for pushing is still adequate. It has the power margin to reach about 500 feet of altitude on the large Cox tank. Obviously, the photo quality is not good, but it is still reasonable considering the equipment used. The Kodak Instamatic 18 must be rewound after each frame so only one picture per flight can be taken. The best way to take pic-tures is during the glide after the engine stops. In this way the camera will not be disturbed by vibration.

Doublers are not used to tie the spars to-gether at the center; therefore, care should be exercised when the center-section 1/16 sheet cover is joined to insure a good bond. Overlapping film covering on the bottom of the joint provides reinforce-ment.

The body is designed to house mid-size radio equipment. The original was controlled (two channels) by a World six channel receiver, two D&H servos and a 225 ma battery. As designed the model did not require any ballast to achieve balance. The body side is shaped such that each side can be made from one 3 by 36 inch sheet (see note on drawing).

To ease the job of cutting, the sides are defined by straight lines to allow a metal straight edge guide to be used. The doublers and longerons can be bonded to the sides before the two sides are assembled. Co-axial nylon pushrods were used in the original so the exit holes at the rear could be made watertight. If a camera modification is your desire, plan ahead as to push-rod routing. On the original the camera simply rested on top of the pushrods that were routed along each side (see photo). There was minor interference between the servo and a pushrod on one side but it worked..." 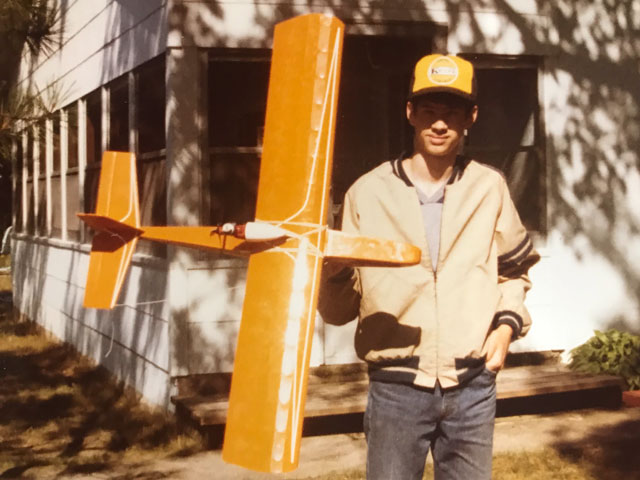 I was excited to see the plans for the See Bee added to your collection! I built one in 1981 from the plans in Flying Models [model photo & more pics 005]. I used a Kraft 2 channel radio and a Cox .049 motor. The plane flew very well. It was hand launched and landed on water.
JohnDagg_Michigan - 28/05/2019
Add a comment