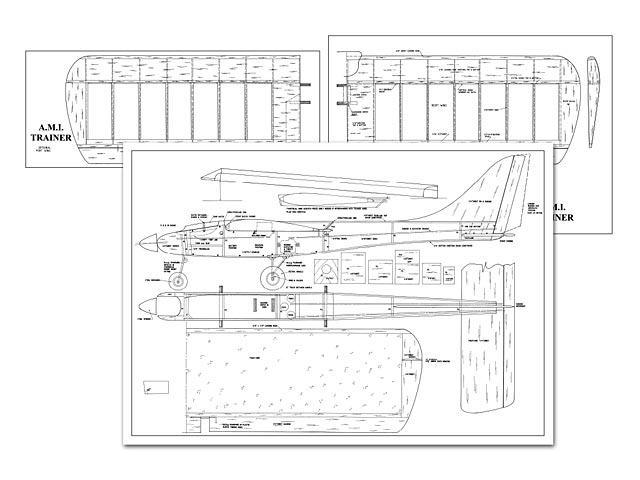 When I get bored, I tend to doodle on bits of paper and, depending on the modelling needs of the time, I produce var-ious designs of aeroplane. Not too many of these designs ever see completion in the flesh (wood?), but this one did due to the sad demise of Pussycat (oz11698), my eldest son's last trainer.

Pussycat was actually repairable, but hardly worth the effort, especially as the motor I had in it was not the most reliable, making landing training difficult. At Woodvale in 1995 I bought a K&B 28 as it looked as if it should throttle well with its small carburettor throat and it also has a well earned reputation for being quiet. It was cheap too! The model had to be a bit bigger than usual (for me) to take the .28, had to be very forgiving at low speeds to take tyro mishandling and needed to be strong, but quickly built and I also wanted it to look a bit different. The latter aspect was taken care of by using a shoulder wing design and a stream-lined look, although I later realised it looked very like the old Veron Concorde design that used to grace the ads on the 70's. Nothing new under the sun is there?

FOAM CORE WING: I decided in the end to use a foam wing as this made construction very quick and strong, the editor wanted a built-up alternative though, so I built one of those too, the construction of which is covered in the next section a couple of paragraphs down. To save having short lengths of veneer left lying around, I limited the span to 48 in without the tips (the normal length of veneer, who's a cheapskate?), but the very low aspect ratio I wanted for good stall characteristics also gave plenty of wing area too.

Just to make sure it would fly slowly, I also decided on a flat bottomed section. If I had wanted to be REALLY mean, I could have wrapped the veneer around the leading edge, but as balsa is easier to fix after a prang, I used a nice chunk of soft balsa instead. Construction consists of gluing the leading and trailing edges in place, sanding to 5 degrees from the vertical at one end and 90 degrees at the other. The tips are glued to the 90 degree ends along with the gusset and the wings are glued in the centre to form a 10 degree dihedral angle. I glued the centre join with epoxy and later reinforced it with 2 in wide PVA soaked nylon after the wing had been sanded to section. Once it's sanded to shape and you've cut and sanded the ailerons, there isn't any more you can do to it until the fuselage is ready so it's time to do something else.

After flying the model around off and on for a couple of years (more off than on due to the weather and other priorities I'm sorry to say), I decided to give it a bit of a performance boost and turn it from a basic trainer into an intermediate aerobatic model as James was getting very confident with the trainer. To this end, I gave it a new, symmetrical section wing, larger rudder and ultimately a .40 motor for a bit more oomph! This gives a variety of options actually, because the original .28 flies the new wing nicely too. (But the .40 is a bit too warm for a trainer of this size in my opinion.)

The ecrobatic wing is very similar to the above except that its completely flat, uses a symmetrical section and has a much finer leading edge to make it flick roll more easily. The accurate way to join it is to pin a strip of sheet to the tips that is just wide enough to go from the centre line (leading edge to trailing edge) to the thickest point of the wing at the bottom. When these strips touch the building board, the tips are level. Don't worry if they are a fraction different at the root, because the model will still fly well. If the wings are the same fraction out at the tips, the model will always try to turn one way or the other.

BUILT-UP WING If you want to use a built up wing then I've shown an alternative on the plan and it's built as follows: Make a copy of the wing rib shape (without spars) onto a piece of scrap 1/16 ply and carefully cut it out. This is now used to cut out 14 (fourteen) 1/16 ribs and 4 (four) 1/8 ribs. Pin them all together as a block (photo) and then sand them to shape. The idea here is to remove as little wood as possible whilst ensuring that all the ribs are the same. Mark the spar positions onto the block and use a razor saw to cut out the spar slots. They should be a snug fit, but not too tight.

Put the plan of the wing on a flat building board and cover it with thin polythene, old Solarfilm backing is ideal. Pin the lower leading edge sheeting in place and glue the lower spar to it..." 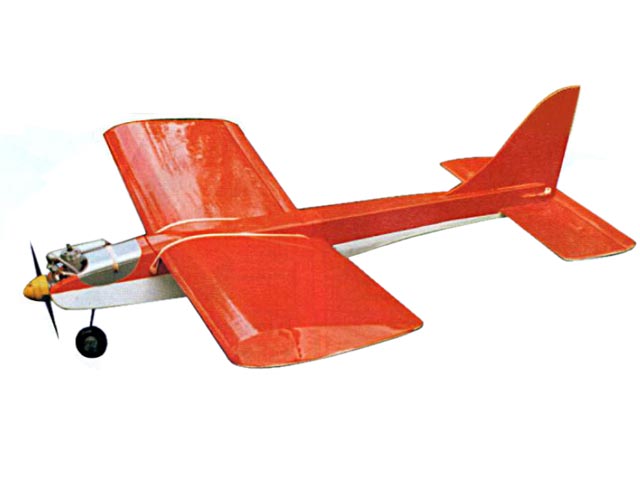 Would you believe that the model is still flying? (2020) I've used it for many years to try out different power units, mainly electric, it presently has a home-produced contra prop set up.
John Rutter - 04/03/2020
Add a comment