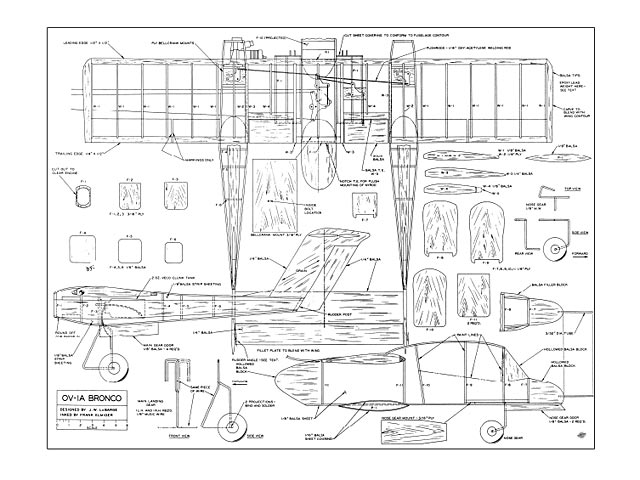 Quote: "Airborne equivalent of the Jeep makes fine Carrier or Scale model, with twin 19's or 29'2. Lands on deck easily without a hook. Bronco, by Jim Labarge.

The OV-10A Bronco was designed by North American Rockwell to replace the aging, unarmed Cessna Bird Dogs used by the Forward Air Controllers in Southeast Asia. Former President Johnson called this aircraft 'the airborne equivalent of the jeep.'

The powerful Bronco has certainly lived up to its nickname. In 1966 Air Progress ran a cover story on the OV-10A and included some drawings. 1 normally look for unusual airplanes; here was one. Not being sure what kind of model it would make, I built up an all-sheet 049 version. Surprisingly, it flew well. A number of these 049 Broncos were tried out with built-up wings, booms and the like. Satisfied I had a good model, I proposed the little bird as an article for AAM, however, it was suggested that I try a bigger built-up version for Carrier and/or Scale. After much head scratching and midnight oil burning, the prototype appeared at the flying field. While the design was being worked out, Frank Ehling, the technical director for AMA, gave permission to fly the Bronco in Carrier with or without the tailhook. Now we had a model to stop the show in Carrier. And stop the show it does.

Just because the OV-10A has two engines, don't panic and run away. Though there haven't been any twin engines in Carrier since the early '60s, that doesn't mean twins won't work: Properly set up a twin can be a real asset. How many times have you seen a single-engine Carrier model shut down and crash like a rock? That second engine will prevent an embarrassing dunking. If you read the fine print in Section 20.10 in the AMA rule book under Navy Carrier, you will find an extra five points just waiting to be given to the owner of a Bronco. Some Carrier models nose over and lose points or damage airframes. Being a tricycle-geared airplane, the OV has never nosed over, and I save on props. The extra engine is not a problem if you know your engines. I have normally been airborne in 30 seconds.

The aircraft depicted in this model is the Navy-Marine version. It can fly Class I or II just by changing the 19s for 29s (scale is 1 in = 1 ft). Although the canopy is sheeted, the model is close enough to scale to win the the Scale event. The OV won third at the 1971 Air-Zona Invitational.

Before you start building, decide whether you want to fly Carrier or Scale. If you have no intentions of flying Scale with the Bronco, there are a number of things that can improve performance. First get the hottest engines available and install slide valve exhaust and fuel throttling pressure. Replace the clunk type tank with home-made brass tanks and replace the scale wheels with thin speed wheels. Extra details such as machine guns, wings walks, pitot tubes, rivet details and the scale finish can be sacrificed to cut weight. You may want to cut out the centers of the formers but I feel you will cut the life of the model. I am sure there are more ideas, but these are a start.

If you want full scale points for Carrier landings, do the following while the model is being built: install a set of Rocket City wheel brakes to the main gear wheels, and actuate the brakes by running a nylon line up to the throttle transfer crank. Since the brakes must stay clean to work, mount the tank overflow tube away from the brakes. A set of Tatone-type manifolds will keep gunk off the wheels.

If you only want to fly Scale with the OV-1OA, here are some modifications. Add spinners to the engines, route engine exhaust to scale exhaust ports, make up shock- absorbing landing gears, and make the flaps retractable. By mounting the Nyrod in one of the booms and replacing the sheeted canopy with a .030 in plexiglass canopy, the scale effect increases. Add a detailed interior and dropable stores, and the Bronco will take on any scale airplane. More information on the OV-10A Bronco can be obtained from North American Rockwell in Columbus, Ohio, and Garrett AiResearch in Phoenix, Arizona. I have found both companies most helpful.

Construction: The model should be built in five sections and then assembled into one. Since weight can hurt performance (especially in Class I), keep everything as light as possible. The model is big compared to most carriers. Follow the plans carefully. Some new ideas are incorporated in the design.

Cut out all eight pieces of the tail section from 1/4 x 6 inch Sig contest balsa. Glue dorsal fin to main fin and fin to stabilizer. Leave rudders off until final assembly. Hinge the elevator with poly-propylene hinges - three will do. Mount a fairly long control horn on the elevator to minimize movement. Check alignment carefully, and set aside to dry. Next cut out the formers for the booms..."