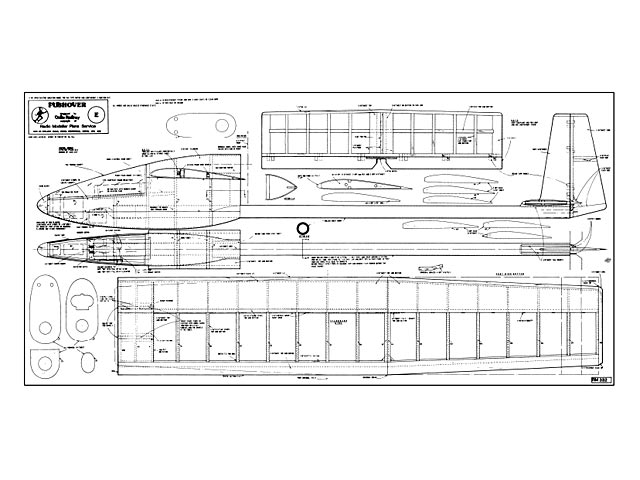 My interest in electric powered flight was kindled a few years back when Dave Day (renaissance man of aeromodelling) gave me copies of articles which had been published in Aeromodeller about electric powered models. This gave me inspiration to design a small aerobatic model which was made from a card foam sandwich material. It flew quite well (in fact I made two) but both had a limited flight duration of around five minutes.

You may think after this experience, why go on any further when there are many small light IC engines available at much lighter power-to-weight ratio? Well, I can list advantages of electric powered flight, such as: cleanliness, being able to fly immediately upon arrival at the field, and the ability to switch power on and off as required. However, there are disadvantages, the main one being the heavy in-flight battery pack payload. Nevertheless, 'Pushover' weighs out at only 10 ounces per sq ft.

As you will see from the plan, I favour conventional construction, although the prototype did have a vacuum formed underside to the pod made from ABS plastic. The alternative laminate of balsa wood, although a little difficult to construct, is much more rigid and lighter.

I should stress that this model is designed to fly well and will not suffer violent manoeuvres or very hard landings, but please do not beef up the structure. It is adequate if treated with care. I fly from a flat site and, with no lift around, achieve flights of about nine minutes, but as soon as there is any sign of lift, it is hard to fly for less than 15 minutes and often on landing I find there is still quite a bit of power left in the battery.

Construction: The first job is to make the fuselage boom. Wet two sheets of 100mm x .75 mm thick balsa and then mop off surplus water before wrapping the first sheet around a 22 mm dia rod (I use an aluminium tube). Now this is where cyano glue is a must; run the glue down the overlapped edge, it will stick instantly due to the damp wood. (Watch your fingers!). Rotate the roll of wood to make sure it has not adhered to the rod former. The second sheet can now be butt-jointed to the overlapped edge, once again using cyano. Now spread PVA wood glue over the remaining surface and wrap the second sheet around, holding in position with numerous strips of masking tape. Remove the boom before completely dry to avoid it shrinking on to the former.

Next, cut out all formers. I use a sanding disc to ensure the edges of these thick formers are at the correct angle. Mark the position of F3, F4, and F5 on the boom, slide formers into position, align and glue with balsa cement. To help alignment of formers it is a good idea to draw vertical and horizontal lines on each former. Now add the 1.5mm balsa extension tube in front of F3 and fix F2 in position.

You are now ready to add the sides, dummy former F6 and former F1. Note, it may not be obvious from the plan that dummy former F6 is taken from the plan view of the fuselage and extends from F1 to F3. Now plank the underside of the pod, first in a longitudinal direction and then a second layer of .75mm balsa in a diagonal direction. Once again, the use of cyano is a great help in this process. It is necessary to make the wings, tail and fin before being able to complete the rest of the fuselage..." 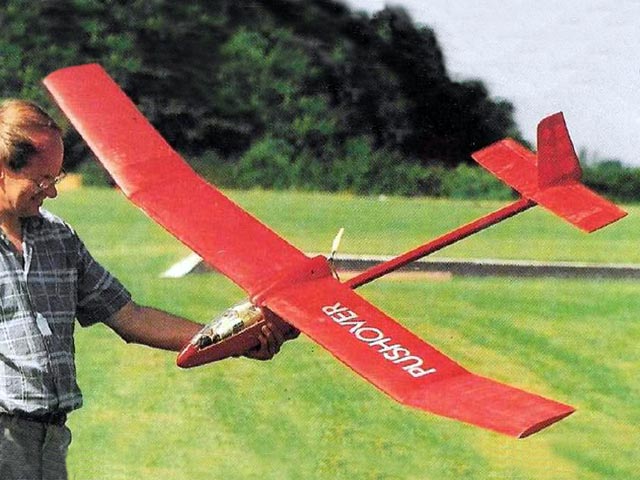