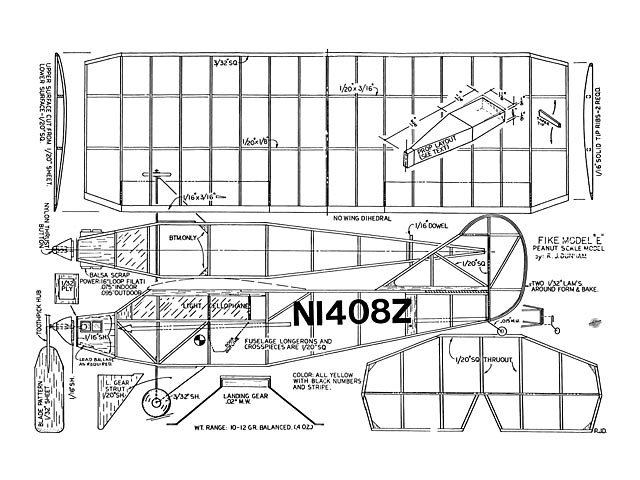 Quote: "With a duration of 60 to 75 seconds indoors, this model has about 10 more square inches of wing area than the popular Lacey. Fike, by Bob Dunham.

FOR THOSE WHO scream 'ban the Lacey' or want to build and fly WW-2 fighter planes for peanut scale ships, you might as well go on to the next article, cause you ain't gonna like the Fike Model E. For those who want to beat the Lacey, please stay tuned to this article, because the Fike is the most likely candidate capable of the task.

This super-low aspect ratio homebuilt monowing lightplane is the brainchild of Wm J Fike who resides in Anchorage, Alaska. Mr Fike is a retired airline pilot whose theory is that thin sectioned, lightly loaded, low aspect ratio wings are desirable features for climbing above mountain ranges, prevalent in Alaska. In actual practice this proved to be true, and other benefits accrued, such as increased cruising speed and range due to less drag of the unbraced wing, along with improved landing characteristics.

As far as the Fike peanut is concerned, the span limit of 13 in makes the low aspect ratio one of its most desirable features. Iit actually out-Lacey's the Lacey by a considerable margin, and has a total wing area of 55 sq in, which is about 10 squares greater than the Lacey. Also, the surface outlines are simple, tail areas generous and a streamlined nose with a few cylinders showing giving it somewhat of a Piper Cub like appearance in profile.

Since my main interest is in competition peanuts, the present judging rules make it advisable for the ship to be moderately detailed, but still capable of good duration. In any regard, it is absolutely necessary to keep the flying weight low, and to this end, wood selection is mandatory. Although I fly the ship both indoor and out in moderate 10-12 mph winds, I use mostly 5-6 lb density indoor quality wood for the structure. My Fike had a flying weight of 9 grams, completely balanced, but not including the rubber motor. By careful searching, this quality of wood can be found in the racks of your local model shop, but if you prefer can be ordered from Micro-X, PO Box 1063, Lorain, OH 44-055. You can order both sheet and strip and specify weight, grain and dimension, and for a quarter can request their catalog containing other hardware items.

Fuselage: The fuselage longerons are laid dawn over the plans and kept in position with pins on either i de of the wood, but never through the strip. I sometimes use small lead chunks instead of pins and find these very satisfactory, Although the plans call for 1/20 sq longerons and cross pieces, slightly larger 1/16 squares could be substituted, especially if you intend to fly it outdoors.

Build both sides atop each other, then carefully separate when thoroughly dry. The two sides are then made into a box by adding the cross pieces at each upright. At this point it is critical that the box is square or you will end up with a trapezoidal fuselage which will not allow the surfaces or anything else to properly align. At points where the fuselage makes abrupt changes in the to view, carefully crack the longerons after scoring with a sharp razor, then coat with a small dab of glue to strengthen the break. Additional cross braces may be added in the lower window area to prevent the heavy-handed from squashing the fuselage in the excitement of the launch..." 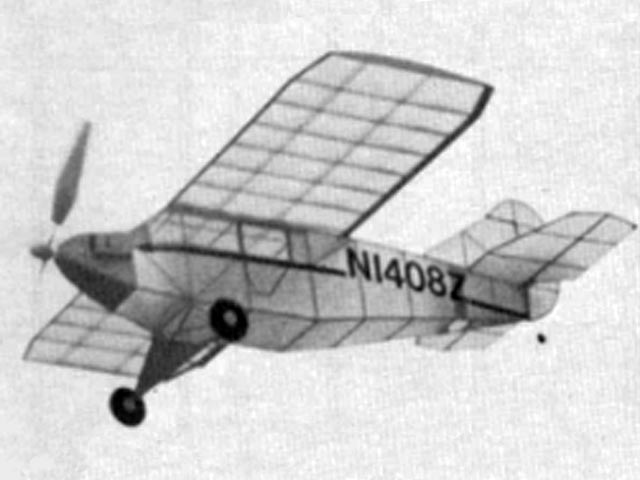 Good afternoon, I've attached a photo of my Fike flying [pic 004]. It is unusual in that it is based on the 13 inch Indoor Peanut version but I enlarged it 300% to fly outdoors. It's 39 inch wing span with a 12 inch chord. It takes off from the ground and flies just like the Indoor version! Regards,
Malcolm Campbell - 05/07/2021
Add a comment