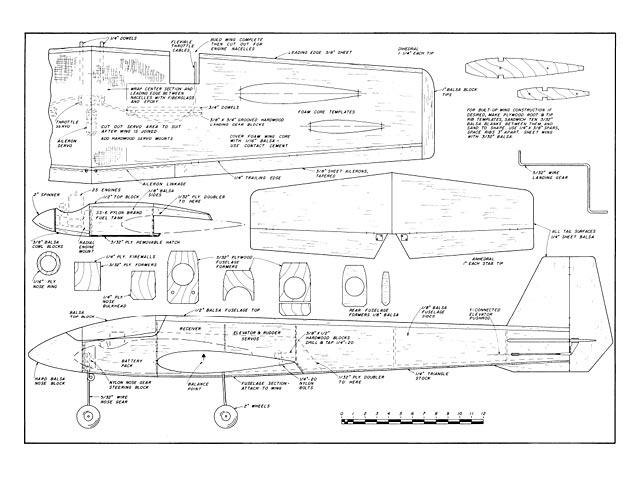 The sound of a twin-engined aircraft flying is enough to justify the effort required to build it. A really high performance twin screaming through the air is, to me, a real RC flying thrill. Multi-engined scale models are becoming more common, but twin pattern or sport aircraft are not seen too often. Several years ago I designed and built a 72 inch pattern twin called Big Apple (oz8368) powered by two piped Schnuerle .40s, and its performance was exciting to say the least. My friend, Mike Horn was impressed by that twin, but didn't want such a large model with its two fuel-gulping engines. We kicked this around a bit, and decided that a moderately sized model powered by two .19s would be an interesting project - the Fifty Caliber is the result.

The name came from the use of two .25s - OS Schnuerle 25s. The .25s were selected after the model was begun. The OS engines had impressed us with their power, quality, and reliable idle - they seemed an ideal choice for a twin. We wanted plenty of power, but even more we wanted good, reliable engines - in any twin, single engine flying is not too relaxing.

Aerodynamically, we have not broken any new ground. This is a conventional design - we wanted an easy flying, capable aircraft without trying to invent something different. The airframe is basically sized around a typical .40-powered pattern model. The wingspan is 58 in, wing area is 550 sq in, and overall length is 55 in. The wing planform is tapered of course, and the full symmetrical airfoil is a little more than 16% thick, for reasonable speed and enough lift for comfortable landings. The fin and rudder were made quite large to help flying when one engine decided to retire early.

For the same reason, the engine nacelles were placed as close as possible to the fuselage. For strength, less vibration, and for balance, the engine nacelles have as little overhang from the wing as possible. Anhedral is used in the stabilizer - honestly, this was done for looks, not for aerodynamic reasons. The overall design is similar to my earlier twin .40 model, so we were confident that its flight characteristics would be good. Looking at it now, we wonder about a .40- or .45-powered single engine version that should work out well also.

Construction methods were selected for the easiest possible work involved. The original model has a built-up wing, but both foam core and built-up construction are shown on the plans. The engine nacelles are basic box construction, with the only real shaping to be done on the cowling blocks around the engines. The completed wing is notched for the engine nacelles, which are epoxied in place. The tail surfaces are simply sheet balsa. The fuselage is also a basic box construction, but with the sides curved in toward the top for more streamlining. Shaping is necessary on the nose block and top block, but it is pretty easy to end up with a well streamlined fuselage.

If this sounds like a sales pitch, I guess it is - we feel an average builder and sport flier can handle a project like this, and end up with a conveniently sized, exciting model. Mike Horn built the prototype, and although the elapsed time was about one year, the actual working time was much less, little more than would be required for a single-engined model. Two engines certainly don't mean twice the work. And this model fits easily into Mike's Toyota. For economy, even two OS 25s don't burn too much fuel.

We can make several comments on twin flying; the most important and the most obvious is to start with two tested, broken-in, well adjusted, reliable engines (do as we say, not as we do.) The prototype airplane was test flown with two OS 25s which had a total of, at most, five minutes running time. Idle adjustment is particularly important as the idle mixture affects how the engine accelerates up to speed when the throttle is advanced. Uneven engine acceleration on the takeoff run is not conducive to an impressive, straight takeoff.

Single engine performance is what everyone asks about. We can report that there is nothing to be concerned with. One engine cut out halfway into the first flight, and we were able to maintain altitude on the single engine, turn into an approach pattern, and make an uneventful landing. There was no tendency to fall off on the landing approach. It was a bit of an effort to get to that first flight. The first attempt had to be scrubbed due to a pinched fuel line and a loose engine mount. A week later, the first takeoff run was aborted due to the rudder servo having been hooked up backward. With this detail taken care of, we took off, tried consecutive rolls, loops, cuban eights, etc., until one engine quit. Only minor trim correction was needed - it flew 'right off the drawing board.' The second flight was, as usual, more relaxing, with several low passes (for the photographer to get some flight shots), and then some fun flying. Overall flight performance was very good, with plenty of power for any maneuver - particularly large, graceful looping maneuvers - but no harder to fly than any single engine pattern ship. The landings were easy, there's enough wing area for it to float in. And it's fast - plenty of level flight speed.

We'll go on to the construction notes. As you can see by looking over the plans, this is not a complicated model and it can be built easily and quickly. First a choice must be made for the wing: either built-up or foam cored. Each has its proponents, so the choice is up to the builder. Foam cored wing construction has been described many times before, so we will only point out several things done differently for the two engine configuration. The throttle ca-bles can be set into the foam cores before they are skinned, and after the balsa skins are contact cemented in place, sections are cut from the wing for the engine nacelles. For landing gear block reinforcement, we like to epoxy a piece of dowel to each end of the gear block. The dowels go through the wing core, flush with the upper surface, and are installed with the gear blocks before the wing is skinned. Fiberglass and epoxy around the center joint, and on the leading edge between the engine nacelles, adds plenty of strength where it is needed the most. Aileron linkage is conventional and the wing is retained with the usual dowels and 1/4 in nylon bolts.

The engine nacelles are built-up box construction with 1/32 plywood doublers. The radial engine mounts should be bolted to the firewalls and the engines installed on them, so the cowling blocks can be ad-ded and shaped as required around the engines. Putting the removable hatches on the bottom leaves the top of the model cleaner in appearance and still gives easy access to the fuel tanks. Having the engine nacelles epoxied into the notched wing for less overhang, we feel, makes for a more rigid engine mount and less vibration.

The fuselage is begun by adding the plywood doublers to the balsa sides. The bulkheads are epoxied in place, gluing only the straight-sided lower portion of each bulkhead. The top portion of the sides can then be curved in to meet the bulkheads..." 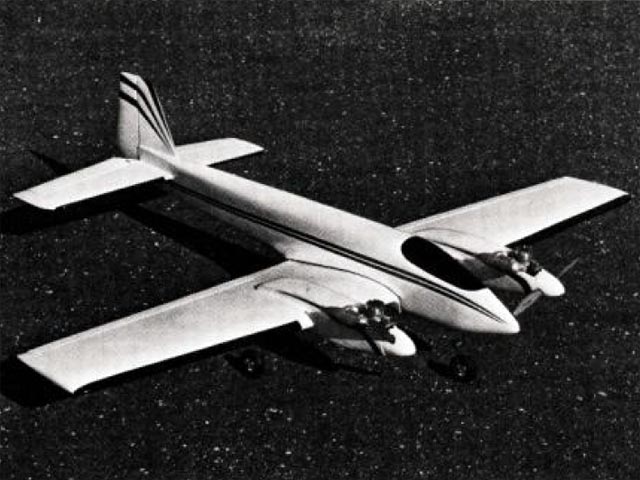