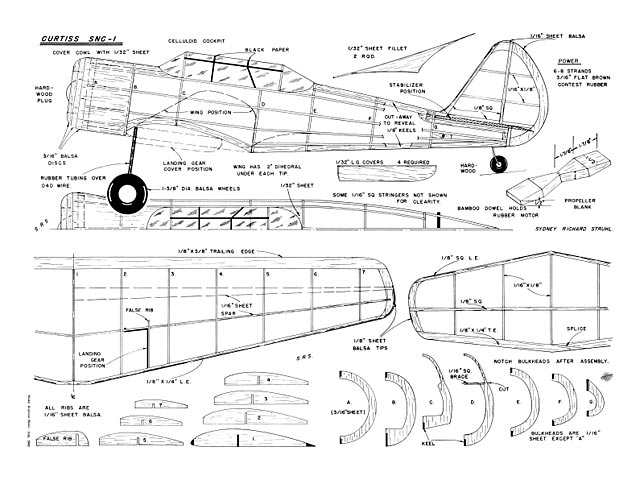 Quote: "How to build and fly a scale model of the Curtiss SNC-1, by Sidney Struhl.

IN Corpus Christi and other US Naval training centers, Uncle Sam's Naval Cadets get the finest Naval Aviation training in the world. And the ship that they train in, the Curtiss SNC-1, is one of the finest training planes in the world. We present this ship as our flying scale feature of the month.

The Curtiss SNC-1 is the military version of the famed Curtiss Falcon sport plane. This naval trainer is distinguished from its commercial counterpart by a long straight canopy. Top speed is 215 miles per hour, cruising speed 195 mhp with a 420 horsepower Wright radial engine mounted in the nose. Service ceiling is estimated at 26,000 ft, highest of all trainers except the Republic AT-12. Military training complement probably includes fixed guns in each wing, flexible gun in the rear cockpit, two-way radio and practice bomb racks.

As a model the SNC-1 leaves little to be desired; it is graceful of line and sleek in appearance, making an attractive subject for any flying scale fan. Flight proportions and of the best low-wing scale flying models of its size that the author has built.

The model is simply constructed in the conventional manner. The author was lucky enough to obtain all the required balsa except the fuselage stringers, which were 1/16 square pine. Thus the plans were drawn to incorporate balsa wood, although the structure design is readily adaptable to construction using slightly heavier white pine or basswood now being sold at most model shops. All wood and sizes should be selected carefully to assure the lightest, strongest structure possible. In the process of assembly all frames should he made with accuracy and each joint cemented firmly.

FUSELAGE: To keep the fuselage construction as simple as possible we employ the keel method. Begin by making the keel pieces. Trace top and bottom outlines of the fuselage side view to get the correct shape. Note that the bottom keel is a continuous piece extending from the nose to the tail. and the top keel is two separate pieces. Average depth of the keels is about 3/16; they are cut from 1/8 sheet balsa. Fuselage bulkheads are shown full size on the plan: they are cut from medium grade 1/16 sheet balsa. Only half the bulkheads are shown, thus you will have to make two of each pattern shown. Cut the notches for the keels only ; notches for the 1/16 sq stringers are cut after the fuselage is assembled. Mark the stringer position, however, on the bulkheads during assembly on the plans.

First pin the keel pieces into position over the plans and begin actual fuselage assembly. Temporarily cement a piece of 1/8 x 3/16 balsa between the top keels to join them at the opening created by the cockpit. Cement half the bulkheads to their respective positions and when dry remove from the plan and attach remaining bulkheads to the other side. Align the bulkheads accurately so they arc exactly perpendicular to the keels. Cement the two 1/16 sq stringers along the thrust line where a mark is provided on the bulkheads..." 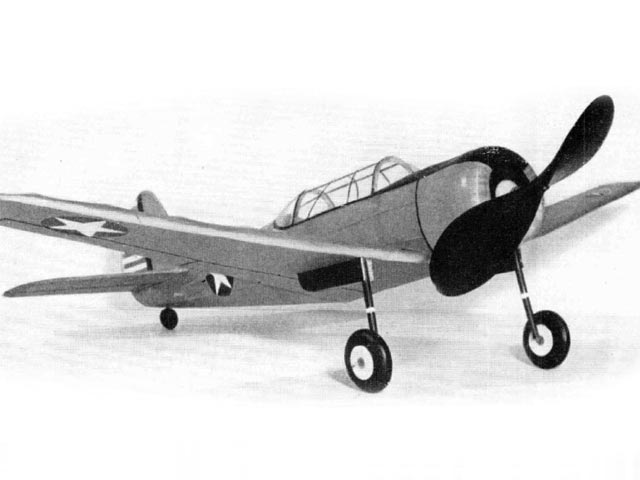