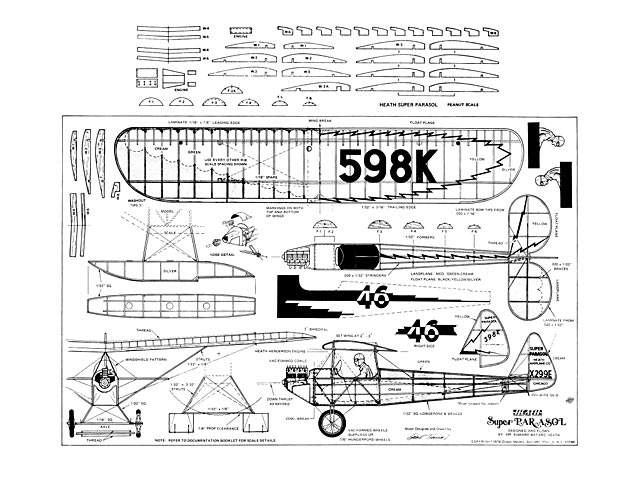 Quote: "CONSTRUCTION: Classic Models have been designed to produce a happy medium of scale appearance and light weight construction. Most of the methods suggested are typical of stick and tissue models and have been used by model builders for years.

We vary from the ordinary by suggesting several LAMINATED parts: such as wing tip bows, rudders and stabilizers. Laminations are easy to produce, affecting a much lighter and stronger structure which is less likely to warp than other type construction. The added beauty of laminated construction on a translucent tissue covered model is more than worth the extra effort some might feel it takes to produce.

Basically laminations of thin sections of wood, steamed in boiling Water or soaked in ammonia (use adequate ventilation) can be layad over any compound or difficult surface to produce a shape the material might not otherwise be able to assume.

Pins may be pushed into the plan at close intervals and the strips formed around the shape of the inner surface the material assumes may be traced from the pion and transferred to a cardboard template around which the laminations are laid-up and glued. Both methods work well, we prefer the cardboard pattern. If you have never built a model using this type construction, it is well worth the effort. Scratch builders have been doing it for years.

White glue is suitable while the wood is wet, often the laminations are allowed to dry and ordinary model cement is used after the strips are put back on the form to dry.

The Heath SUPER PARASOL has been designed to produce a 7-9 gram OUTDOOR model. Its general proportions and high parasol wing make it a super-stable flying machine, with or without floats. Models intended for INDOOR use should be built as light as possible (6 grams).

Sanding ribs and formers to a thinner section, cutting lightning holes in ribs and bulkheads, eliminating metal parts and building the tail surfaces as light as possible are all ways of producing a superior flying model. Many indoor models are covered using no dope to tighten the tissue, further lightening the model and also eliminating the possibility of warps.

BUILDING MATERIALS Most materials necessary to complete the Super Parasol are included in the kit. You will need the following tools and materials to complete the model, Clear Nitrate Dope/Brush, Model Cement, Thread or Monofiliment, Small Dress Makers Pins, Emery Boards and Sandpaper, Wax Paper, K-Acto Knife or Razor Blades, Flat Building Board.

SCALE DOCUMENTATION BOOKLET Our EXCLUSIVE booklets contain a complete history of the subject aircraft and will assist the serious scale modeller tremendously in producing a model who's scale fidelity will bring extra points at scale meets. Modellers not familiar with the subject airplane will find an interesting story about these once flamboyant airplanes, but most of all our booklets eliminate the need for the difficult research necessary to properly document a scale model.

FUSELAGE Standard box frame construction is utilized. Wax paper should be placed over the building plan to prevent cement from sticking to the plan. Build each fuselage side directly over the plan, using straight pins to hold the balsa strips in place.

DO NOT PIN THRU THE BALSA STICKS. Place pins top and bottom of the strips in staggered positions, lay top and bottom longerons first, adding verticals and braces.

USE CEMENT SPARINGLY - IT ADDS WEIGHT, NOT STRENGTH.

LANDING GEAR Landing Gear is built-up of balsa sticks as shown on the plan. Cut lending gear axle to length, slitting the ends to accept straight pins which will be used as wheel axles.

DO NIOT CEMENT PINS INTO POSITION UNTIL ASSEMBLY IS PAINTED AND WHEELS ARE READY FOR MOUNTING.

Carefully cement landing gear legs and spreader bar (axle) to fuselage, use modiam drying cement which will allow you to correct alignment of carts.

DO NOT ADD RIGGING UNTIL FUSELAGE HAS BEEN COVERED

Gray or white thread can be used for rigging which can easily be attached using a touch of clear dope. Attach one point at a time allowing ample drying time before stretching thread tight to other attachment point. Hold thread tight and apply dope, hold thread in position until dope is dry. A small hair drier is ideal to help quick dry dope.

FLOATS: Note This may very well be the only Peanut Float modal available. Do not discount the use of floats because you think they will add too much weight, or the model will not fly well with them.

Our prototype model took a close 4th Place at a FLYING ACES competition against very heavy competition. Our original model con-structed mainly of basswood longerons and stringers weighed a mere 9 grams and flew beautifully. Many people contend that the added area provided by the flat bottom floats is a contributing factor to the models flyability. Kit model constructed entirely of balsa should come in at 7-8 grams with floats and will be a conversation piece at any content or flying field.

Floats are constructed similar to the fuselage using box frame construction and are tissue covered and painted prior to rigging struts, etc. Time and patience are required to properly align struts and floats on fuselage. Pre-glue struts to near alignment using cardboard template - just before cement drys attach the four struts to the fuselage and carefully align struts and model. It may help to have the wing mounted to give you a good over-all appearance of alignment. Rig struts with thread in similar manner described in landing gear section..." 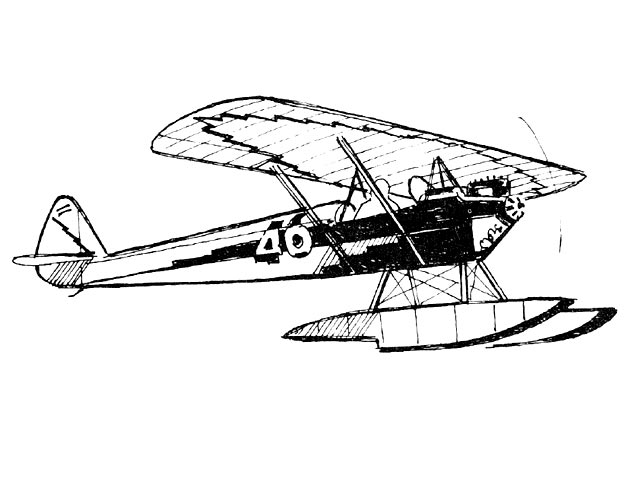