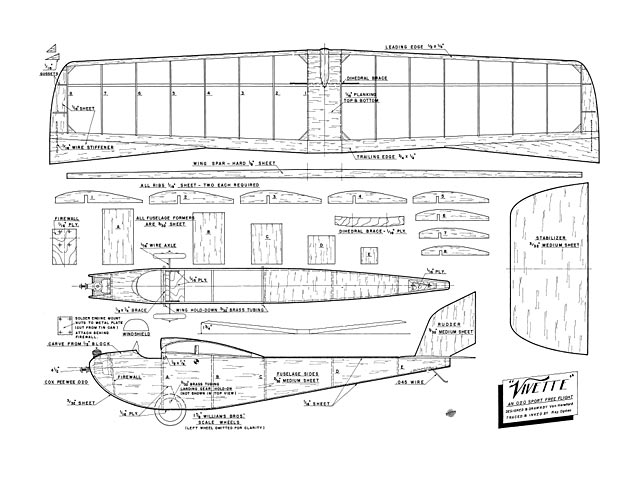 Quote: "While thumbing through some old model magazines, I recently came upon a sketch by Doug Rolfe of the 'Poncelet Vivette,' a 1923 Belgian light plane. It looked like a natural for a free flight scale, so within a few minutes I was busy working up a three-view using the sketch plus a vivid imagination. I suppose I should call my version of the Vivette a semi-semi-scale because, since building the model, another thumbing session yielded a different view of the little plane showing the stabilizer to be elliptical. To heck with it - I like my version better.

In designing the model, the emphasis was placed on flyability and durability; the Vivette scoring high in both categories.

Begin construction with the wing. All ribs are cut from 1/16 medium sheet and the spar from 1/8 hard sheet. Taper 3/4 trailing edge stock to 1/2 in at the tips and notch for the ribs. Now, wing can be assembled on the plans. When glue has dried, take the wing up, and shape the leading edge and wing tips. Block up each wing tip to required dihedral of 1-3/4 in and glue. When dry, add dihedral brace and gussets.

It is a good idea at this point to give each joint a second coat of glue. If ailerons do not seem stiff enough, insert a length of 1/16 music wire in the underside of each tip as shown on plans. Add planking to center section, and sand entire wing carefully. Brush on two coats of clear dope and sand with #400 paper between each coat. Now you are ready for covering. I used Silkspan on the original.

After covering the wing, carve the head rest from scrap balsa and glue in place. Apply four or more coats of clear dope and three coats of color dope. The completed wing may now be set aside to age while you are building rest of model.

Rudder and stabilizer are cut from 3/32 medium balsa and sanded to an airfoil shape. Stay away from feather-thin trailing edges, as warps might appear after doping.

Cut fuselage sides and formers from 3/32 medium sheet. Glue formers A, B and C to one fuselage side and when dry add other side. Pull sides together at the rear, gluing each to tail block. Snip out the metal plate shown on the plans from a tin can and glue it to the back of firewall. Drill holes for engine through wood and metal, and after mounting engine, solder nuts in place. Add formers D and E and when thoroughly dry, install firewall. Cut 1/16 plywood doublers to shape, and glue inside fuselage behind former A. Now 1/16 plywood floor should be added and notch cut to receive landing gear axle.

Sheeting may be added to top and bottom of fuselage as well as 1/2 in soft balsa block that forms cockpit and cowling. I suggest that you saw out cockpit and engine cut-out with a jig-saw, leaving outline of block slightly oversized. After it is glued to the fuselage, you can easily carve it to the proper shape..." 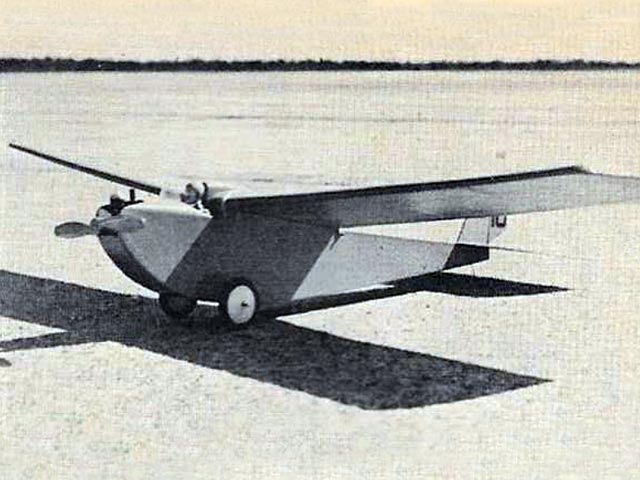 Check this out, lots of info regarding the Vicente: http://claudel.dopp.free.fr/Les_planeurs/Descript...
Tri-pacer - 11/05/2022
Magnificent website, it goes straight into my Favourites"
Miguel - 11/05/2022
Add a comment