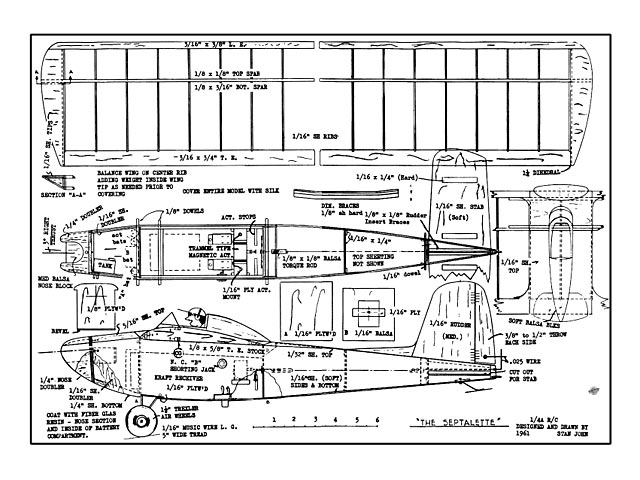 Quote: "The Septalette. 1/4A beauty, by Stan John.

This plane comes from New Orleans and represents a shrunken or non-Sanforized version of a popular Deep South midwing design, the Septal (oz9581). Named the Septalette in honor of its distinguished Cajun forbears, it is a logical extension of its larger relatives and displays the same excellent qualities. It is an advanced form of 1/4A R/C and will give the builder many hours of enjoyable flying. The design is very stable and can be flown in relatively confined areas such as playgrounds and ball parks. For ROG work, pick a nice Sunday and a large shopping center parking lot.

The originals provided the author with many summer evenings of flying at the playground down the street. Beats waiting around for a suitable Sunday and really allows one to wring out the equipment with many, many flights. We have worn three engines down to nubs in this manner. The larger versions of this ship have been primarily pulse birds also - rudder only, dual pro, and coupled aileron-rudder types.

Basic flight characteristics of all types have been amazingly similar, All have been exceptionally stable ships, sensitive to oommands but not erratic. Built as described, the Septalette will do well for you.

CONSTRUCTION: Construction of the Septalette is very simple and straightforward - weight is so important in ships of this size that complexity must be abandoned. A matter of 6 ounces will mean the difference between a sweet-flying bird and a real nasty one. Keep it simple and light and strength is no problem (within limits, of course).

The fuselage is a simple box. Construct the two sides and join as shown using doublers where indicated. After completion of the basio fuselage structure, it is wise to fiberglass the nose. Fiberglass resin is used over the entire nose section and inside tank and battery compartments. Light fiberglass cloth is used on the bottom of the nose from the landing gear forward.

The LG is constructed of 1/16 wire or dural as preferred and is of the knock-off type. Trexler wheels were used on the originals because of their lightness and shock-absorbing qualities; however, if much of your flying is from concrete, it would be wise to use l-1/4 sponge wheels for longer life.

Rudder and stab are constructed of medium and soft balsa respectively. Do not omit the 1/16 x 1/8 hard balsa stiffeners into the stab. They do much to prevent warps. The wing trailing edge is notched for the rib ends. The wing center section is sheeted on top only..." 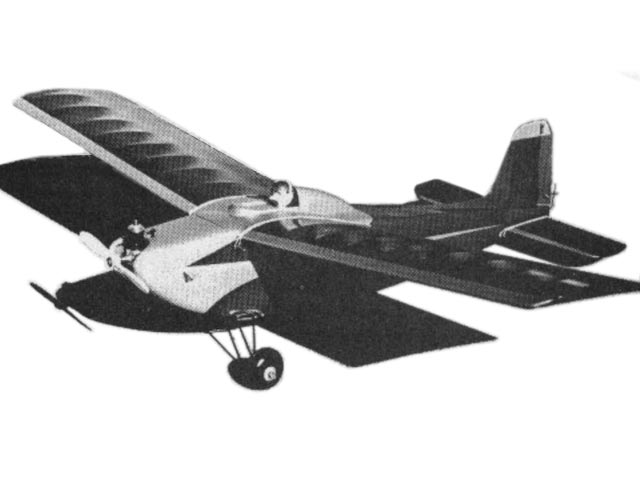