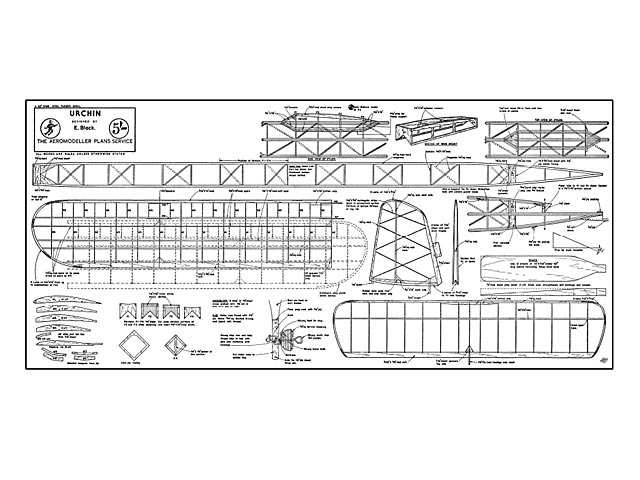 URCHIN is the 9th of a series of open rubber models, the aim being to produce a design which could be flown in a strong wind and stand a fair chance of being recovered in one piece, and also be capable of a maximum time without thermal aid.

The first five models were ultra-lightweights with long fuselages and weak motors. This layout was excellent in calm air, but inconsistent in winds, and too weak.

Number six was a smaller, sturdier model, just inside Wakefield specification, with moderate proportions and a rather large tail. This proved so successful, using a small prop and long pre-tensioned motor, that the outlines have remained unchanged to date. Urchin can manage 4i mins. with 1,000 turns (90 percent) on a freshly run-in Dunlop motor. Stability in all weathers is perfect. A larger, slower prop would increase calm air performance, but would be unsafe in the usual competition gale.

The 1959 comp flight average for Urchin and its immediate predecessor was 3 mins, and between them won, out of 10 comps, six first places and three thirds.

Commence the fuselage by constructing two sides, and assemble them with spacers, over the plan. After building up the pylon, cut away the centre of F2 and F3 and insert horizontal cross spacers. Strengthen nose with thread binding. Cover fuselage with light Modelspan, then for durability double cover from nose to rear peg. A very worthwhile modification would be to substitute Warren girder spacers for the straight spacers.

When constructing the wing, pin down LE and TE and laminate tips round closely spaced pins, packing up laminations to conform with undercamber. Fit the ribs, then set up dihedral angles. Cement the upper spars in place, then remove from the board and fit the lower spars. Cover with Jap tissue if available, or light Modelspan, and apply dope thinly until all pores are filled. Tailplane is built in exactly the same way, but very little dope must be used to avoid warps.

Fin is detachable for easy transport. Pack up edges and insert 1/32 in x 3/8 ribs. Form the root over the fuselage itself, sand to a symmetrical section, at the same time reducing the top ribs to 1/4 in maximum depth, then add the spars. Finally, dowels are added.

Propeller blades are carved to shape but the root left square. Build hub and pin it to the board, packing up about -I in. Offer up the blades to the hub, using a 23 deg. pitch triangle at tips, and cut away blade roots to fit, remembering to allow for the ply facings. Bind roots with cement soaked bandage. " 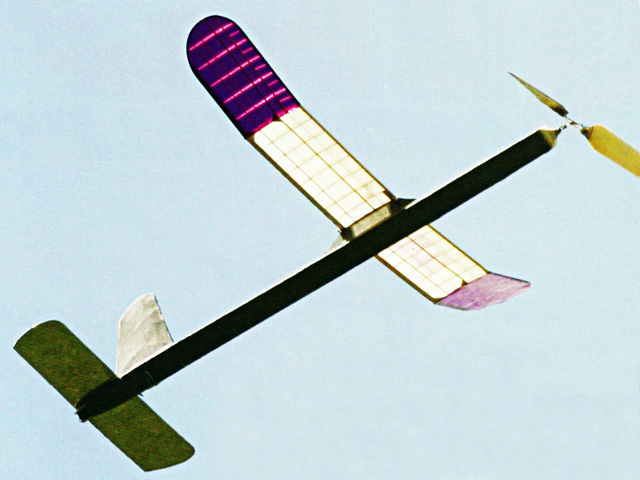