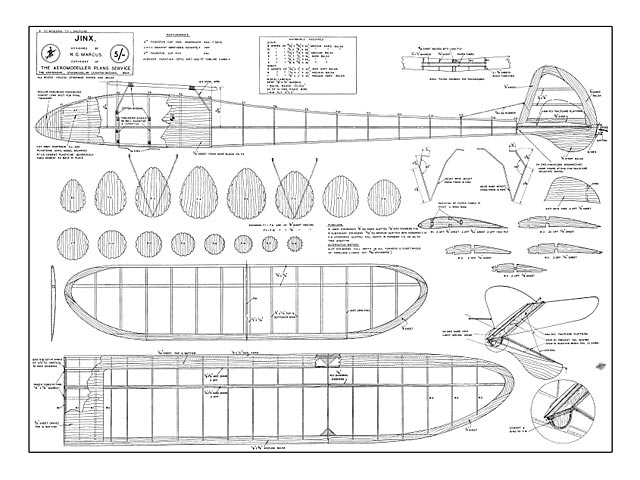 THERE are many, many modellers who firmly believe that as far as models go, to look right is to be right, although there are many models of exquisite appearance and workmanship which have never given a performance off the top of the piano - from where they reign over the living-room jointly with the aspidistra in the window. However, there are also many, many examples to prove that more often than not the eye is right - and amongst these we must number this very successful example by a youthful and expert designer, NG Marcus, whose prowess has won several laurels for his local Croydon club.

With the present spider trend, which is rapidly drifting well away from the one-time ubiquitous lightweight, we are slowly allowing appearance to get back into its right perspective. Jinx proves once again that out-of-the-ordinary performance must not necessarily be coupled with out-of-the-ordinary and often horrible, designs. This model is almost completely orthodox, but that everything about it is right is borne out by its consistent history.

The design first broke the shell in the 1946 Thurston cup, for which it was designed, and finished 6th with an aggregate of over 400 secs, the flight pattern being approximately 2 minutes, 3 minutes and 2 minutes. In the same year it flew in the LAC Cup against Northern Heights, turning in 6 minutes for the three-flight aggregate, having flown in the usual British contest weather, graced on this occasion by a howling gale.

Dusted and renovated for the 1947 season it buttoned down on the Thurston and again placed, this time one better, 5th. Altogether, on every occasion when it has had the chance of showing its consistent flying qualities, which are perhaps its most valuable assets, it has come through with flying colours and a three-minute still air average.

The model is trimmed to the near-stall attitude popular with many fliers, where the machine is adjusted until an incipient stall appears, when rudder is applied until the turn is just sufficient to cure the stall. Here another valuable attribute of Jinx becomes apparent. Its inherent stability due largely to its long moment arm takes care of this critical trim and prevents unpleasant accidents. Should a real stall develop the long moment arm takes good care of it and rapidly damps it out.

The Jinx is not really a beginner's model, but no modeller with moderate experience need fear the construction, which is indeed essentially simple.

The fuselage, which is of orthodox streamline shape and peardrop in section, is built up with stringers on sheet formers and bamboo paper covered. The parasol wing mounting is of wire and provides little extra drag. A simple and efficient dethermaliser of the lifting tail type is fitted, to give any desired length of flight. The overall length is 45 in and the original fuselage weighed 11-3/8 oz. Wings are conventional with the exception that four spars are used, the leading edge sheeting being carried back as far as the front two. The wings are made in two halves to dowel together and weigh 4-1/2 oz. The remaining 7/8 oz is contributed by the fin and tailplane to make an all-up weight of 16-3/4 oz, which gives a loading of 5-1/4 oz/square foot." 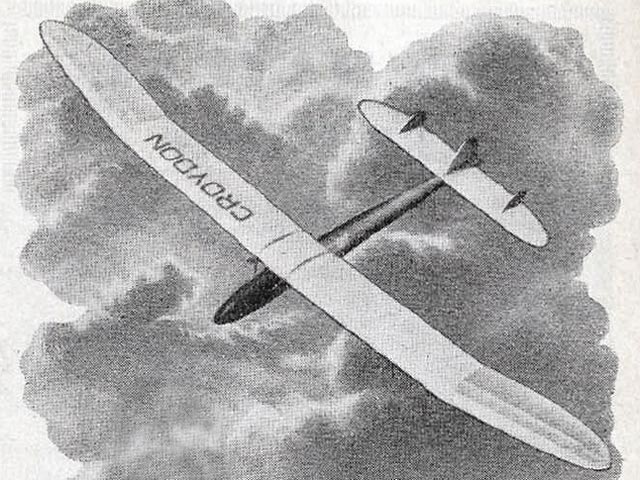