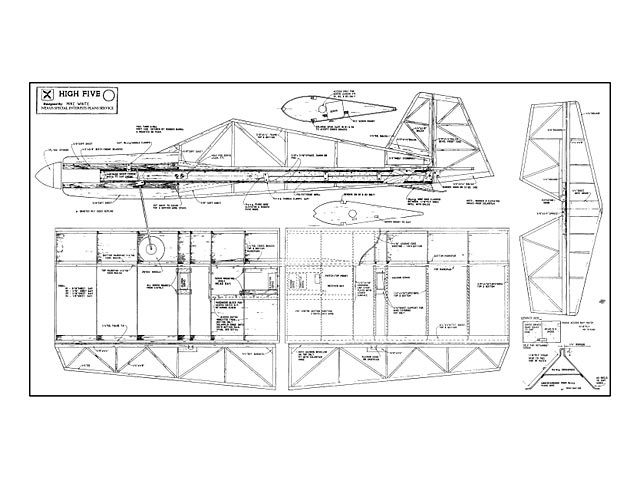 High Five is a 25% enlargement of my 'Pepper Sprout' which appeared in the September '95 issue of RCME. I was not trying to design an out and out fun fly model; there are plenty of good well designed models of this kind available as kits or plans. No, I was after something a little different, a compromise between the performance of a 'Wot 4' and one of Parc-Amber's 'fu' designs and something which was quick to prepare when I arrived at the field. With High Five all one has to do is fuel up, fire up and fly. You can fly as fast as the propeller will pull it or as slowly as it will go without falling out of the sky - that's pretty slow! It will do all you ask of it and still stay together - as long as it's been properly built!

Power chosen was an OS 40 FSR throwing an 11x4 propeller (and sometimes a 12 x 6). Any good .30 -.45 two-stroke will provide you with plenty of fun especially if you couple up to a computer transmitter. You know, they're the ones the rich kids on the block operate! Me? I now use a Futaba 'Skysport' which is all I want. When I was flying for one of the airlines we had a saying, 'Captains have to know how to Write, first officers have to know how to write a little, and flight engineers only have to know someone who can write'. Well, I know someone who operates a computer transmitter - honest!

Anyway, with the Skysport I can, at the flick of a switch (so long as it's the correct one) couple flap and elevator (up elevator with down flap) which will give loops, the diameters of which will be only a little more than the length of the fuselage. They're really just 360 rotations about the horizontal axis. Couple in some up flap for rapid touch and goes, or some down flap if you want a long floating glide at the cheap rate.

Try this one: Stand the wings vertical and apply rudder to start a climb. As it does so, feed in elevator so that the model rotates. It takes some practice though. I suppose that it is the reverse of a spin and looks really weird, I have only managed to do two good ones so far and it does take a lot of power.

Any standard size radio will fit within the wing, with enough packing to protect it. You could save a little weight by fitting a micro servo for the throttle and a mini on the rudder, although I don't really believe that the cost is justified. One item where I believe that an extra investment is worthwhile is a larger battery. With this type of model, and an 8 - 10oz tank: the servos, all five of them, are on the move continuously. With the large control surfaces the battery drain is much higher than on a normal sports model..." 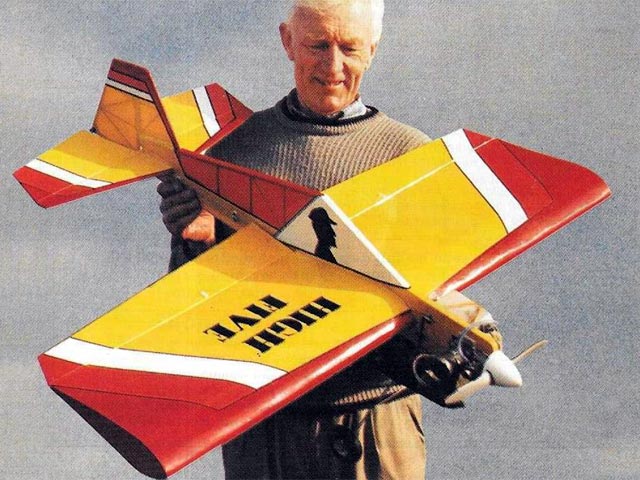