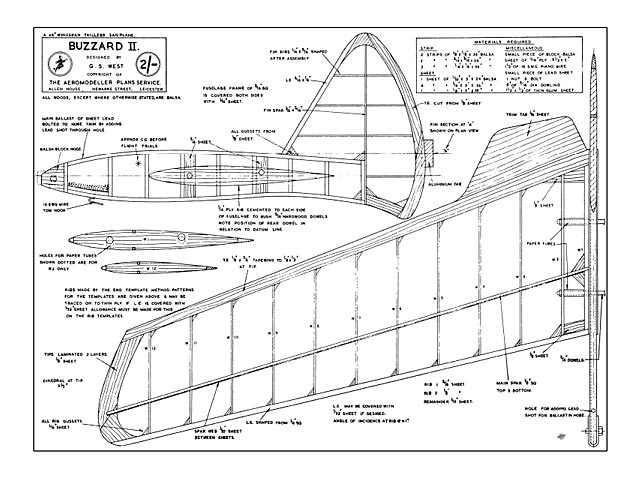 IN order that this unusual model may give a consistent performance it is desirable that the flying surfaces should be in accurate alignment and that the weight of each wing should be exactly the same.

Pod and Fin. The pod or fuselage is built first as a frame sof 3/16 by 3/16 balsa which may have to be steamed or have slight nicks cut on the inside of the curves. No strength will be lost with the last mentioned procedure as the sides of the frame are next covered with 1/16 sheet balsa. The spar of the fin is then cemented in position at the rear 'end and the ribs and edges fitted while the pod is lying on one side. The fin ribs may be fitted as strips which are sanded down to section after the cement has hardened. Plywood ribs which have been drilled for the wing dowels are now cemented in position on either side. A piece of lead 2 in by 1 in by 3/16 in, is now cut out and should weigh about 2 oz. This is folded around the nose and held in place with a small countersunk nut and bolt. The corners must now be filed and rounded off until the fuselage balances at a point 4 in from the front (without wings). Further trimming will be effected when the macfuine is complete by adding lead shot.

Wings. The wings are built by usual methods but great care must be exercised especially when covering to prevent 'warping or inconsistency of any kind. First make two thi n plywood templates for the largest and smallest ribs. Clamp these together with the spar notches lined up and drill two holes 1/16 in dia to receive the wires on which are threaded .the required number of pieces of wood to make ribs for one wing. Then with a template on either side the whole lot are carved and sanded down to shape. The spar notches may be cut before removal from the wire. On assembly, the leading edge . must be blocked up to give the required wash in at the tip. The tubes which receive the dowels protruding from the fuselage are wound on a piece of dowel of like diameter and may be either sheet celluloid or brown paper.

Covering. The elevator tabs must not be covered as an uncontrollable warping may take place. Rag tissue is advised for the wings and fin applied very evenly and given one coat of clear dope.

Tow Hook. The tow hook is formed from 16 swg wire and cemented in place as shown. Improved line stability may be obtained by using twin hooks situated on the leading edge of the wings at half span and a 'Y' shaped towline. Full sized plans are available, price 2/- (see third scale reproduction opposite) from the Aeromodeller Plans Service, The Aerodrome, Stanbridge, Beds. " 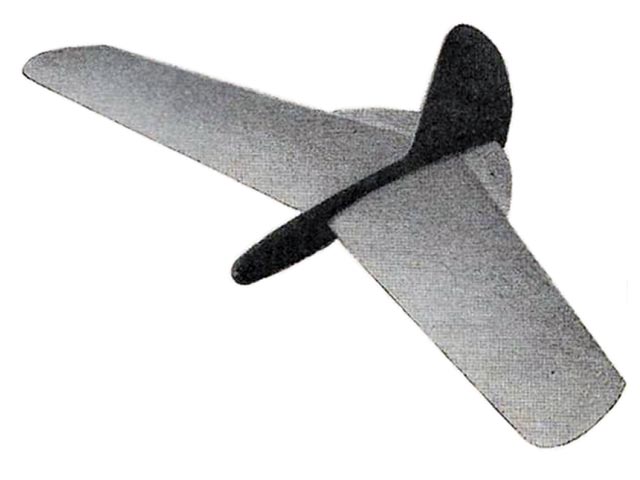