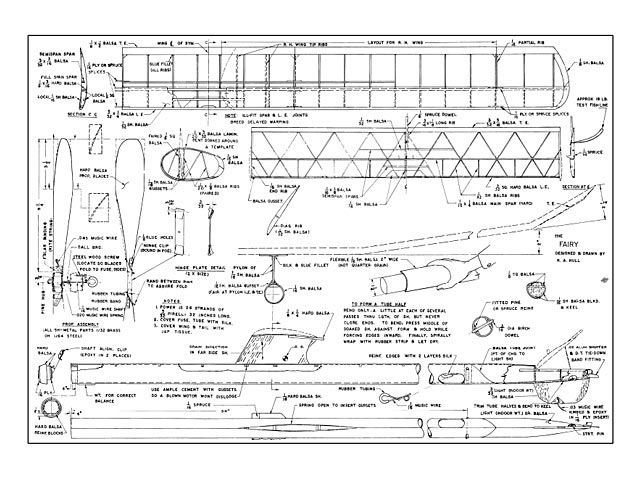 Quote: "Cleaving the gentle air to ride on high
Freed from earth's bond now for a time
To venture where enchantment is still nigh
Only to return again from skies sublime.

If you've become a little disen-chanted with a screaming, vicious, greasy little model plane power source, try rubber power and relax for a while. Rubber power makes for a good change of pace, even if you are a diehard power flier. In any case, here is an uncomplicated, well-proven and inexpensive ship that you will find a pleasure to fly.

Fairy is only a Wakefield size, fairly light ship, but one powered with a king-sized powerful bundle of rubber bands which, when hooked to a relatively high pitch propeller, gives 50 sec plus wind down time. Also, this ship has experienced many refinements which include propeller changes, fuselage stretching, wing airfoil and dihedral modifications; and the tail was replaced with a lighter one having smaller fins. Much refining, literally hundreds of flights, along with all its winnings should be enough to convince even the most skeptical modeler of the design's worth. In any case, this little ship seems to stack up OK when flown against the 300 sq in monsters. A small compass along with a little luck is credited with making it possible for this one ship to collect all 12 trophies shown in a period of about three years.

Though this ship is built on the light side, it has been flown enough so that almost all of its Achilles' heels have been located and eliminated. As a result, it won't break up every time an unscheduled event, such as a wire fence landing, occurs.

If you've come this far, spend a few more minutes and read all about building and flying the Fairy.

Choose balsa strips for the wing and tail that are fairly hard and as straight as you can lay your hands on. It is virtually impossible to get top notch consistent flying from a ship with warped wing or tail surfaces, so better choose top quality straight wood for these. The wing and tail are constructed directly over the plans laid down on any accurately flat surface into which you can force straight pins. Ribs for the wing are cut out oversize from medium 1/16 sheet balsa and sanded in a stack so they all become identical in size and shape. Be sure though, that the airfoil shape is not altered during this sanding in a stack. It is easier to cut spar slots while ribs are still in a stack. So do this, numbering the ribs so you can keep them in the same order in the wing as when the slots were cut. The spar slots will align better in the wing if you do this.

When assembling panels of the wing, be sure that the leading and trailing edges and all spar joints are accurately fitted. Preferably, cement these joints with some non-shrinking cement such as epoxy. Delay planking the wing..." 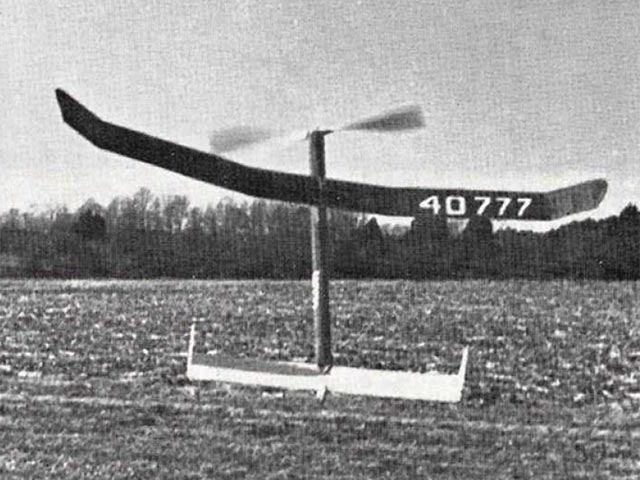