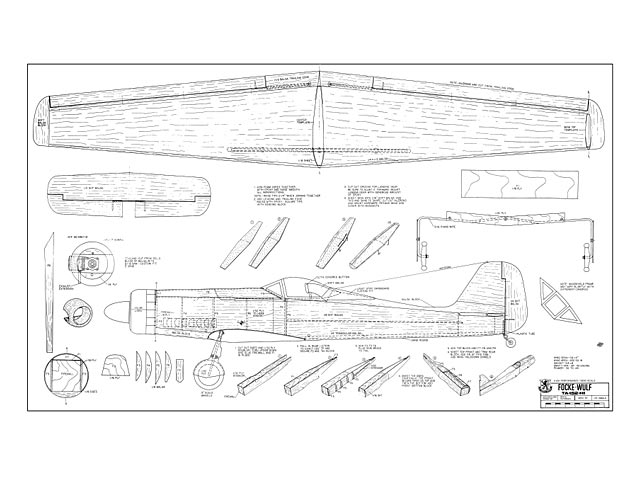 Quote: "With the introduction of the Taurus (oz612) by Ed Kazmirshi, a new age was born for radio control - a model that gave the pilot full command. The skidding turn and rudder roll was finished in serious competition. Almost overnight, the complete aerobatic pattern became possible depending on the skill of the pilot. One might say that the age of the R/C fighter was born. Inherent stability in designs became a 'no-no' (except in trainers) and words like symmetrical, track, and grooving, became commonplace. Radio control aviation reached maturity.

Models of famous fighters with silver wings flashing through the sky became commonplace instead of a pipe dream of yesteryear. Now, anything is possible, depending on the skill and daring of the designer. It is with this thought in mind that I offer the meanest one of them all - the Focke-Wulf Longnose, I say 'mean looking' because it scared the hell out of Spitfire and B-17 pilots. It was the last of the famous Focke-Wulf series and, perhaps, the finest propeller-driven fighter ever produced, flying higher and faster than its opponents. To illustrate its increased performance over previous Luftwaffe fighters, read about the following incident:

Kurt Tank, (the designer) was flying a TA-152H over Germany and was attacked by a flight of P-51D Mustangs. Kurt put it to the wall and the Focke-Wulf leaped forward, leaving the startled Americans far behind.

The first of the Longnose Focke-Wulf series entered combat in the Winter of 1943. The Longnose cowling housed a twelve cylinder Jumo engine of 2,060 hp. It regained a margin of superiority from the RAF in fighter-versus-fighter combat. Only ten of the 152H series entered combat and were used primarily to fly cover for the ME-262 jet fighters while taking off and landing. Because the Luftwaffe literally ran out of fuel, many of the Longnose fighters were destroyed on the ground. If you are one who does not subtract from a design because the creators lost in the war, you should recognize this fighter as one of the greatest.

Model Flight Characteristics: Ground handling is excellent at medium taxiing speeds. Gunning the engine will pull the nose down, so advance the throttle with caution. Take off start your rollout at low throttle. The model will takeoff comfortably at one-half throttle. If full throttle is used the model actually leaps forward so fast it will outfly the pilot's reflexes. At half throttle the ship acts exactly like a Falcon 56 with a .30 for power. There are no prob-lems with wing drop off or stalling with this model, so cool it on takeoff and the judges will love it. Once airborne, go to full throttle and pre-pare for action.

Design Changes from Scale to Improve Performance: The total area of the stabilizer has been increased ten percent to ensure pitch stability. Landing gear length has been shortened ten percent for better ground handling, especially when landing.

Airfoil Section: A unique airfoil section has been incorporated where the center of lift in the center of the wing is at the center of gravity. As the airfoil continues out toward the tips, the center of lift is moved back to fifty percent. This will give the tips a slower stalling speed, adding to stability, while land-ing at very slow speeds. It was noted during flight tests that you can approach a stall with the nose level and the wing center section will stall first, causing the nose to drop slightly. The-tips, however, are still airborne. The wings remained level until the center section recovers. This is called 'stair-step stall and recovery.' The high aspect ratio wing contributes to the excellent slow, stalling speed, but will slow down the roll rate. For this reason, full span ailerons are used.

CONSTRUCTION: Follow the drawings and photos up through the basic fuselage and wing construction. The solid block turtle back and cowling will cost you a little green at the hobby shop but is worth it. For those of you who prefer aluminum cowlings, it has been my experience that balsa cowlings give you far better performance without the usual fatigue cracks associated with aluminum. You can also sand out better air vanes around the engine for cooling. Using thinned epoxy to fill the soft balsa will give you great structural strength.

Any large bubble canopy will fit and the windshield frame must be custom fit to match it. Thin, stiff cardboard with epoxy will work well for this. When fastening the 1/16 sheeting to the sides of the fuselage, always secure the sheet along the straight edge first and let dry. Then moisten the sheet on the outside and bend it around the formers..." 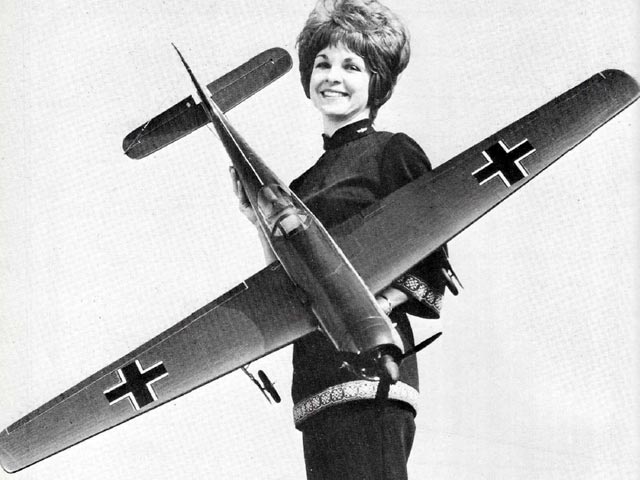