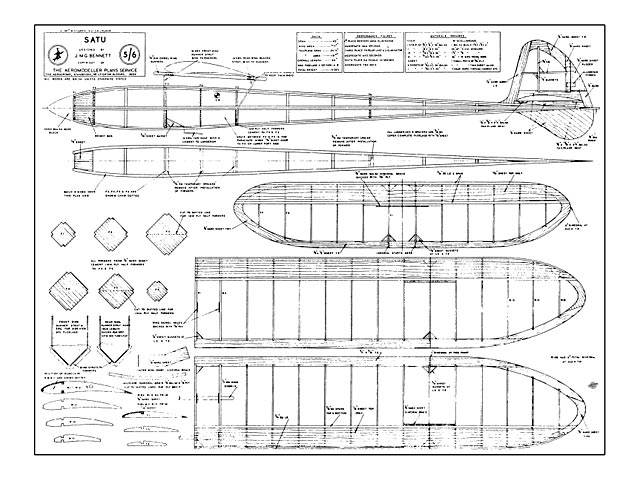 Quote: "Top Performer in the1950 British A/2 Glider Team. Satu, by JMG Bennet.

HERE is the design on which British hopes centred during the 1950 Swedish Glider Cup and it can safely be said that the failure to win this new international sailplane event was certainly no fault of the designer or his model. Leading the field at the end of the the second round in company with the Danish champion Hansen and Odenman of Sweden, Bennett was unfortunate in launching at a period when the wind dropped completely and downdrafts were very much in evidence. This, as readers well know, resulted in a mediocre third flight and he finally placed sixth in the contest, which in itself was a stout effort considering that the opposition consisted of Scandinavia's finest sailplane enthusiasts.

We were certainly impressed when, having lost his first model on the first flight, he brought out a reserve model, which, with no trimming whatsoever, flew happily away for 6 min 48 sec. The model is simplicity itself, extremely stable on the line, yet surprisingly sensitive to the weakest of air currents, which it proceeds to exploit to their fullest advantage. The original took only four days to build and is still in service after a season of flying so what are you waiting for? Get out the old balsa hatchet and start squeezing them cement tubes!

BUILDING INSTRUCTIONS Fuselage, Pick out some hard 3/16 in square and scarf on enough to each longeron to allow the joints to be well staggered in the fuselage. It is also advisable to pre-cement the joint.

For the actual construction of the fuselage the longerons are laid down in pairs and the two sides constructed together. Cut the cross-braces out in fours so as to get them the same length.

When the two fuselage sides are firmly stuck, lift from the board, sand to same profile, and then cut apart with a razor blade.

The next step is to stitch and glue the wire parasol to the second and third formers. The formers are backed with thin ply to stop the thread from splitting the formers. When the binding is really well cemented, erect the two sides of the fuselage on the formers and place the rest of the cross braces in place. The weight box, chute box and tow hook are now fitted and after the structure is sanded down, the fuselage is ready for sheeting. The nose is now cleaned up and the nose-block is glued on and carved down.

Wings. These are easy and straightforward if started by pinning down the lower spar. To get a good fit at the centre section, build one wing and cement centre rib slightly out of the vertical, join the wings by dowels and cement centre rib in other wings to fit flush with its opposite. To get the leading 'edge to 'continue round to trailing edge, it is necessary to pack up the tip with scrap wood.

The fin and tail plane do not need any explanation, the only point being that the joint between fin'and fuselage should be fared in with rag tissue and cement to strengthen the joint.

Finishing. Flying surfaces covered with double-strength tissue and two coats of dope. Fuselage - four coats of banana oil, sanded between each coat (or colour to taste).

Flying. Trim in the ordinary way, using the CG on the plan as guide. The model is stable on the line when the turn is not too great, so a medium has to be found between towline stability and turn. " 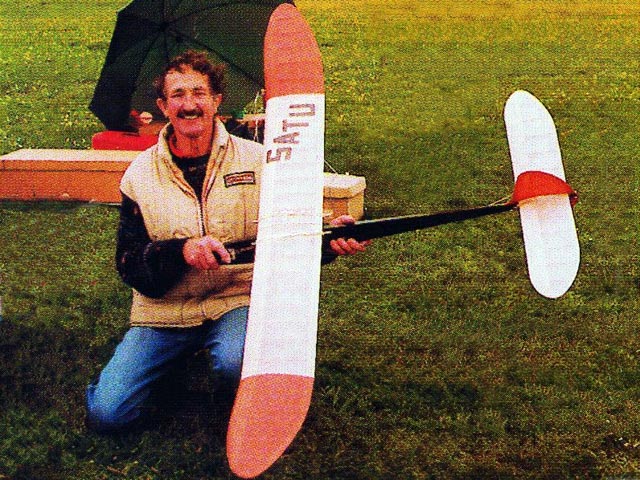