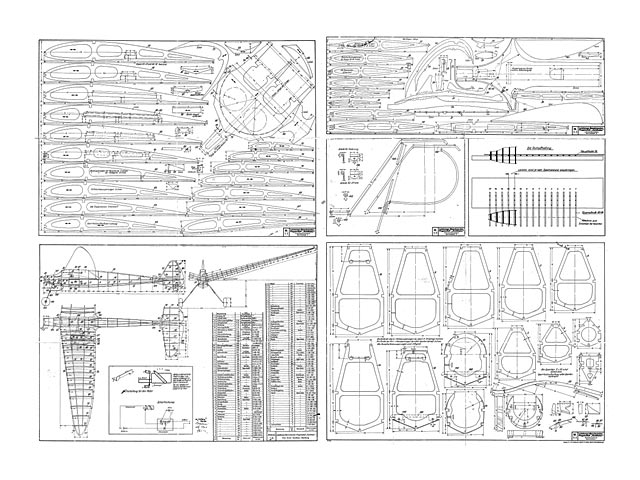 Update 09/09/2013: Have re-sized this plan up to correct scale as original, thanks to ghostler. Note the formers are shown at full-size whilst the main layout drawing is shown at 1/5 scale.

Quote: "Kit Review. Goldhahn, by Rainer Eckert. A replica kit of the famous German large-scale model designed in 1942 and now manufactured by Aeroplan.

It all started two years ago with the Hast, my first antique soaring model (refer to Q&EFI, May 2002). Despite quite some time down in the workshop and lots of challenging problems, I managed to get this elegant soarer - designed in 1935 - airborne and enjoy flying this vintage beauty. Meanwhile the German manufacturer Aeroplan (www.aeroplan-modelle.de) released another replica kit called Goldhahn (the Golden Cockerel). Although I knew that this powered model would even take more time to build, I couldn't resist it and ordered the kit. It's clear that I must have been caught by the AMV (antique modelling virus). This model turned out to be the final examination to become some kind of a 'master craftsman in antique modelling'. Did I pass or flunk the exam? Judge for yourself!

The original plan was drawn by Erwin Goldhan (watch the spelling without the second 'h'!) and published in 1942 in Germany by CJE Volckmann. The Goldhahn, having 2.31 m of wingspan and a fuselage length of 1.47 m, was one of the largest powered models known those days. It was designed to take a Kratmo 10 2-stroke engine with 10cc capacity having a maximum output of 0.35 hp. This very popular engine had a battery-powered ignition with a real spark plug. The model's starting weight was in the region of 2.7 to 3 kg. After take off it climbed the skies for two to three minutes with the engine running at full power until a mechanical timer called Autoknips (originally designed for cameras) cut off the ignition voltage. Then the Goldhahn started to find its way back to earth as a glider for another eight to 10 minutes. In order to land softly, the landing gear was designed with sprung suspension.

While reading the original instructions I started to admire those former Goldhahn owners, who dared to entrust wind and clouds with an uncontrolled powered model having 6 lb of weight! The introduction reads: 'The model will take off after 4 m on the runway... its climb rate is high enough to reach an altitude of 200 m after one minute. The ratio between flight time with the engine running and gliding is in the region of 1:4. Test showed the wings are strong enough to perform even loopings'.

In those days this model was seen quite often at competitions and a lot of proud Goldhahn owners were amongst the winners. I liked the chapter 'Flying in' at the end of the original instructions which tells you what to do if the model is not trimmed correctly. How the model should be able to land undamaged despite wrong settings of down-thrust, CG, trim of rudder or elevator, etc, is not covered! At least, today, we have radio control systems, although with R/C, things can go wrong, too!

Just like all the other Aeroplan antique models, the Goldhahn construction kit is of excellent quality. It contains copies of the original plans from 1942 (full scale drawings of all single parts plus 1:5 plans of the completed model), a copy of the original set of instructions, all the material to finish the structure (ie a lot of pinewood strips, plywood ribs, formers and blocks), piano wires to make the landing gear plus 0.4 mm ply-wood sheets to plank parts of fuselage and tail wing. A real feast for woodworms!

Formers, ribs and wing tips are CNC-milled and packed separately in plastic bags according to the different building stages, a luxury the original kit did not have 60 years ago. Elevator and rudder are enlarged and a universal engine mount provided in case you are not going to use an original Kratmo 10 engine! But that's about all the help you get - the remaining work is still much the same as it was in 1942!

The additional set of instructions coming from Aeroplan read: 'Due to the fact that there are a lot of different ways to install the R/C components, we decided to not include any accessories like servo trays, bowden cables, etc, it is up to the builder how and where to place servos and the Rx.'

On the one hand Aeroplan's point of view is under-standable, on the other hand the modeller is forced to invest a lot of thinking concerning RIC gear and finding the appropriate drive set. But it's no use complaining: Building antique models implies that you have staying power, a bit of know-how in the fields of aerodynamics and building techniques and - most of all - that you take it easy!

Having decided to go electric, finding the optimum drive set was easy as I had professional (and friendly!) support from the German manufacturer Kontronik (www.kontronik.com), where Michael Franz helped me along. He suggested a brushless FUN 480-28 motor, a 1:5.2 gearbox, a folding Aeronaut prop (38 x 33 cm) and special prop blade adapter with a negative pitch of -2.5° (also from Aeronaut). The goal was to fly my Goldhahn on just 8 cells of 2400 mAh, and to reach maximum flight times. I also ordered a Beat 40-6-12 BEC speed controller.

How was I to marry that high-tech motor with the antique fuselage? The answer was to lengthen the fuselage by 70 mm by means of another former and longer stringers, design a new bulkhead to take the electric motor and place the battery pack directly behind the first former after the new bulk-head! To find the optimum position..." 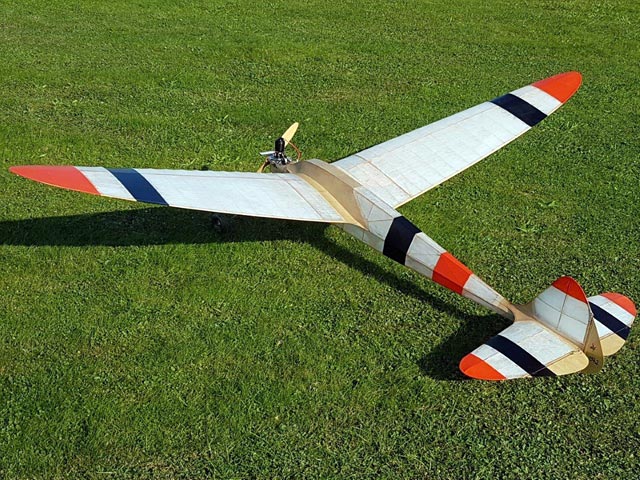