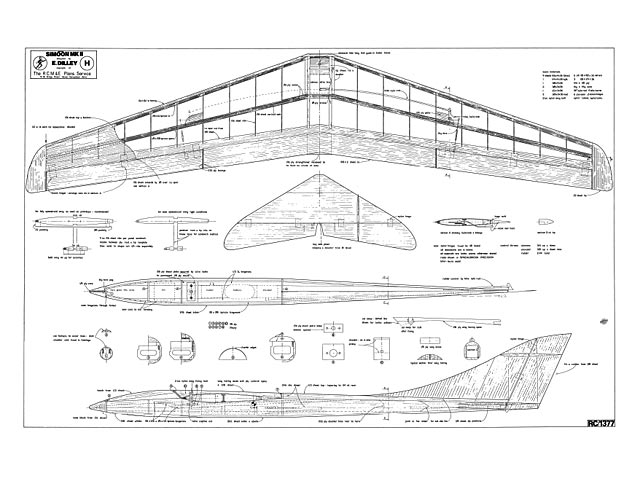 Quote: "SIMOON represents two years research and the results are, to say the least, remarkable. The model offers all that is desirable from a modern slope soarer, a fast, precise, low drag glider coupled with futuristic lines. The quintessence of Simoon is a 20° swept wing which decreases frontal area, and thus drag for a given wing span, whilst ailerons give superb axial control. Tight loops can be effected with less likelihood of stalling the wing, a common fault with many aircraft.

These advantages occur with sweep angles of up to 20° as I have discovered to my cost! Any extreme angle such as 50° has a detrimental effect on both looping and stalling characteristics, resulting in a higher stalling speed, which automatically indicates overall higher flying speeds. Aerobatic manoeuvres require very high speeds demanding much faster thinking and reaction times. Loops become difficult to accomplish without a flick roll at the zenith when the relative airspeed is minimal. I learnt this from a 50° swept wing which preceded Simoon, and on these results I decided to choose a 20° sweep to yield the best all round performance.

On these lines. Simoon was born with a really sporting acrobatic performance. The stalling speed is low, so much so that in a 20 mph wind, Simoon will hover quite happily, and even fly backwards!

So far l have discussed Simoon with a fully symmetrical section, there is also the option of a semi-symmetrical aerofoil which allows the less experienced pilot more time to react in tricky situations. To sum up, the sermi-symmetrical section results in more inherent stability, while still retaining a good acrobatic repertoire. If you decide to be daring, on the other hand, and build Simoon with the fully acrobatic wing, you will certainily have many exciting flying hours!

Building: For ease of construction Irecommend that the building sequence is read through liaising with the plan before building is commenced. PVA white glue was almost exclusively used for strength and lightness.

Start by cutting two fuselage sides from two well matched pieces of 3/16 (4.5mm) sheet. If you build the semi-symmetrical wing, it will be necessary to adjust the wing mount to suit it. For the full length fuselage sides. it is necessary to join two pieces together at the tail end and reinforce with a 1/32 (0.8mm) ply doubler. Pin them together and sand so each is identical in outline. The spruce longerons and triangular pieces can now be added onto each side..." 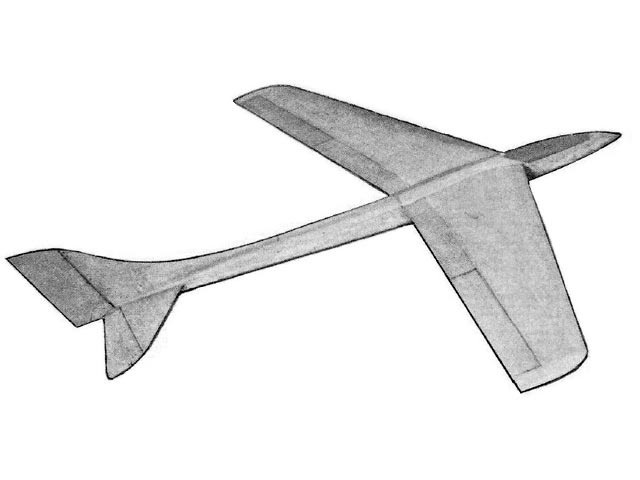