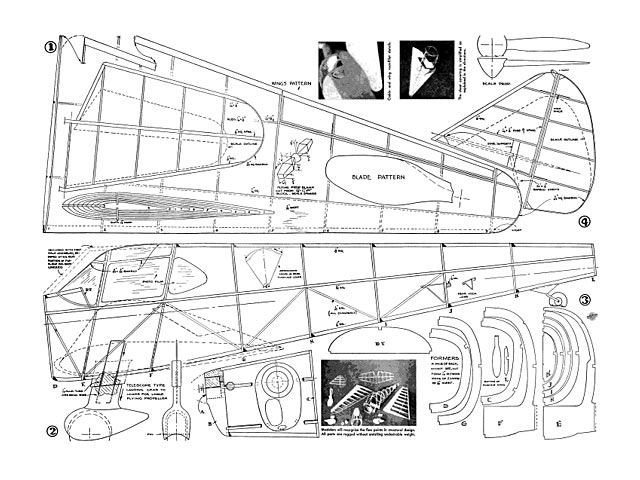 PRODUCTION has just been started by the Ryan Aeronautical Company on the two models of the new S-C three-place sport plane. The only difference in these two models is the choice of a Warner or a Menasco engine. The performance of the ship is approximately the same with either engine, top speed being 150 mph and landing speed 45.

The Ryan Company is a pioneer of metal construction in planes, and in the model of the Menasco powered S-C it will be noted that the metal fuselage is simulated, together with other external features. The model is larger than usual and of simple construction, and due to its size, makes longer flights than could be expected otherwise.

FUSELAGE Prepare a 6 x 8 in sheet of 1/16 balsa plywood by cementing cross-grain 1/32 sheets. Keep this weighed down several hours to dry, then cut out the formers in pairs, except DT, which can be cut from 1/16 sheet.

Pin the top and bottom longerons to the drawing and cement the formers to their respective stations. The drawing shows a continuation of the top longeron to aid in assembly. This is cut away just before covering the fuselage forward of F. Bend a strip of 3/32 sq so that it will lay in the former slots without forcing, then cement it in place. Cement 1/16 sq diagonals between the formers from the bottom longeron to the middle longeron. After this is dry, remove from the drawing and build the other side directly to it in the order the first half was made. Include the rear hangar as F is cemented on.

Since there is no bulge in the fuselage to the rear of former F, the sheet covering can be wrapped around the frame like a cone. Cut 1/32 sheets diagonally to form an oversize pattern similar to the miniature pattern on sheet 2, in a dry state at first, then when the setup is satisfactory, cement the parts together. When dry, cement the top longeron to the center of pattern. In other words, invert the frame and cement it to the blank. When dry, wrap the cover around the frame and trim away the excess sheet, then cement members that will touch the sheet, and with rubber bands bind the cover to the frame. Cover the frame forward of F with narrow sheets.

Cement plain #1 ribs (1/16) to the stubs of E and F in the position shown by the broken lines of the rib on sheet 2. Cement the fillet sheets on. These must be made by cut-and-try with pieces of paper, but the final appearance will be noted by reviewing the photos.

Cut away the temporary top longeron, complete the top of the fuselage front..."

Plan assembled, stitched together and cleaned, from raw scans at http://www.theplanpage.com/Months/2211/ryansc.htm 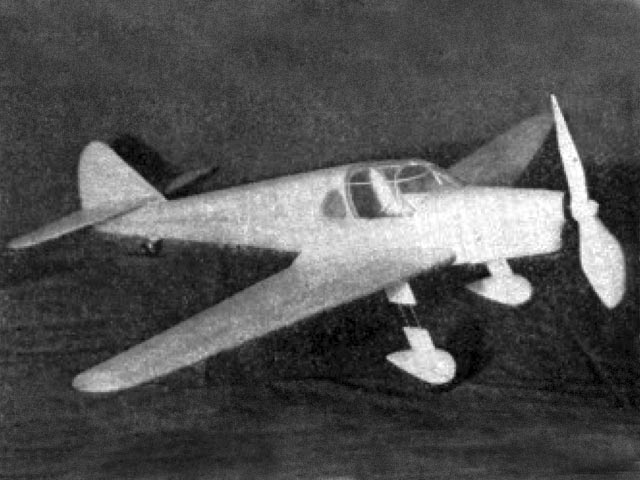