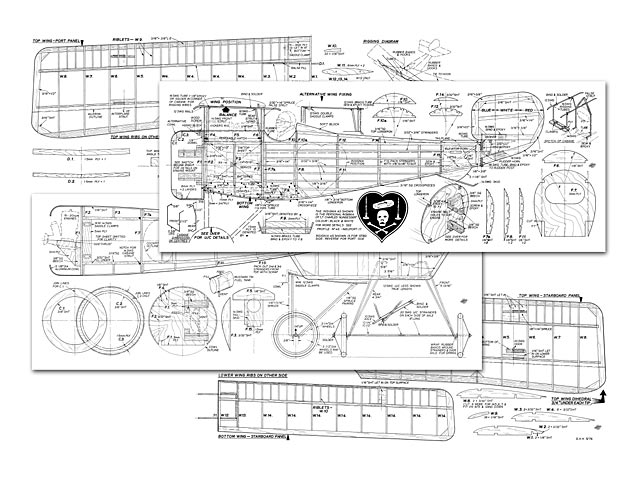 Quote: "MY LOVE affair with the WWI Nieuport models goes back to my pre-teenage period whan modelling this era of aeroplanes usually meant solid models of wooden variety. I have distinct memories of scraping away at pieces of boxwood to emulate the under-camber of the wings and of the many moments of frustration in trying to affix the top wing to numerous struts fashioned from pins. Fortunately, no examples remain of these early fumbling efforts to mock me - there is something to be said for plastic kits after all.

The first diversions to flying models of the Nieuport came with the publication of LC Bagley's free flight model in 1948. This design, fitted with the ever reliable Mills 1.3 cc diesel and featuring the, then, novel pendulum control of rudder was a delightful, although somewhat unpredictable flyer. Despite, or perhaps because of the pendulum control, the Nieuport 17C would occasionally get into a side slip and proceed to knife edge around at low level very realistic but disconcerting to the spectators.

My next venture into Nieuport taming came with the introduction of reliable single channel radio equipment and the first of the Nieuport 24 models was conceived. The results were disappointing as the model exhibited the apparent vices of the original Bagley model ie gradually turning into a torque induced spiral dive and the radio controlled rudder seemingly unable to correct it. I did eventually trim the model out by adjustments to the engine side and down thrusts and wing washout. The one good flight resulted in radio failure (with the rudder at neutral) and an excellent free flight terminating in a tree.

The model was retired to the attic and remained there until a desire to fly something at the Old Warden Scale Day led me to refurbishing it. This time I fitted a Min-X/Rand galloping ghost radio combina-tion giving me rudder and engine control and the Nieuport behaved impeccably. Engine control (Enya .09R/C) gave a good climb and descent variation and the only detraction was the ever waggling rudder. The model was duly flown at Old Warden, eventually being passed on to a fellow club member. It is still given the occasional outing - over twelve years after first being flown - now fitted with two function proportional.

The present Nieuport 24 is, therefore a direct descendent of the 1948 Bagley design and some of the features, ie symmetrical section bottom wing, can be traced to the original plan. Naturally, the structure is now in keeping with the additional strength required with a heavier radio controlled model. It is not a difficult model to build, but does take more patience and care than the average balsa or foam and glass fibre model - the rewards of flying the completed model are also considerably higher!

One of the two prototypes was fitted with an OS 15 R/C engine and the other with a Veco 19, both gave more than adequate power. The OS 15 powered Nieuport, built by Bert Smith, was covered in FliteCote Silver and featured 'banded on' top wings. Total weight was 2 lb 10 oz. David Toyer's model used the fixed top wing and, with Horizon three function radio, weighed about 2 lb 14 oz. Weight up to 3 lb 6 oz should be perfectly acceptable but, as always, keep the model as light as possible. Do not be tempted to start 'beefing up' the structure as this will only increase weight at the expense of good flying characteristics and heavier models crash harder!

Both models flew 'off the board' with only minor trim changes - more down elevator - required. At full power, the Nieuport will really stick its nose up and you must be prepared to feed in down elevator. With a lower engine setting, however, the elevator may be centralised. This for .15-20 motors and 2-3 function radio is a common feature with this type of model.

Before you put pen to paper let me assure potential builders that, yes, that much side thrust is required!

The fullsize Nieuport 24 was an intermediate type containing some of the features of the earlier type 17 and also of the later 27 version. Basically, the 24 was a 17 with a more rounded fuselage, more powerful engine (130 hp Le Rhone) and modified top wing shape. Some of the 24 versions were built with tail surfaces to the shape of the well known Nieuport 28. Although the 24 was inferior in performance, in most respects to the contemporary Spads it was prefered by some pilots because of its manoeuvrability.

Amongst the devotees of the Nieuport was the French Air Ace Nungesser and it is his aircraft that is used as the subject for the model. His famed insigina and bold red, white and blue stripes, make it a colourful aircraft to model. British and French Air Forces used the Nieuport 24 but, as far as I am aware, all were left in the silver doped finish of the manufacturers. To be authentic therefore you have the choice of finishing the model in silver with red white blue roundels or silver with blue white and red roundels!

I do not claim that this is more than a 'stand off' scale model, the outlines are as scale as my research will allow but some dihedral is introduced to the top wing to allow good control, by rudder, without having to resort to ailerons..."

Quote: "Hi Mary and Steve, I've attached plans for a Nieuport 24 from RCME in July and August 1976 by David Boddington. The only version of this great looking plane that is currently showing up on OZ is a C/L version so hope this R/C version is of some interest. The plan was originally published / printed on good quality paper so hopefully the scan reflects this. I'll email the article scan separately. Your website and efforts are really appreciated. Best regards, Paul D." 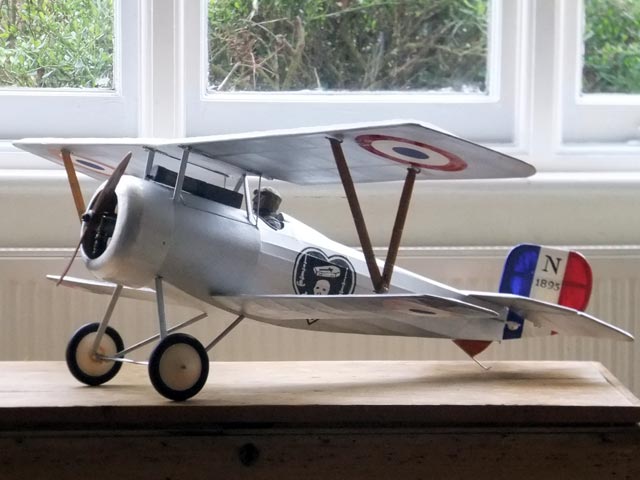 Thanks for publishing this plan, it has to be one of my all time favourites, ideal for an electric conversion with today's technology.
John G - 07/05/2019
Add a comment