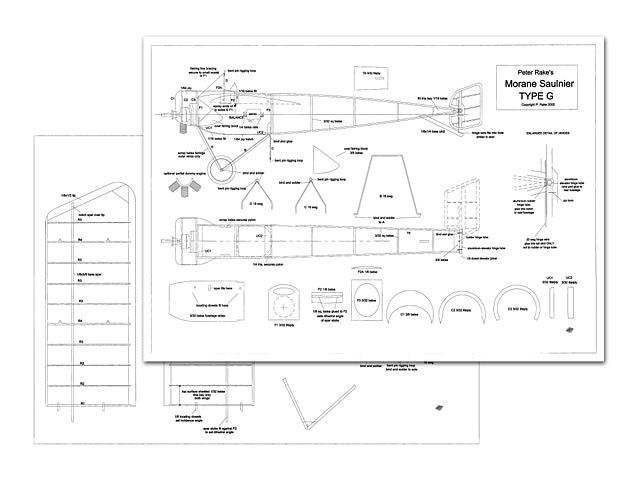 Having completed a model of the Moska MB, and been quite pleased with the way it looked in Russian markings, I suddenly recalled that somewhere on my computer I had some schemes for Morane Saulnier Type Gs in Russian marings. The fact that 1I already had a plan drawn for, what I believed to be, a Morane G really clinched the matter.

After much searching, for the wrong subject heading, I finally located the colour schemes - only to discover that the plan I had was not, in fact, a Morane Saulnier Type G. Okay, no major problem. It was pretty close to a 'G', sufficiently so that it wouldn't take too much modification to get me where I wanted to be. It just means that I now have an indeterminate Morane Saulnier racer plan awaiting a build too. A sort of 'build one, get one free' type of thing.

The model: As is normal for my designs, the model is a one-piece structure. As is becoming more common, it was designed around the Air Power 300XT brushless motor. I used the 'reverse' version because this comes with a radial mount and is better suited to this style of model.

Power is provided by a two-cell LiPo pack of a comparatively huge capacity. Not only does using a large battery capacity mean that we have sufficient weight to balance short-nosed subjects, it also provides us with nice, long flight times too.

Although not intended as a 100% accurate scale model, the little Morane does have quite accurate outlines. Whilst the structure and wing section have been changed to keep the build easier, the model still conveys all the essential character that defines it as a Morane Saulnier Type G.

Equipment and installation: As anyone who follows my construction articles will be only too aware, I like to start by letting you know what equipment I used for my model. That way, if nothing else, you know just what will be required before you begin building.

Since we've already dealt with which motor I used, let's take a quick look at the rest of the gear used, before investigating how it was installed in the model. The LiPo pack is, I believe, a Kokam 1500 mAh pack, although any similar sized pack would be perfectly acceptable. The receiver is a Jeti Rex 4 micro job, the ESC is a Jeti 08 and the servos are two 4.3-gram examples.

Since the installation of the servos, receiver and ESC are pretty straightforward I'll deal with them first. The servos are either screwed, or glued, to balsa rails that are then glued into the fuselage. The receiver and ESC are attached to the fuselage sides using servo tape. Although not the recommended method, but one that I have found safe enough, the LiPo pack is secured with a small amount of silicone sealer once its weight has been adjusted to help balance the model. Therefore, obviously, it will be the very last item to be installed.

The motor mounting system is slightly more complicated, but not by very much. Because of the need to space the motor from the firewall, bringing the prop driver into the correct position, the 1/8 ply mount glues to a similar sized piece of 5/16 or 3/8 balsa.

Before gluing the balsa to the firewall, bevel the front face to provide the correct thrust lines and epoxy the ply mount to the bevelled face. Then, once the mount unit is epoxied to the firewall, the motor may be screwed directly to it. Whilst these parts may be rectangular, circular ones will make it easier to hide them in a dummy engine.

Linkages to rudder and elevators are from 20 lb strain fishing line running direct from the output arms to the control horns. Tube crimps and small spots of cyano secure the ends. I used small pieces of slotted hinge material to reinforce the covering at the cable exit points, glued to the covering and painted to represent the typical reinforcing patch of the period.

The access hatch, which has proved plenty large enough, is retained by a ply tongue at the front and a wire in tube catch at the rear. A small piece of rubber band glued around the wire helps to ensure..." 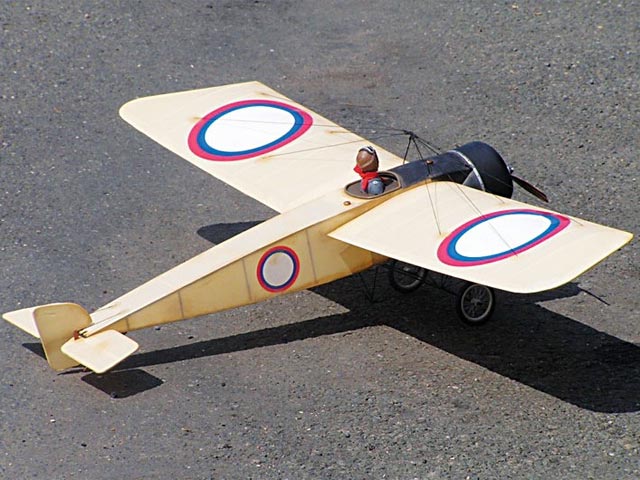