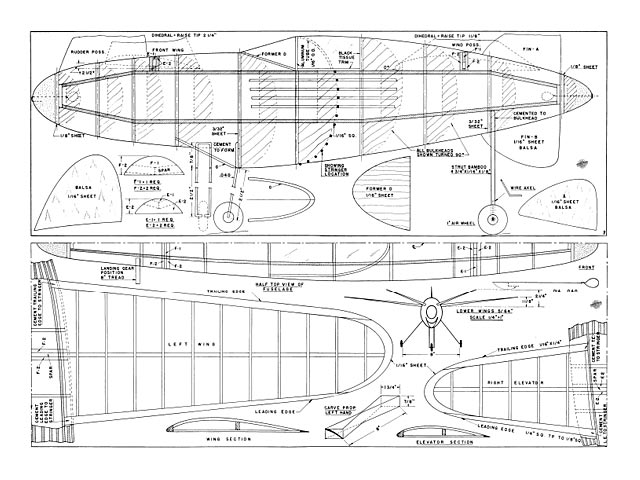 Quote: "FLY A FIGHTER OF THE FUTURE. Vital features required in all canard airplanes - and how you can build a flying model of a possible future Army canard pursuit. By CHARLES H. GRANT and FRANK EHLING

RECENTLY the United States Army, in search for more efficient, high performance aircraft, investigated the possibilities of some unique designs. A number of them were discarded as impractical or offering no advantage over present types; one of these was a canard pusher pursuit plane pictured on this page (right lower picture).

Whether or not this plane was considered representative of canard type designs is not known: however, experienced model builders will unquestionably note a number of basic errors in the conception shown here. This doesn't mean that an efficient canard type pursuit plane cannot be made, but rather that certain vital requirements of this type of ship have been overlooked in the Army design.

Most full scale canards incorporate one vital error, namely, that the center of gravity is not far enough forward. Naturally this is not obvious to the casual observer but it makes such a ship extremely dangerous to fly. When the CG is far back the plane stalls quickly and suddenly tail-slides. Early fliers of this type of ship were content with correcting this condition by means of the controls rather than correcting design.

The Army design here flaunts the bugaboo of the stall also in respect to another feature. namely, the elevator. It is essential in such a ship that the front wing stall before the rear wing. To provide this condition the front wing, or elevator, should have much more dihedral than the rear, or main wing. Thus at slow speeds, or when in a stall, the air spills out from the front wing allowing the nose to drop and the ship to regain its equilibrium. The front wing of the design shown would snake this plane impractical.

Another glaring error, from the pages of model building experience, are the vertical fins placed at the rear of the ship - without a fin at the nose. With these two large fins at the rear the ship cannot be controlled or steered directionally; or at least, such control would he very unsatisfactory. To make a turn with this type of ship it is necessary to move one end in one direction or the other, to create directional displacement and thus enable the ship to turn. To move the end at which the propeller is located is practically impossible; it would not only destroy propeller efficiency, but this end would be too close to the CG to move it effectively..."

Plan stitched together from The Plans Page scans posted online at http://www.theplanpage.com/Months/2005/2005.htm 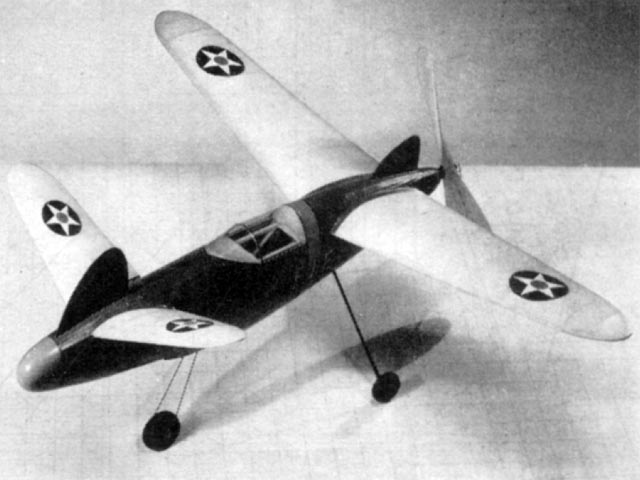