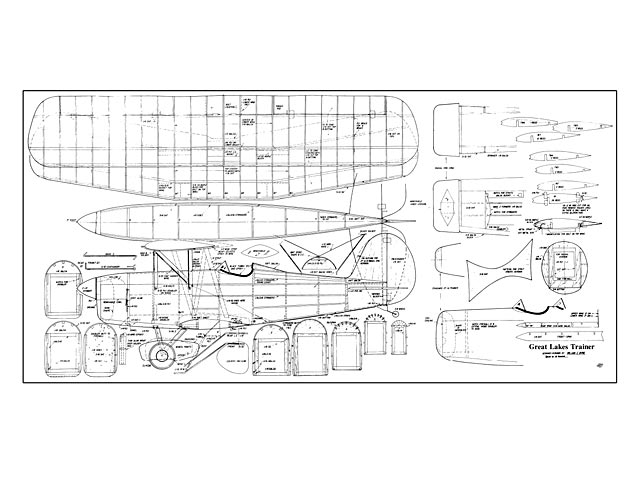 Quote: "Stand-off scale at its best and a fine stepping stone into the new and exciting Biplane Pattern event - a winner from its very first contest! Great LakesTrainer, by William Borie.

The Great Lakes Trainer was manufactured for only a few short years, from 1929 to 1932. Yet few airplanes have endured so well or thrilled so many people as this great link biplane has at airshows throughout the US. Of the 200 or so manufactured, about one-fourth of them remain flyable today. This, in itself, is quite a tribute to the airplane.

The original power plant for this aircraft was the Cirrus four-cylinder in-line engine in various models ranging from 80 to 95 hp. Wing span was 26 feet, inches and length was 20 feet, 4 inches. The Cirrus engine was not reliable enough nor did it have the power needed for airshow performance. Engine modifications for this purpose have included installation of Lycoming, Warner Super Scarab and Menasco power plants ranging from 125 to well over 200 hp.

Among the more famous acrobatic pilots to use the Great Lakes was Tex Rankin, Clyde Parsons, Harold Krier and Bob Nance. Clyde Parson's Great Lakes was fitted with a 200 hp Menasco inverted engine to make one of the most beautiful biplanes around. Harold Krier used a 185 hp Warner engine in his ship and with this combination won the National Acrobatic Championships in 1958-59-60.

I have always had a weakness for biplanes, and after seeing a picture of Clyde Parson's Great Lakes Special in an aviation magazine. I knew that this would have to be my next R/C model. The Great Lakes design was one of the first light planes to use a semi-symmetrical airfoil, which is one of the reasons for its success in airshow work. A closer examination of the design shows ample gap between upper and lower wings, plenty of stagger between the wings and large tail surfaces. Nose and tail moments appear to be right for a good stuntable model, and the thrust line is near the half-way point between the wings. I also feel that the sweepback in the top wing helps the model to 'groove' better in the air. All of this is not a very scientific approach, but I am a firm believer in the theory that if it looks right, it is right! Anyway, it has surely worked on this model.

I have built stand-off scale versions of both Clyde Parson's and Harold Krier's Great Lakes Specials. Both versions have been fine flyers and a great source of satisfaction to me. I powered Parson's version with an Enya 45 and flew this model for over three years until retiring it last summer. Having had so much enjoyment from this model. I decided that I had to build another Great Lakes. This time I decided on a model of Hal Krier's ship to be powered by a Supertigre 60 engine. I had about reached the halfway point in construction early last November, when a friend and fellow R/Cer. Mac Wheeler, dropped by one evening to tell me about the Annual Spaceport Scale R/C Contest coming up the end of November over at Cocoa, Fla. Until then, I had never considered entering the model in competition: I just like my models to resemble their full-sized counter-part. I did agree before he left that evening to try to have the model ready in time for the contest. Fortunately, I still had a week's vacation remaining which I took the week before the meet. Even with this extra time. I worked night and day up to 1:30 am the morning of the contest in order to get the model completed..." 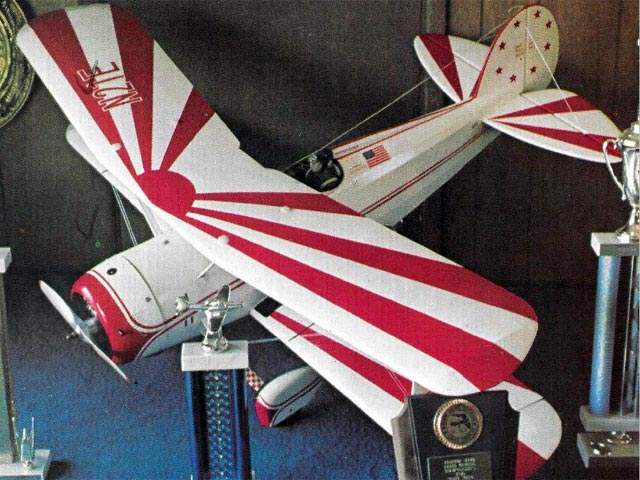