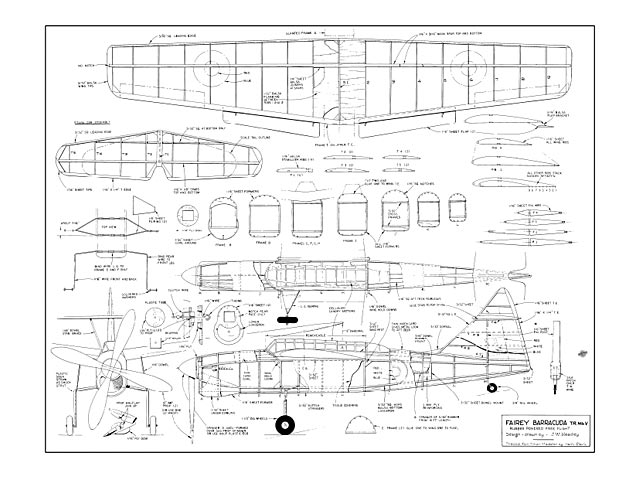 Quote: "The Fairey Barracuda was designed originally to replace the Albacore and Swordfish biplanes. Strangely enough, it was the first monoplane torpedo bomber to be used by the Royal Navy. The Swordfish and Albacore didn't seem to want to be replaced, however, so the Barracuda actually saw little wartime service as a torpedo bomber. Modified gradually during the war, the final version was the TR MKV, produced in 1945, which is the subject of our model. This version had the distinc-tive square wing tips and large dorsal fin.

Our rubber-powered version of this aircraft deviates from true scale in tailplane size (we added a little more area), dihedral and propellor. Although an ungainly looking aircraft on the ground, especially with its wings folded, in the air it looks quite good. We had originally planned a retracting undercarriage for the model, but it became a little too complex, and a little too gimmicky, so the idea was dropped. If you want more of a duration type model, just leave off the U/C altogether.

Construction of the model follows the usual rubber model lines, and should
present no problems for the experienced builder.

Wings and Tail: Being by making templates for the root and tip ribs and sufficient blanks for the intermediate ribs. Clamp these together and sand the blank ribs to the correct profiles. While still in the block, cut out the slots for the spars and the leading edge.

This operation is done twice, once for each set of ribs. The second block should be the opposite shape so that the bevels on the ribs are correctly aligned. After breaking open the blocks, lightly sand each rib individually to remove any sharp edges.

The wing spars can now be laid down together with the trailing edge. The complete wing is initially made in one piece, the spars are then cut at the centerline to give the correct dihedral. For this reason the center rib is not glued in place until after the dihedral braces have been added. So after all the ribs have been cemented down add the upper spar and leading edge, cut and add the dihedral braces, add the center ribs and the center section sheeting... " 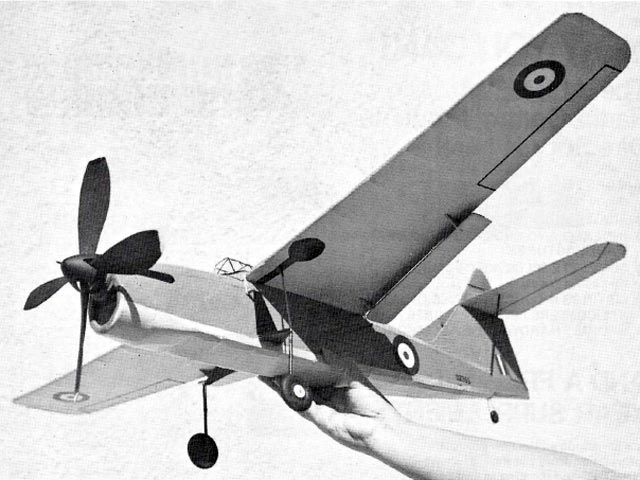