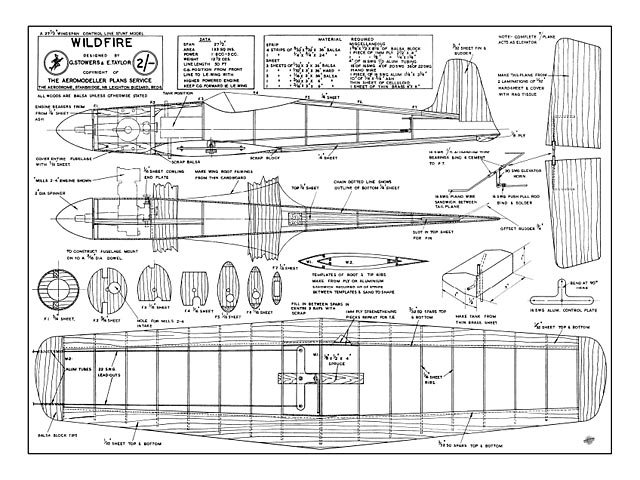 Quote: "THOUGH 'Wildfire' has considerably less wing area than I is fashionable for a 2.5 cc diesel powered stunt model, its speed and clean appearance make it a sporty model with a difference. Loops, bunts, inverted flight and figure eights are well within its capabilities. The motor used in the original was an ERE 2.5 cc. which can be seen in the accompanying photographs.

Flying weight was 12 oz with the ERE and speed 60 mph which is fast enough for really impressive stunting. An unusual wing section, similar to both the Isaacson symmetrical and Jim Walker's stunt Fireball (oz5746) airfoils, probably accounts for the high speed and a long but slow, flat glide. By the installation of a 1 oz fuel tank and small structural modifications, it is possible to make a fast team-racer out of 'Wildfire.' SMAE rules require an undercarriage which can be bolted to bulkhead F2. Make this from 3/16 plywood instead of balsa. Carve a dummy pilot's head to suit the cockpit, and enclose the engine cylinder with a balsa cowling. Another dummy cowl should be mounted on the opposite side of the fuselage to balance the appearance. Don't forget to allow access to the contra-piston lever.

The most unorthodox feature of this model is the tail unit which is a complete elevator without fixed surfaces. This provides extremely sensitive movement with maximum manoeuvrability. Balance point of the finished model should be on or in front of the 'down' elevator line.

Construction. First build the wings; make templates of the largest and smallest wing ribs, using either good plywood or 1/16 aluminium and sandwich 18 pieces of medium 1/16 sheet balsa between them. These can be decreased in size towards the tip to save wood. Chip down to rough size and then finish with sandpaper block. Make notches for spars..." 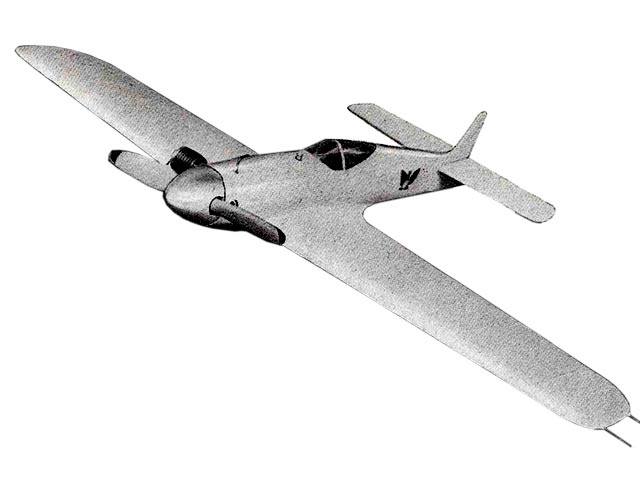