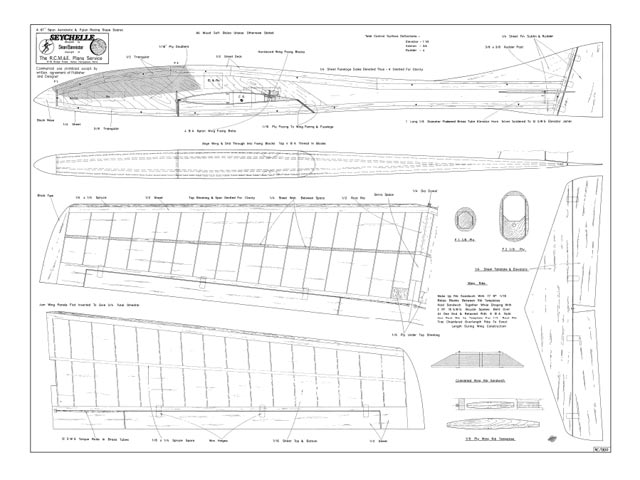 If you fly an intermediate slope soarer, you must have experienced envy watching a full-house soarer going through its paces. After suffering this situation myself over a period of three years, motivation finally produced Seychelle.

Unlike some modellers who claim they wake up screaming in the middle of the night and have to write it down quickly, my designs usually mature much more slowly and this design in particular had been fermenting for about three years before pencil and paper united. The circumstances of this event however, must be kept top secret, in case this publication should fall into the hands of my employer.

Having decided upon an aerobatic slope soarer, the size had to be worked out. Observation here revealed two schools, one with small soarers up to 60 in span, the other with large soarers of about 75 in span. The advantage of the smaller soarer is a fast and axial roll but against the disadvantage of a more critical performance in marginal lift conditions (it won't fly!) The larger soarer will fly in conditions which will ground the small soarer but will have a slower and less axial roll. Hence I chose a 67 in wing tapered to reduce its resistance to rolling, combined with over 600 sq in of area to give better marginal lift performance. A mid-wing layout would also aid the rolling performance but creates practical problems with the radio installlation. The wing could be let into the fuselage by about 1-1/2 in though and retain a straightforward radio installation. Top or bottom? Top is traditional, bottom looks better. Low wing was selected even considering the potential risk of airframe damage in bad landings. In reality, no problem has been experienced even though I have had my fair share of bad 'arrivals' . The swept wing planform aids smooth performance at speed and also helps reduce nose ballast as the centre of gravity is well back at the wing root.

Wing section is the next necessity, every model should have one! Fully symmetrical for aerobatics, thin for low drag, sharp for low drag. The experts reckon a semi-symmetrical section does not hinder the aerobatic perfor-mance but helps in marginal conditions and also enables the soarer to be used in pylon racing events more competitively so a 10%
semi-symmetrical root section was selected, progressing to near fully-symmetrical at the tip to minimise tip stalling tendencies.

The tailplane area is 20% of the wing area, large by modern standards but used because a rearward centre of gravity is incorporated to reduce drag and also give minimal elevator trim change in inverted flight. The low profile fin, subfin, and rudder look small but the rudder is very effective. On the prototype, rudder was set in about 1 in from the top of the fin but later experience has shown this feature as not worthwhile and has therefore not been included on the plan. With this layout, no rolling tendency is induced when applying rudder during a slow or hesitation roll, making the soarer easier to fly.

A long fuselage aids flight smoothness but with the wing section, centre of gravity, moment arm layout, very tight turns can be accomplished at speed. Two oz of lead was needed in the nose of the prototype to bring the centre of gravity to the position shown on the plan. For this reason the nose has been lengthened by 1/2 inch and the rudder hinge line moved forward to coincide with the elevator trailing edge.

No advantage was gained from sloping the second bulkhead at the wing leading edge and as an aid to construction this is now placed upright. All linkages except for rudder have been kept internal with torque rods to the aile-rons and a central, internal elevator horn. Wing bolts are two 4 BA. nylon bolts, again tidying up the soarer and reducing drag. A rounded fuselage with no corners neatly finishes off the profile.

All the balsa used is soft quality so make a nuisance of yourself at your local model shop selecting the softest and lightest sheets available. Please do not go to my local shop as he has already had enough and I want all his very light soft wood for my next model. Remember, also not to select wood with your thumbnail. If you don't want the sheet with your thumbnail mark on it, neither does the model shop proprietor nor his next customer.

Construction: As you are now reading the construction details you must have already passed over once and read the flying notes, so there are now no excuses for not giving this section your full concentration!

Wing: The 1/16 sheeting is prepared from four sheets of 1/16 x 5 x 36 in and two sheets of 1/16 x 4 x 36 in, cut diagonally from corner to corner. One panel of sheeting is stuck with the grain of the cut sheet running into its adjacent sheet. The joint is very easily and neatly made with the aid of masking or draughting tape which holds the two sheets together along their butt join. This butt joint is then opened up, hinging on the tape, and a small bead of balsa cement quickly run along its length and the sheets again closed up. The excess balsa cement which oozes out is left to dry for about 60 seconds and then cleanly sheared off with the sharp edge of a piece of scrap balsa. The four completed wing panel sheets are then left to dry, the masking tape removed and sheets sanded before fixing to the wing.

Seventeen 1/16 balsa blanks are placed between the two 1/8 ply wing rib templates and carved to shape. Final shaping is done with a flat sanding block. Before the ribs are removed from the sandwich, 1/8 deep slots for the spars are cut with a razor saw and most important, a centre line is drawn along the chamfered leading and trailing edges of the ribs from the centre lines marked on the ply templates..." 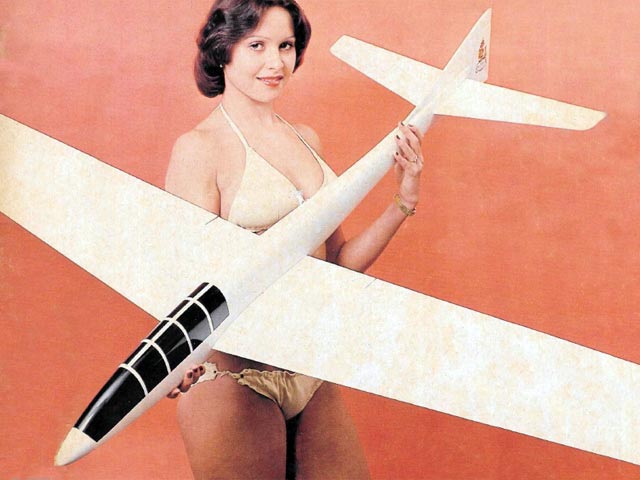