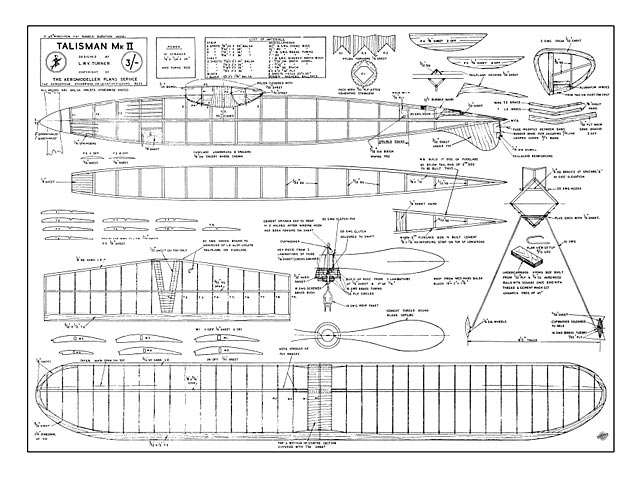 Quote: "THE Talisman originated from a 4 oz duration model 'Opus I' which was designed in the Spring of 1948. However, some brights bods in the club room found a new name, 'Hopeless One'. Featuring a diamond fuselage with a built-up cabin, twin fins and a folding prop, it used to clock a consistent 2-3/4 mins in still air. Not so hopeless after all! Stability in the glide under windy conditions was not so good. Opus II (yes, Hopeless, too !) had a longer moment arm and a slightly heavier wing loading. Stability was improved a little, but fell short of that required. Performance was still just under 3 mins. After losing this kite in a tall tree, work was started on Talisman Mark I.

At the time, interest was growing in the SMAE Merit Certificates. Therefore, in order to bring the model up to FAI weight, close attention was given to simple streamlining without adding too much weight. Diamond fuselage and twin fins were still retained. Twin fins, because the way I figured was that, if the central fin has to be supplemented by out-rigged anti-spin fins in high powered ships, then why not go the whole hog and use two fins. Also tailplane efficiency and effective aspect ratio are higher; at least, so say the theorists. The fixed wing position on top of the cabin in Opus I and II gave way to a smaller cross section streamlined pylon, which enabled fore and after adjustment for trimming. The decision to abandon the folding prop. and use a normal two-bladed free wheeler, was more than justified in that the glide was as stable in wind as in calm. With a spinner and nose stringers on the fuselage, the model began to look quite a clean job. On the Mark I, a single bamboo peg leg undercart sufficed for take-offs.

In spite of the foregoing, the weight was some 1/2 oz under FAI rules. As a shoe-horn would have been required to get any more rubber in the fuselage, plasticine was added in the nose and the wing moved right forward for balance, thus obtaining a beneficial increase in moment arm.

The work put in on development now showed signs of paying dividends. Test flights on low power returned 1 to 2 mins, and, when trimmed for peak performance, 3 to 3-1/2 min flights were the order of the day. The model was lost, 10 mins OOS one hot afternoon after foolishly putting on too long a D/T fuse. The kind soul who found it, wrapped it up in brown paper and forwarded it through the post. Needless to say, the postman pushed it under the door..." 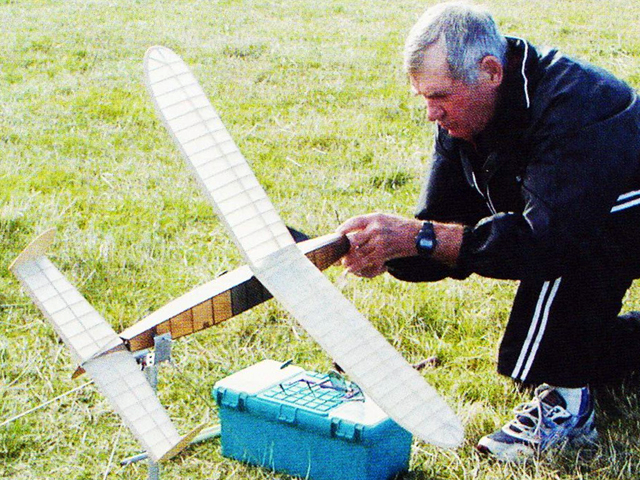 I wonder if "FAI rubber duration" means the same thing as Wakefield. Seems like it might. The wing is close to the right size, I think.
Lincoln - 01/05/2019
You have to compare the specific official rule for each category. But official rules changed during the times due to new technique and materials. Wakefield or other rubber powered categories weren't related only to wings or fuselage span. See the site on Wakefield History for comparison on rules changing https://www.fai.org/wakefield-international-cup-rules-summary Regards
Pit - 01/05/2019
Add a comment