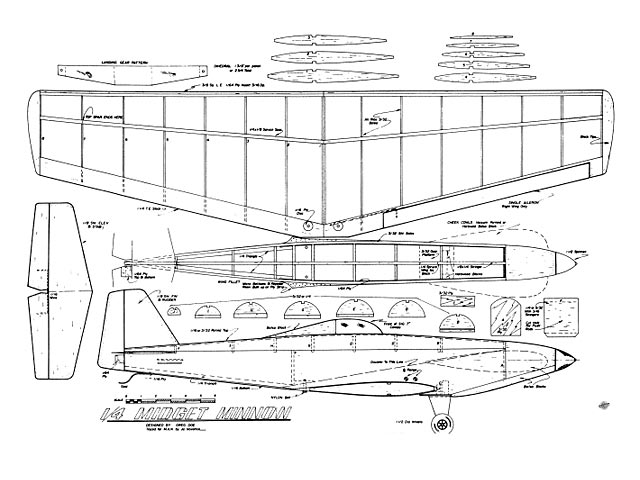 Certainly one of the most popular model racing designs is the Minnow. Actually, three nearly identical aircraft were built by LeVier and Associates in California around 1949: the Minnow, the Tony and the Ballerina, plus a fourth airplane of shoulder wing design, Miss Cosmic Wind. All four were of Cosmic Wind design, so to simplify things, this model will be called a Quarter Midget Minnow.

The accompanying pictures show the fifth Quarter Midget of this design. All flew very well with the exception of number four, which had poor performance in the air due to a warped wing. It did, however, perform well enough to win 1st place at the 1974 and 2nd place at the 1975 Lake Charles Nats in the hands of Tom Baker of Kings Mountain, North Carolina.

A dentist and father of five boys, Tom Baker, like many other modelers, is often too busy to do all the model building that he would like to do. This provided a situation beneficial to both of us; I built Tommy a Quarter Midget Minnow in exchange for a customizing job on a Formula One engine.

The 1974 Nats winning plane was powered by a Supertigre .15 and equipped with a Kraft radio using KPS 12 servos. Weight was 2 lb 8-1/2 oz. Tommy chose to replace the cheek cowls and canopy with more streamlined ones of his own design; performance seemed unchanged.

For the 1975 Nats the airplane sported a new red and white paint scheme, a Rossi .15 and glow heat. The glow heat consisted of a 550 MA nickel cadmium battery in the airplane and connected to the glow plug for each heat race. The primary purpose of the glow heat was to produce a more reliable idle. To my knowledge, only two 1975 Nats contestants used glow heat, Tom Baker and myself, and we finished 2nd and 5th. Flying weight of the Minnow was raised about 4 oz with the new paint scheme and the airborne glow heat battery.

Before beginning construction, study the plans and text carefully. Certain construction techniques employed may be too difficult for the inexperienced builder. If you have never built a Quarter Midget, select one of the many fine kits for your first attempt.

Before a description of the construction, a comment on adhesives. lf you have not used any of the Alpha cyanoacrylate glues, you must drop everything now and try them. They're the neatest thing since sliced bread. Two well-known brands are Hot Stuff and Aron Alpha. About 80% of the construction of this model was done with Alpha glue. This glue is not a void filler; parts must fit closely. Once you have experimented with this glue on several models, you will appreciate its many uses. (lf Alpha glue is not available locally, it may be ordered from FHS Supply, 645-D Pressley Rd, Charlotte, North Carolina, 28210. Ask for Aron Alpha and send $5.00 to cover cost, tax, postage, and handling.)

The wing is fully symmetrical so that it may be built right side up or upside down. Determination of which side is to be top or bottom may be reserved until the panels are joined with the dihedral. The dihedral is 1-3/8 in per panel or 2-3/4 in total.

Only one aileron is used. The aerodynamic reaction of adverse yaw dictates that if the airplane is turning left, the right aileron will help slightly to hold the nose up in the turn..." 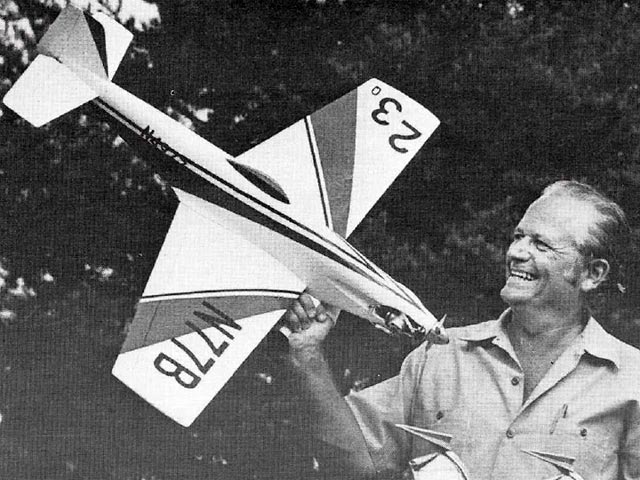