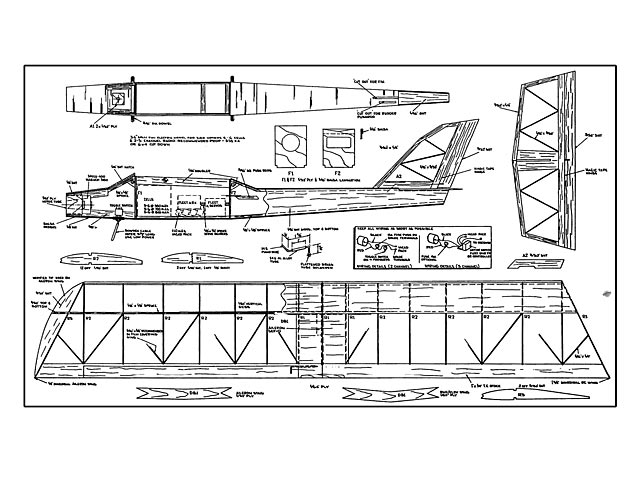 Quote: "In the search for a handy, small, electric model, John Digby designed this model for use from small sites for two or three function radio.

Want a small model for those smaller flying sites? Want a model that you can lose in the back of the car? Want to try electric without committing yourself to lots of expensive cells and motors? Well Wispa could be the model for you!

My original Wispa was built back in 87 and designed around the readily available and very cheap Mabuchi 380S motor since I wanted a model that would allow me some evening flying on a nearby small field. I have flown electric 'only' since 1985 so the form of propulsion was obvious, but what type of model should I build? A small glider was considered but I envisaged landing problems as, although the site was fairly open, it was surrounded by a low hedge. I finally decided upon a high wing cabin type model mainly for ease of flying and construction. The model was built as per rudder/elevator version detailed on the plan with the exception of the wing which was a tissue covered open structure, the plan shows a different version suitable for film covering. I have built two further wings as per plan and these have proved adequately strong.

Performance with 5 x 550mAh cells and a 5-1/2 x 4 prop was very good - not bad since the total cost of motor/cells/prop was less than £10. Wishing to keep things as simple and cheap as possible, I had not fitted any form of motor control. Knowing that there would be insufficient power to make use of a speed controller I had considered using a relay switch operated by the throttle channel but dismissed this as I wanted the option of fitting a 2 channel radio that had been sitting idle in the workshop for sometime.

One solution would have been to operate a microswitch on full deflection of the elevator servo. I had heard of this used on electric sailplanes but eventually considered it inappropriate for this type of model. The solution came via a letter from long time electric flyer George Bushell. At the time I was editing Electric Flight UK newsletter (now official newsletter of the British Electric Flight Association) and George had written in with details of a similarly powered electric sailplane. Of particular interest was the description of the motor switch used. This consisted of a simple small toggle switch protruding from the underside of the fuselage extended by a short length of plastic tube - an empty 'biro' refill in this case. Operation is simply a matter of push forward and launch. When insufficient power is available to maintain flight the model is landed and the tube knocks the switch to the off position. Suffice to say the tube must be long enough to prevent the prop hitting first and stalling the motor. George reported that he had used this method on previous models with no problems.

The fitting of a fuse is recommended - a 10A automobile type is sufficient - as soft landings in long grass do not always activate the switch. I found out the hard way!

During the past few years several other suitably sized motors have become available. A good replacement for the 380S is the 380SH now becoming well known as 'Speed 400' from Graupner. This motor is wound for use with 6-7 cells and is recognisable by its metal backplate. When used with 6 x 600mAh cells this combination is hard to beat for the money.

A short list of recommendations is listed on the plan. This includes the Kyosho AP29 which, in its cheapest form, is 3 times the price of a Speed 400 but which does give an increase in performance. The most powerful motor I have used is the Astro 020 as it is one of only a couple available for use with less that 6 cells..." 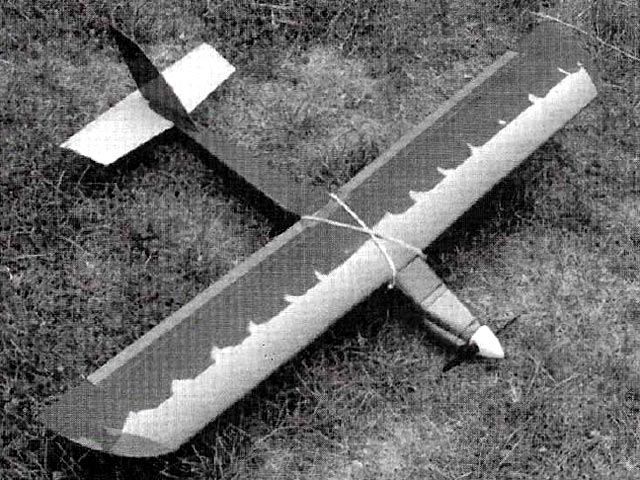