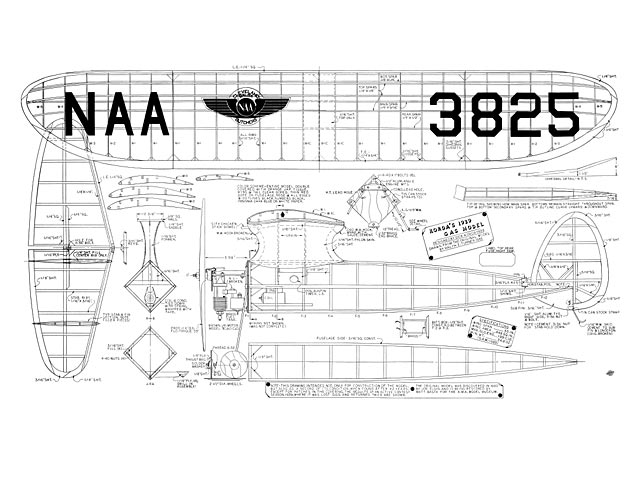 Quote: "Note this drawing intended not only for construction of the model, but also as a record of its condition when found after 42 years. Except for patches in the covering, the results of an active contest season 1939, where it was lost OOS and returned twice are shown. The original model was discovered in 1980 by Joe Elgin and is being restored by Matt Basta for the AMA Model Museum."

Quote (SAM Speaks, July-August 1983, Number 56, p1): "Joe Elgin, well known Cleveland modeler and designer of the famous Playboys, has submitted Dick Korda's prewar rendition of the Diamond Zipper for our consideration and approval. As the model has no official name, we will title it 'Korda's Diamond Zipper' and use that reference in all discussions hereafter. Per Elgin's letter, it was brought out that this model was built some time after Korda had come in contact with Goldberg's original prototype at a prewar Akron contest held in 1938 or 1939. The 1937 date indicated in Joe's letter would be an impossibility as it has already been documented that Goldberg first flew his ship at the 1938 Nationals held in Detroit. Korda's forgotten version had languished in an old friend's basement for many years until its existence was made known recently. According to available documentation, the ship has been approved for Old Timer status." 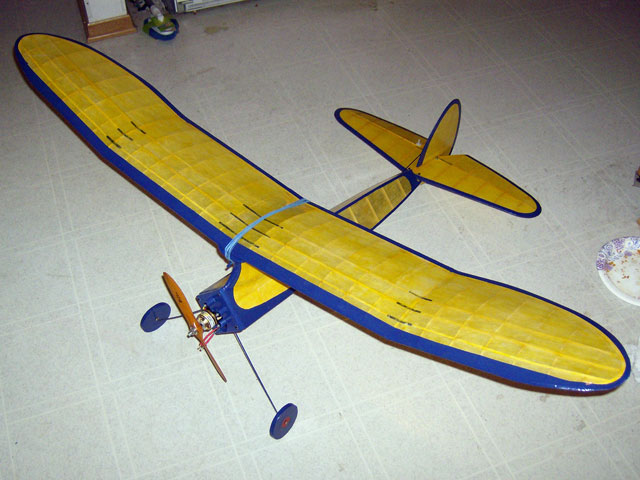 The Korda 1939 Diamond is a wonderful flyer - I have a photo of mine on electric RC but am not sure how to submit it. Best regards from Central Iowa, USA, Jeff
Jeff McCammant - 27/04/2019
Thanks Jeff. We don't have an image upload on the comments, but if you just email the photo to us at admin@outerzone.co.uk we'll add it onto this page.
SteveWMD - 28/04/2019
I'm glad the Korda 1939 Gas Model was added to Outerzone - it is a very historical model and a great flyer. Mine was built from the same plan. Mine was a Complete A Project on RC Groups. I attach a couple pictures [model photo & more pics 003-005]. The best two pics were taken by Eric B. at Marshalltown Iowa USA field 2017.
Jeff_McCammant_Iowa - 01/05/2019
Have changed the title on this one from 'Gas Model' to 'Diamond Zipper', thanks to AaronKV.
SteveWMD - 01/07/2021
I have managed to get Steve confused here. My apologies. My bad. "Diamond Zipper" is an alternate name for Carl Goldberg's "Gas Bird". That is seen in the SAM listing. For the Korda gas model (oz11108) on this page, SAM has it listed under two names: "Korda Diamond" and "Diamond". I think the most appropriate title for this Korda gas model (oz11108) is "Korda Diamond".
AaronKV - 01/07/2021
Easily done. Fair point, ok 'Korda Diamond' it is.
SteveWMD - 02/07/2021
Add a comment