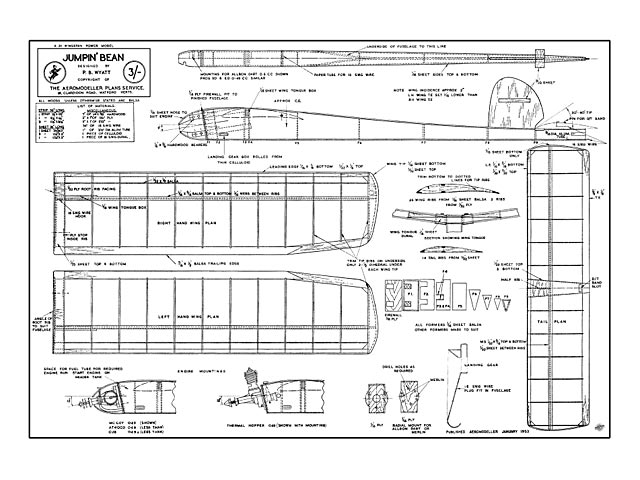 THE 'GET UP AND GO' characteristics of the Ipswich power model community is well-known, and this example from Peter Wyatt's stable should be just the model many readers have been waiting for. It's a point-fiver with the zip of an open power contest design, capable of giving the bigger boys a run for their money, and yet small enough to pack away in a suitcase.

This particular model layout was first developed in 1.5 cc form as an alternative to Pete's usual pylon jobs. The 0.5 cc version shown has been designed from a second 1.5 cc plane which proved very consistent and easy to trim. Main deviations from the first two models have been to substitute a single fin in place of twin fins and dihedral for polyhedral. This allows Jumpin' Bean to almost fit your hip pocket when dissembled and to take plenty of punishment in rough weather.

Fuselage. The construction of Jumpin' Bean is quite straightforward and does not depart from normal practice. First join up 1/16 sheet sides with formers F1 and F9 shown. Cement in engine bearers using 'Durofix' and the rest of the formers to suit the sides. Fix wing and undercarriage box in place, after binding them with thread, then the paper tube to take an 18 swg wing incidence peg, and sheet top and bottom of fuselage, except for the top of the tank bay. Durofix 1/16 ply bulkhead in place and sheet the nose to suit the engine used. Radial mounting bulkheads are given for a variety of suitable American and British engines.

Cover fuselage with lightweight tissue and give 3 coats of dope and one of fuel proofer; not for-getting the inside of the tank compartment, between F1 and F2. Find a length of fuel tubing which gives 15 second engine run, using a header tank for starting, and coil this tube into its compartment. At the rear a 3/16 diameter aluminium tube is fitted 'Ipswich' fashioned to take the forward, unburned section of the dethermaliser fuse. Add the sheet Fin, taking care to insert the cross-grained anti-warp piece.

Wings. Assemble the ribs on the bottom leading edge and lower part of 'I' spar, which is suitably lifted 1/16 in from the board, and using 1/16 sheet spacers to form the spar web. Fit the trailing edge at the appropriate angle of droop. Place the rest of the spars in position and build up the 1/16 sheet tongue box at the wing root, add the upper leading edge.

Assemble wings onto fuselage and cement root rib into position to suit dihedral angle. Firmly cement the retaining hooks in place, the ply stop for the 18 gauge peg and sheet cover the wing root panel. Cover wings with lightweight Modelspan and give 3 coats of dope. Note that each wing has slight washout into each tip, arranged by the system of shortening the ribs as detailed on the drawing. The wing tongue is from 1/16 in Dural, and is completely detachable from the fuselage and wings. Fill in the portion of wing boxes as shown... " 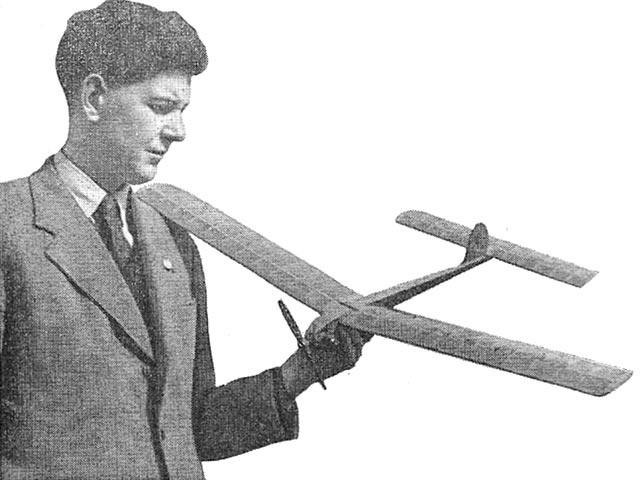