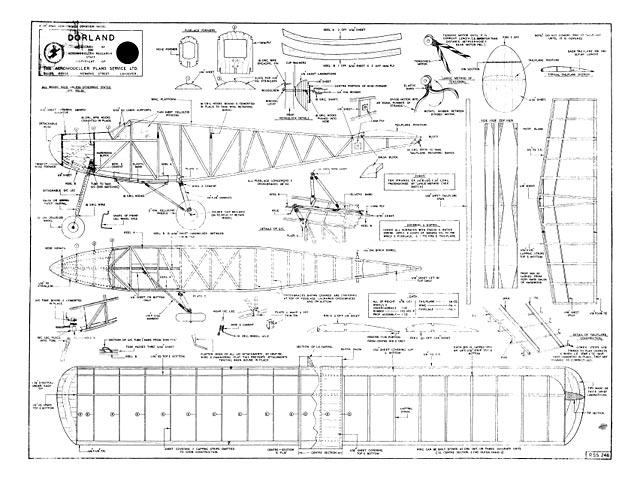 Quote: "THE whole strength of the AEROMODELLER Research Department was mobilised to produce the 'Dorland,' and, without undue self-praise, feel that their efforts have resulted in a model that combines the best features of the semi-scale and duration formulae. The specification demanded a design that, while within the capabilities of the veriest beginner, was yet sufficiently pleasing in lines to attract the expert, The general appearance is reminiscent of the latest trends in civil aircraft, with its tricycle undercarriage and twin fins, while normal slabside construction and flat lower surface to the wings ensure that the major portion can be built on the plan.

Performance will satisfy the most carping critic - its take-off run is short and exceptionally steady, the climb truly remarkable. In the air its twin fins lend excellent directional stability, keeping it headed into the lifting wind long after most models have turned. In the unfortunate event of a hard landing the sturdy construction and sprung nose wheel take care of even the nastiest prangs. But we have said enough, it is hoped, to rouse the urge to build and possess a 'Doriand'.

Fuselage: Lay a sheet of greaseproof paper over the drawing, pin top longeron in position, steam two bottom longerons together and pin one on plan. Add uprights and diagonal braces and also the sheeting for the rear motor peg. When first fuselage side is completed, carry straight on building the second side on top (see Fig. 1). When dry, lift from plan and separate two sides with a razor blade.

Whilst fuselage sides are drying, construct centre keel and prepare 1/32 sheet side strengtheners. Add strengtheners to sides after separation; note that they are cemented on the inside.

Cement two sides together at the rear of the fuselage and grip with a bulldog clip; insert cardboard templates and hold in position with rubber bands. Square up fuselage and check for alignment, then fit and cement nose formers in position, holding with pins and rubber bands. Attach the centre cross-pieces first, both at the top and bottom of the fuselage; follow with the remainder. Fit former No.2, cement, and then insert keel. Add formers 1 and 3. When dry fit nose stringers, undercarriage attachment plates, also the various attachment hooks and front undercarriage tube, binding keel fore and aft of this tube. The nose and the tailplane platform should then be sheeted in..."

Quote: "Convert the Dorland to Diesel Power. By Don Stothers.

One of the most popular plans in the Aeromodeller full-size plans service, the Dorland has already seen three birthdays as a most attractive rubber model. Now, Don Stother's conversion to diesel power (see photo, right) offers a new lease of life to make this design even more popular.

HAVING become acquainted with the pleasing semi-scale appearance and performance of the rubber-powered APS Dorland it was decided to construct a modified version incorporating an Amco .87 cc diesel engine. Any comparable power unit will give excellent results, the new .5 cc diesels should be suitable.

Construction. After the fuselage sides are completed as for the rubber model, two special formers B and D are cut out of 1/8 ply and 1/4 in balsa respectively. The front undercarriage leg support is sewn and glued into position on former B. Both formers are then cemented into the positions shown. Two engine bearers are cut from 3/8 x 1/4 in birch 4-3/4 in long, and well cemented into place in the formers. Nose block A is then roughly cut to shape..."