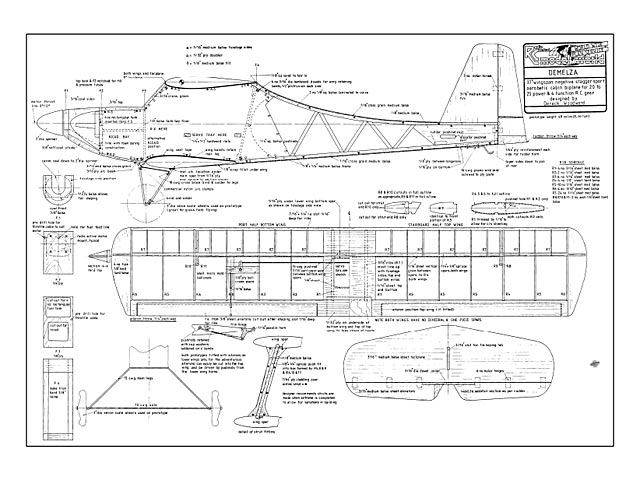 Quote: "Demelza Plan Feature. For .15 to .25 engines and four function radio, this distinctive sport biplane was designed by Dereck Woodward.

I've always had a soft spot for biplanes, so much so that in the two years I was tinkering about with Joanna (RM 269) she nearly grew a top wing several times.

My requirements for a quick build precluded lots of struttery, so some serious doodling set in. Somewhere in the process the wing stagger got itself reversed and the cabin fuselage sort of followed on. MK1 took a couple of months longer than usual due to moving house (Scotland to Cornwall) but was soon airborne quite happily, to my surprise.

Demelza MK 2, presented here acquired a stretched fuselage with the same wings and tail to steady up the pitch response. The lightweight MK 1 flew quite well on an OS15, Demelza 2 started with an HB25 which was a bit excessive. Now she does very well on a stock 0S20. The back stagger certainly makes her stand out from the herd, and if appearance isn't enough her performance will certainly shine.

Wooden Bits. About now the designer says something on the lines of 'Cut out a complete kit of parts' for reasons known to himself. If you feel guilty about not doing this, don't worry! I often don't finish the plan before the test flight, let alone make kits. So let's start with the flying bits.

The ribs can be cut from a single ply template. The short, flat wings are nearly identical with the ailerons cut from the lower after shaping. The brave may care to try all four, I meant to but chickened out - two is fast enough.

Spars are webbed up to the strut boxes for a little stiffening. The ply reinforcement for the u/c is probably easier to add after covering, especially if one is using film. Tail feathers are light and adequately strong, this model is not prone to tail heaviness

One fuselage problem with a cabin biplane is with two wing seats, one gets two big holes rather than the usual one. This leaves only the sides to hold the ends apart, so I lashed out on ply doublers, for once.

The tank goes in through F2 so plan ahead for plumbing and don't end up trying to fit fuel tubes 'in the dark'.

Struts are best built to suit the fully rigged model. The spruce centre is the main strength with balsa and light ply for shape. Note the short ends to locate into the strut boxes. These hold the struts, but will allow them to leave graciously in the event of an unusual arrival..."