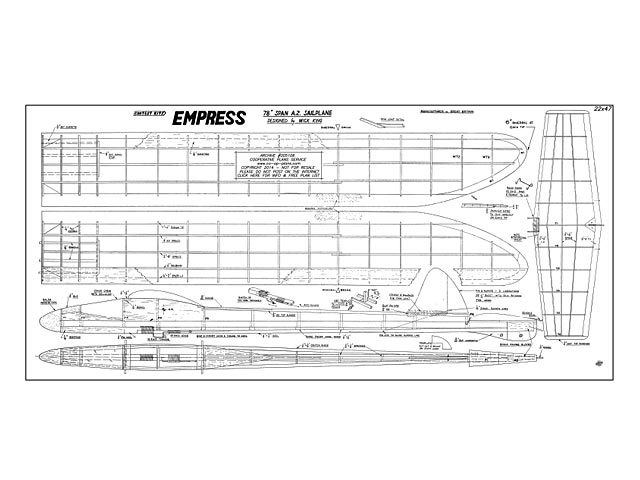 Empress. A2 sailplane model by Mick King, from Contest Kits.

This plan is stamped as Archive #005106 from the Cooperative Plans Service. See their website at www.co-op-plans.com

Quote: "Plan from the past: Empress A2 revisited. Contest Kits' 1957 classic A2 glider, re-created and presented for R/C slope-soaring by Marilyn Pressnell.

The Empress A2 followed in the footsteps of Inch Worm (oz3584) and several other highly successful products of Contest Kits, of Leigh-on-Sea, Essex, coming to the market towards the end of 1957. Selling at £1/9/6 (£1.48p in today's money) it was advertised as: A superb semi-scale A2 with grace in every line. It was certainly different and unlike other kit gliders or competition A2s at that time; its predecessor, the ubiquitous Inch Worm, seemed more in keeping with the trend. Indeed, when the prototype was flown the performance of Empress came as something of a surprise and a bonus to the company.

Semi-scale: As the product range grew, Mick King, founder and proprietor of Contest Kits, felt that a further A2 should be added because of the immense popularity of gliders in free-flight competition at that time. To attract new flyers a stylish semi-scale design was sought, and he designed the fuselage to be in scale proportion to the wing, rather than to slavishly follow the trend in ultra slender design. The long, glazed cockpit cover is a further scale feature and, of course, the high aspect-ratio wing with slender rounded tips, with the curvaceous fin, made an elegantly attractive model.

Mick King was an accomplished glider flyer and he represented Great Britain as a member of the 1952 team at the A2 Championships in Austria. His model on that occasion was known as the 'Ugly Duckling', a model of higher aspect-ratio than Inch Worm and very successful in the early A2 contests in this country. In layout, Empress with its 78 inch (198 cm) wingspan, closely resembled Ugly Duckling and could certainly emulate its performance.

First - and last -flights! The first test flights of Empress soon revealed its potential with a straight tow to 100 metres and a floating glide. Encouraged by this, it made its first contest outing to the Bill White Cup flown in cold weather in January 1958 at Epsom Downs. Mick King won that event comfortably and a seal was set on its pedigree in the Contest Kits stable. My last recollection of the model was as a free-flight slope soarer, flown on holiday from the towering Countisbury Hill above Lynmouth in Devon. It floated out in calm, warm air trimmed to fly straight. This it did until almost a speck on the horizon and then it gradually completed a full circle coming back above the launch point ten minutes later. The second circuit took it out over the sea until it vanished in the haze of the distant horizon.

That last flight must have lived on in the memory of Mick King, because I have recently learned that he continues to slope soar today with a radio-controlled Empress scaled up 1.1/2 times, with a Clarke Y type aerofoil. It has graced the skies in many countries, taking photographs over precipitous coastlines and romping over the sand dunes in Holland. In recent correspondence Mick has spoken about his early experiences:

As a youngster, I was always most impressed with the designs of RFL Gosling, a leading member of the Merseyside Club. His Ivory Gull (oz1588) was the best-selling plan in the Aeromodeller Plans Service and his other designs Baby Gull (oz2536), Senior Gull and Tern (oz7597) all had a classical look about them, as well as a semi-scale appearance and high performance.

When I went to Austria in the 1952 A2 team, Bob Gosling was the team manager, and we became firm friends. The Empress was designed to emulate Bob's models and has had a very loyal following. In the days of the 100 metre towline, Empress could clock up five minutes without thermal help. On the 50 metre line, but with ground effect, this would probably be 2.40 or 2.50 minutes. Very stable on tow and able to be turned in tight or open circles, she makes a good, elegant contest model.

Empress is also well suited to slope soaring. I have built a standard size with mini-servos and a large one with a camera, taking photos from a starboard position in the nose. This one is well travelled in Wales, the Canadian Rockies and Barbados - never go on holiday without a radio-controlled slope soarer! The sand dunes in Zeeland are brilliant and the nearest beaches offer a particular attraction with the spy in the sky..." 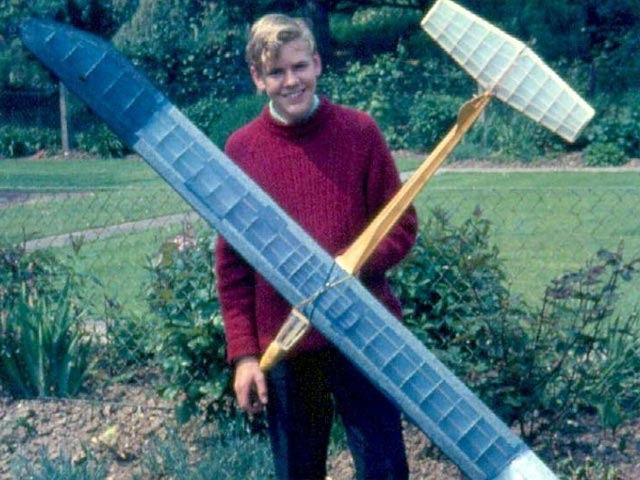