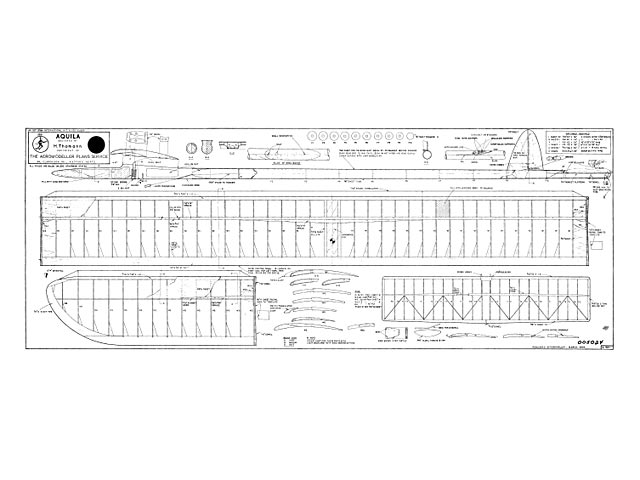 Quote: "Introduction to one of the most advanced A/2 designs in Europe. Assymetrical balanced wing system, devides by Hansheiri Thomann,

STUDENTS OF HIGHLY developed A/2 glider designs will be familiar with the outstanding performance put up by Hansheiri Thomann in the three World Glider Championships in which he has competed. Now engaged as a Diploma Engineer at the Aeronautical Research Institute in Sweden, Hans Thomann comes from Frauenfeld, Switzerland, and has long been an exponent of the high aspect ratio wing - slender fuselage model.

Aquila represents a culmination of his experiments, and it is worthwhile for those who have not studied earlier results to note that his individual performance in World A/2 Championships is probably higher than that of any other single person. The figures are as follows: [see table].

Because he was resident in Sweden in 1957 he did not compete last season, but instead he entered Swedish contests and won the first major event in which he entered!

In the article which follows, he tells us how he has been able to maintain the desirable thermal-holding tight circle with the unusual use of wing ballast in asymmetric trim, and whilst the design is certainly no beginners project, we recommend it to those who have patience, for it quite obviously represents many years of study and practical experiment.

Hans has provided a few notes to help builders, which will probably be of interest to others contemplating his type of design and construction. Ribs should be of hard balsa, weighing between 1-1/4 and 1-5/8 oz for a 36 x 4 inch sheet of 3/16. The sheet should then be covered on both sides with lightweight Modelspan before cutting the ribs. Wing tongues should be of soft aluminium so that they bend in the event of hitting an obstruction and can be straightened for required dihedral after every hard landing. A tongue will stand up to ten or more corrections before it becomes hopelessly soft and can then be easily replaced.

The only part of the fuselage likely to produce difficulties is, of course, the boom. One should select a uniformly straight grain sheet of soft balsa weighing up to 1 oz for 36 x 4 x 1/16 in, and this should be then sanded to 1 mm thickness at one end, using coarse paper. Cut it to a width approximately wider than the circumference of the core and sand one edge to a bevel to provide a good joint. Soak the sheet in hot water and bend it slowly around a core and allow to dry, clamped in position. When dry remove from the core and cover with thin Modelspan and trim the odd edge to make a clean joint throughout the length.

Formers can be pushed down into position afterwards or, by wrapping the sheet around them carefully during the course of construction. Use one of the stow-drying glues. To get the nylon auto-rudder line through the boom, attach a small lead ball to one end and shake until it falls through the holes in the formers.

Low component weight in the tail surfaces is very important and castor oil should be added to the dope to prevent warping. Most important component weights are: tailplane 7 grammes; boom, fin and rudder 23 grammes; wingtips 27 grammes each.

Now for Hansheiri's own explanation of his unusual trimming method; even if you cannot grasp the mathematical calculation, the idea behind the system will be obvious to all keen A/2 Glider exponents:

Luck always plays a big role in a contest where thermals are around. To get good times it is necessary to manoeuvre the model into a thermal bubble during the launch and to make sure that it stays there and the best way to hold a thermal is to have a tight turn trim. But if we trim our model for small turning radii there will be a tendency to side-slip in gusty weather and much height could well be lost as a result. How can we prevent this?

In Figure 1 the new flight condition is shown. In straight flight both wings are flying at the same point N. Because of the yawing the angle of attack of the inner wing will be increased..." 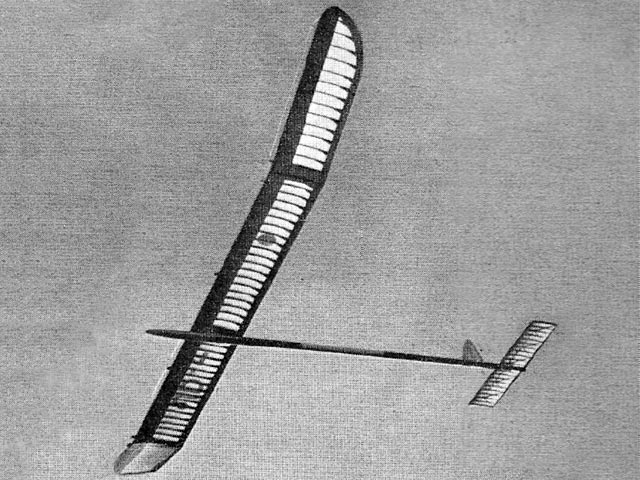