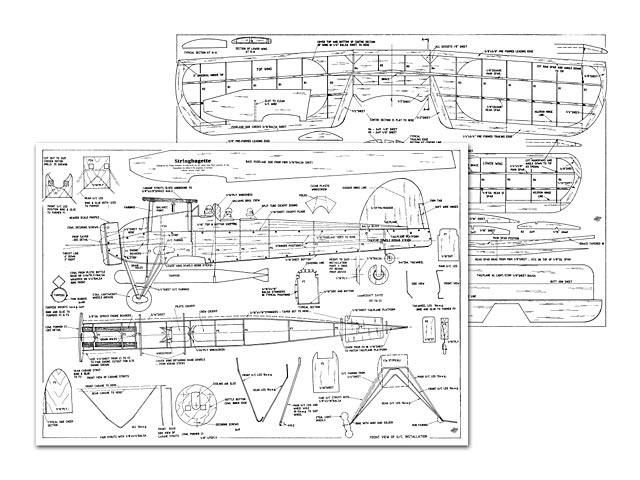 Quote: "This evocative design based on the Fairey Swordfish is guaranteed to go down well with any scale enthusiast. Stringbagette, by Peter Antram.

This free flight model is intended to give an impression of the Fairey Swordfish combined with the practicality of a sports biplane, hence the name; a sort of small stringbag!

Any model flown at our local meadow has to be tough as the trees keep leaping out to catch them, not to mention the shepherd's feeders and the farmer's trailers (I said not to mention the feeders or the trailers!). For the same reason, the wing and undercarriage strut arrangements are greatly simplified or left off altogether (what could be simpler or lighter?).

As there is a lot of wood used, choose light but tough timber and 'Bagette' will bounce well.

Construction: I like to start with a ldt of parts already cut out and bent up so that the plan can be secured and film protected without need to disturb it for carbon copies etc.

The tail feathers are a simple all-sheet job - important not to be too heavy though.

The wings are of similar construction but far from the same shape; for some reason Faireys seemed to give each component to a separate design group who were not on speaking terms with each other!

The large amounts of 1/16 sheeting make for strong wings and the thick sections of balsa at tips and centre-section allow for the carving of these complicated shapes. The flat vertical trailing edges at the centre section were to accommodate wing folding on the Swordfish and helps with the impression.

Choose light, tough timber carefully and cut out a kit of parts - it helps no end to be able to pick up a part as you need it instead of having to rush back to the plan and cut another bit before the last lot of glue dries!

I built each wing panel flat then joined them using the dihedral braces, completing the centre sections when set. The top wing joiner is cut from sheet and sanded to the taper shown, using clothes pegs to hold while the slow-set glue dries. The lower wing uses a flat joiner, note that the rear spar needs sanding to a taper to fit under the rear joiner.

I suggest the fuselage construction is started by drilling the 3/8 x 3/8 spruce engine bearers to suit your motor (the plan shows an Indian Mills 0.75) then fitting the bearers..." 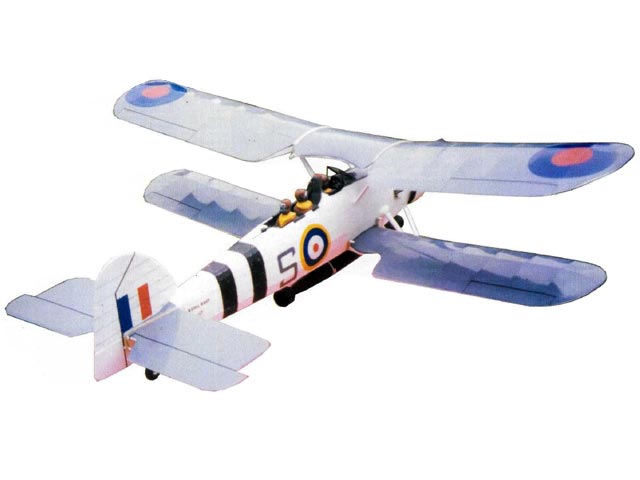