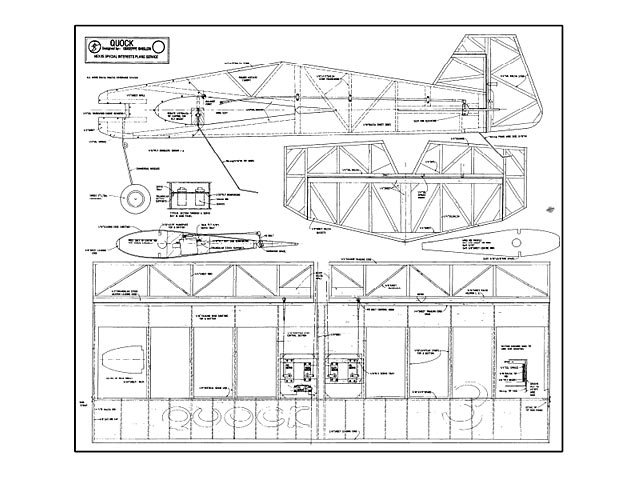 I first saw a Fun-Fly model some years ago when a fellow modeller brought to the flying field a Stunt Wagon built from a Florio Flyer kit. I was interested in its strange and unusual look, but wasn't really impressed. Some months later the same friend flew a new Fun-Fly model, the type now commonly seen, with a stick fuselage. While this. model had some impressive flying characteristics, I did not like the advice I received when handed the transmitter: Use full throttle only while climbing to avoid control surface flutter. I asked my friend for more information on this kind of model and received a bunch of American modelling-magazines.

Then I began to understand what a 'Fun-Fly' model really was and what it was built for. To be honest, I got no kick from them at all. I don't see any fun in flying a model whose only task is to make as many touch-and goes or loops-and-rolls in as low a time as possible. So my friend remained the only Fun Flyer in Cremona.

One day though, reading through the pages of Model Airplane News; 1
saw Santich's 'Fun Hots'. It was not exactly a Fun-Fly thoroughbred as it resembled a control line profile stunt model. I thought that a model like that would have different and fancier flying characteristics than its lighter cousins, so I designed and built my first 'Quock'.

By the way, this name does not mean anything in Italian. I had previously designed a model named Quick, so Quock seemed like a good choice. I accepted some weight penalties in order to have a sturdier airframe, which would be less prone to flutter. So I parted from 1/4 in thick ailerons and chose shaped ones. They are a little heavier and take longer to build, but built this way they are sturdy enough. Being a mechanical engineer my job is to design industrial metal structures, such as oil refinery tanks, pressure vessels, cereal stores, hangars and so on, so I chose a scientific approach to the project.

Wingspan was set to one metre as this is the length of balsa sheets usually found in modelling stores here on the continent. Later, having found 105 centimetre long sheets, the wingspan was increased to this length (builders in the UK may have to splice two sheet together to achieve the required length). These sheets are 10 cms wide (4 in), so the wing chord was chosen and the longeron positions set to allow the leading edge to be sheeted with one single piece without cutting. Trailing edge sheeting width was set at 5 cms (2 in) so one cut would give both top and bottom pieces.

All this helps to reduce building time to a minimum. Believe it or not, having previously prepared the rib cutting template, I built my first wing in just 2-1/2 hours one Saturday afternoon. The only things left to do were to shape the leading edge and install the servo mount. No jig is required, you only need a straight building board and one 1/2 in square balsa stick. The only glue used is thin and medium cyano. But more on construction later.

When building a model of this type, it is important to carefully select your balsa wood. A heavy sheet can weigh twice as much as a light one, so use medium to hard 1/4 in sticks to build the tailplane, medium to light sheets to build the wing and light balsa for fuselage.

Many Quocks have been built in Italy. From time to time I hear funny things, such as: I had to lenghten the nose by two inches to get a correct CG; or, Construction seemed weak, so I reinforced this and that, but this model does not really fly the way you promised! It only weighs 2 kgs. (That is almost 50% more than the design weight!)

To date I have built three models. The first one, with normal servos and radio gear, weighed 1.5 kg (some 3 lb), the next was 1.35 kg, and the last one, with an extended wing, was 1.4 kg and not one needed a fraction of an ounce of lead. So watch your feet, gentlemen!

I said that Quock is not as light as a real fun-fly, nonetheless it should be built as light as possible. Where you can easily gain weight is with the radio gear. I use one micro servo for throttle, two high torque minis for rudder and elevator, and two standard servos for ailerons. I also use a mini Rx and a 250 mAh battery. I have flown six 5-6 minutes flights in a session with no problems. With this set-up is it possible to spare as much as 150 grams, or a little more than 5 ounces. While not seeming an impres-sive gain at first glance, you should consider that this is more than 10% of the total model weight and I can assure you that the difference is readi-ly noticeable.

My model is powered by an SC32 engine,with muffler. This is a powerful, affordable and reliable engine, and it is very light. I use an 11 x 4 propeller cut down to 10-1/2 and 10% nitro fuel. To get 5-6 minute flights, I have installed a 75 cubic centimetre tank..."

Quote: "Hi Steve, Please find attached a CAD file for the above, but in version 2. I don't know what modifications Mr Ghisleri has made, but here it is if you want to include it for CAD obsessed people like me. Maybe the designer will wish to volunteer an updated file.
This plan had been uploaded at that terrific - for geeky people, I mean - site http://www.profili2.com/eng/plans.asp in 2004, and you'll find circa two dozens of Mr Ghisleri designs there among some 800 designs in total, many in DXF, the others in raster format. A pity they stopped loading new plans in 2007. Best Regards, Miguel" 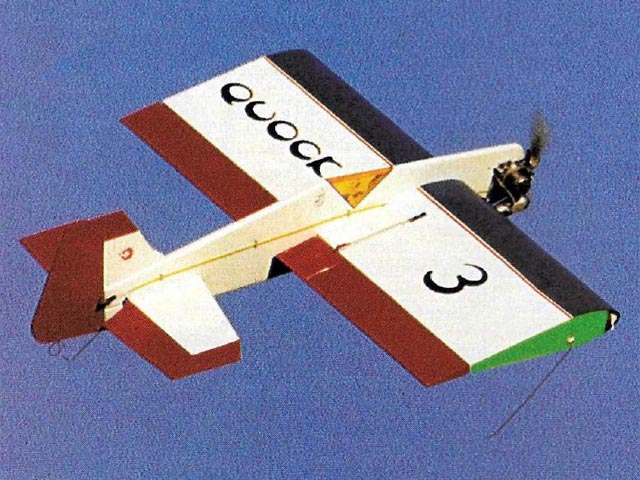 Shame on you English speaking people. Would you mind to spell correctly my first name once in a while? It should be written GIU... and not GUI... Besides, I'm very glad to see one model of mine in Outerzone which I look at every day.
Giuseppe Ghisleri - 07/04/2019
A thousand apologies, Giuseppe. Have fixed this listing now.
SteveWMD - 07/04/2019
Great Giuseppe! I know your work. Classic but innovative models.
Giampiero - 18/04/2019
How great to see this stylish compact profile model again, I built one back in the late 90's. Garnered much attention at the flying field. I might build another now seeing the plan (I gave away the original). Its a tough model too...someone was landing and yelled at me, their model flew under my legs as i jumped up to avoid contact , unfortunately I nudged my elevator stick forward in the process and it went in vertically from 10 foot high. It simply ejected the battery from the front wing sheeting - the only damage.
SteveP - 29/11/2020
Add a comment