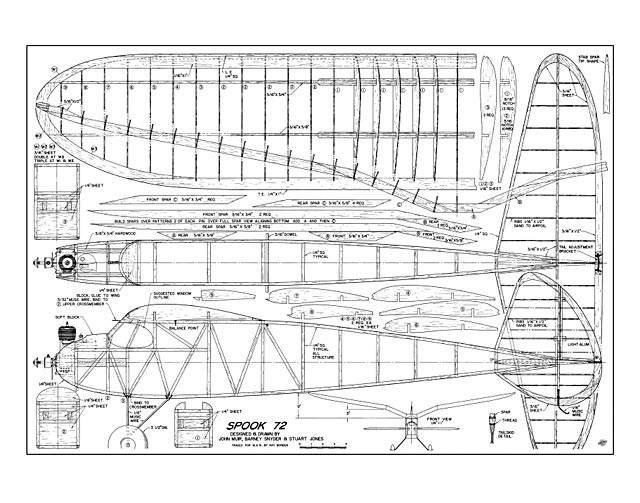 As far as we know, the Spook never appeared as a magazine construction article - at least not in Model Airplane News. We did, however, carry the advertisement that's reproduced above, beginning in mid-1940, so we assume the design dates back to that year.

The plans shown here were traced from original Modelcraft kit plans, and the building instructions that follow were taken verbatim from the same source.

The Spook should be a good choice for R/C Assist events, or just plain sport flying. Its 800 sq in area limits glow engine displacement to .35 according to SAM rules for competition, but for sport you could use anything you like.

We'd suggest beefing up the wing structure a bit by adding another spar above the main spar, then joining them with vertical shear webs. Extending the leading edge planking, top and bottom, back to the spar would then create a D-section leading edge tube with reasonable beam and torsional rigidity. A deeper built-up sheet balsa trailing edge with shear webs would help also. And, of course, silk and dope would add a lot more strength than you get from the average plastic films - and it'd be more authentic, too. As for the stabilizer, we strongly recommend carrying the leading edge through the fuselage, with a strong splice.

To make life easier for people who hate to cut ribs and formers, a 'partial' kit (less stripwood, planking, etc) consisting of ribs, formers, firewall, wing-tips, stab and rudder tips and pre-bent landing gear is available. The price is $16.00, plus $2.00 for surface delivery or $3.00 for air delivery, either Parcel Post or UPS. Order directly from: Schmidt Custom Kits, Dept. MAN, 11948 Franklin Blvd., Elk Grove, CA 95624. Do not order from Model Airplane News.

And now, on to the construction.

FUSELAGE: Build two sides as shown in the side view, then put together with crossmembers as shown in the top view. Put on landing gear by tying to the longerons with heavy thread or string. It is best not to tie the landing gear to the crossbraces. Wrap the ends of the land-ing gear with wire and solder. Build and install the battery tray and put in the motor mounts.

TAIL SURFACES: Cut out the ribs and outline pieces from printed sheet. Then build tail surfaces directly on the plan. When dry, sand to shape and ce-ment to the fuselage. Note: It is impor-tant that the stabilizer is mounted direct-ly on the centerline of the fuselage and that the rudder is straight. If the bottom portion of the rudder is not on straight, it will be impossible to adjust the ship.

1. Build two each identical front and rear spar halves.
2. Pin front spar halves on front view of wing and cement center section piece (piece 'A') in place. Build rear spar on top of front spar repeating the same procedure. Line up the top edge of the spars and make sure both front and rear spars have the same amount of dihedral on both sides.
3. When spar joints are dry, cement splices 'C' in place. You are now ready to put the wing ribs in place. After ribs are cemented in place, cement leading and trailing edge, tips and sheet wood on leading edge in place. Sand the tips so that the tops of these carry out the top curve of the wing ribs. Be very careful during construction to avoid wing warps.

At this point, engine should be installed and ship wired. If you're using an Ohlsson 60, build in about five degrees of downthrust..." 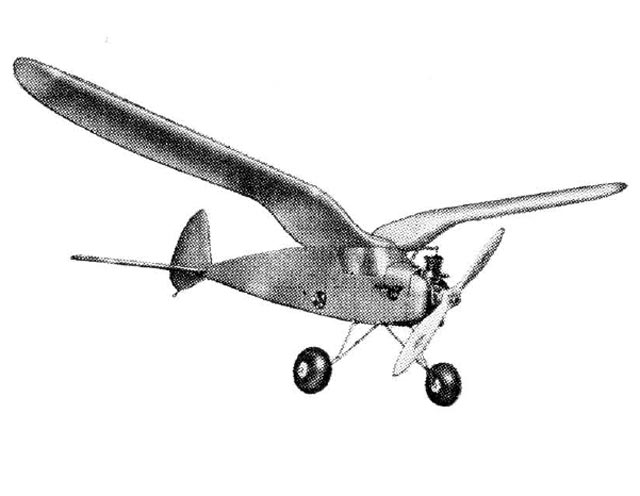