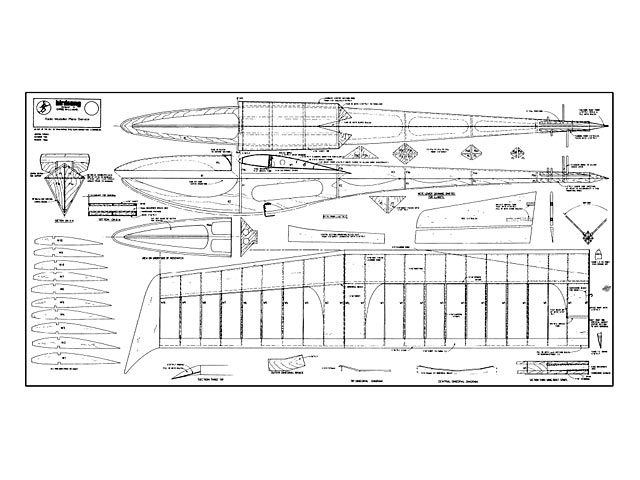 Why is it, I asked myself one night in a rare mood of introspection, that thermal soarers all look the same? Talking to yourself is, of course, one of the earliest signs of insanity. However, nothing daunted, I took myself to task: What do you mean, all the same? Well, you know - I thought for a minute. Thin, boxy fuselages, inelegant rear ends, it's all so - so, well, predictable.

Well, it's a bit like hatchbacks, innit. They feed identical requirements into their computers and receive similar results, therefore function ends up defining form. I sat back for a minute, impressed with the elegance of my reasoning. Be nice, though; wouldn't it? To design something different. Mmmmm, I s'pose so.

And thus was the Great Idea born. I'm not a great fan of the Vintage resurrection, (they take it all too seriously) but you have to admit some of those guys had a great eye for shape and form. What about, I asked myself, with rising interest, designing a vintage style model with a modern performance? In other words, the best of both worlds. We were off and running!

It was at this stage that fellow loony-bin inmate, Dangerous Hawkins, came up with a plan he had brought back from America for a thermal soarer called the 'Scooter', for which great claims had been made for its modified Selig airfoil. Following my own advice for designing models (take something of proved performance, prise out the important bits; section, decalage, moment arm, etc and change everything else to taste, cook for about four weeks on regulo 6... presto, another model is born! by a strange coincidence the proportions of the 'Birdsong' were almost identical to those of the 'Algebra 2.5M', and I don't even have a computer!

The first step then was to make up a couple of small-scale solid mock-ups out of scrap balsa and the like. These were then suspended by a thread from the ceiling so they could be studied from all angles; a very useful practice that I shall use again. The first decision when making the mock-ups concerned the shape of the fuselage. How to achieve a nice fat shape without an unnacceptable amount of drag. The answer lay in the triangular, or 'Toblerone' fuselage; a nice deep, curved shape when viewed from the top or side, but with very little cross-sectional area when viewed from the front, two conflicting requirements met in a nice compromise! The only complication lay in the necessity of constructing a centre-section pylon which was a wee bit complicated to fair-in, but all-in-all, it worked out very well.

Constructionally, a V tail has a lot going for it, especially if made detachable; only two blades, therefore less drag, and no rudder snag in the grass. It was at this point that I received the latest copy of the 'Soarer', the BARCS magazine, wherein I found a very interesting article on the subject of crescent wing planforms and the increased aerodynamic efficiency to be found in the employment of same. Hence the swept-back centre section panels, the leading edge sweepback of the tip panels and the curious looking tips themselves. How convenient to be able to use something different in the way of wing planforms and dress it up as the advancement of aerodynamic knowledge!

Some changes are shown on the plan from the prototype: The decalage has been increased very slightly, also the tail area. 1/32 ply keels are specified instead of the 1/16 on the original which turned out to be rather over-engineered. The 14mm steel wing joiners are far stronger than necessary but were all that was available at the time of construction. (Instead of 10g piano wire for the other joiners, 10g aluminium welding rod was used - not easy to find, but extremely useful).

Fuselage. Line 1/32in ply keels K1-K4 with 1/8 soft balsa (to increase the glueing area). Glue top keel K3 in place with formers F1a-F5a after drilling holes for control cables. Fit lower keel K2 in place and repeat the procedure with formers 1-5. Fit cables, ensuring that they are secured for their entire length. Glue top I/8in sheeting in place as far back as the rear of the wing pylon. Fit crossgrain and don't forget to organise the cable exits. Fit lower sheeting likewise, after glueing in the tow hook..." 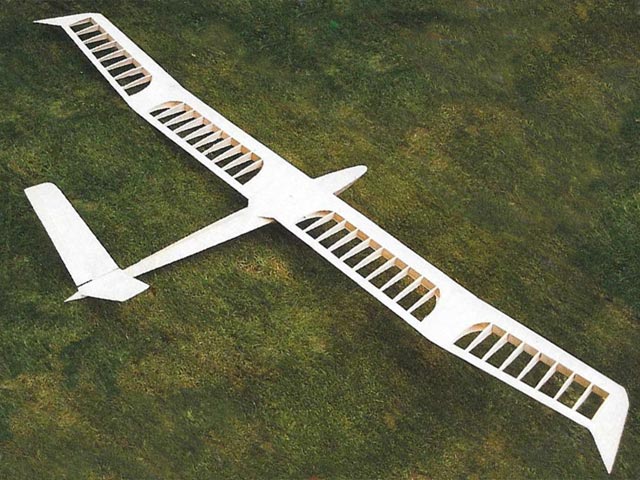