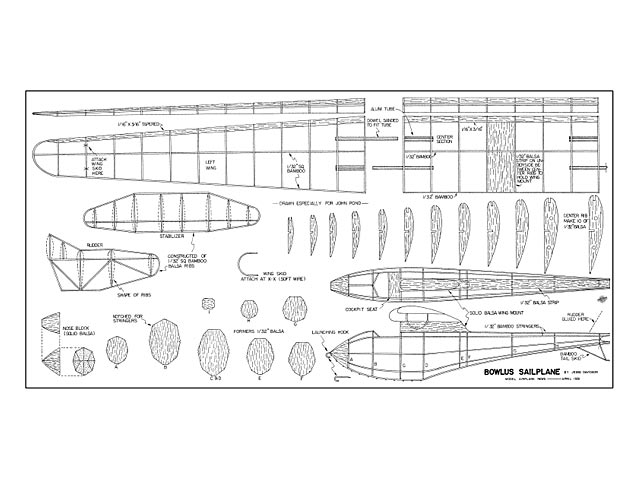 Quote: "A great soarer, scaled down from the original. How To Build the Bowlus Sailplane, by Jesse Davidson.

THE famous Bowlus sailplane, which was designed and built by W Hawley Bowlus of San Diego, California, (designer also of the well-known 'Spirit of St Louis') can be classed as one of the world's most successful sailplanes.

Two important records have been established in Bowlus craft: one being the American duration record made by Mr Bowlus, himself of 9 hours, 5 minutes and 32.2/5 seconds, and the world's record formerly held by Lieut Dinort of Germany, which was surpassed by Jack Barstow, who remained in the air for 15 hours, 12 minutes - 27 minutes longer than the previous record.

The scale drawing plans given here are exactly reproduced from the manufacturers' plans of the glider. A model made by the author was launched from all sorts of localities and found to inherit the same excellent gliding and soaring qualities of the big ship. It is well to point out at this time that the success of this model will be due to its strength, rigidness and lightness.

FUSELAGE. The fuselage requires care and patience in its construction. The bulkheads A to H are cut from 1/32 thick balsa wood. Cut out small notches to accommodate bamboo stringers, which are the longerons for the fuselage. Ambroid cement is used for gluing. After completing the fuselage, make the wing mount, as shown in drawing, from the piece of balsa, 1/2 x 3/4 x 2-1/2 in and the nose piece from balsa 1-1/2 in square.

The nose piece is glued and held firmly to bulkhead. Then the tail skid is affixed and glued as shown in plane. The nose hook is made heavy piece of wire No.9 and glued in position.

TAIL SURFACES The tail surfaces of the Bowl us sailplane are so distinctive that there is no difficulty in distinguishing them from any other type of sailplane. These surfaces are made of bamboo and balsa. For the spar in the rudder, use one strip of 1/32 bamboo. Balsa 1/32 thick is used for the ribs. These are streamlined, as illustrated in drawing. Bamboo spliced to 1/32 is used to outline both rudder and elevator. The elevator ribs are also made of balsa 1/32 thick. Now lay these aside.

WINGS The long, narrow wings of a sailplane give it exceptional stability. The ribs of the wings are different sizes and are cut from 1/32 balsa. A slot is cut out in each rib to fit the leading edge spar of 1/16 x 3/8 hard balsa. The center spar is made of 1/32 sq bamboo and is glued into notches below each rib.

Be sure that the ribs are in perfect alignment. After cementing ribs in position, use 1/32 split bamboo for the trailing edge and for rounding out the wing tips. A right and a left wing are needed and make sure that both are of the same weight.

Next fit in the 1/8 dia dowels and 1/8 dia aluminum tubing for attaching and detaching purposes. Note that these are set opposite each other (see drawing). Sand down the dowels slightly to fit the aluminum tubing..."

Scan from KaoruKiyose, cleanup by Circlip. 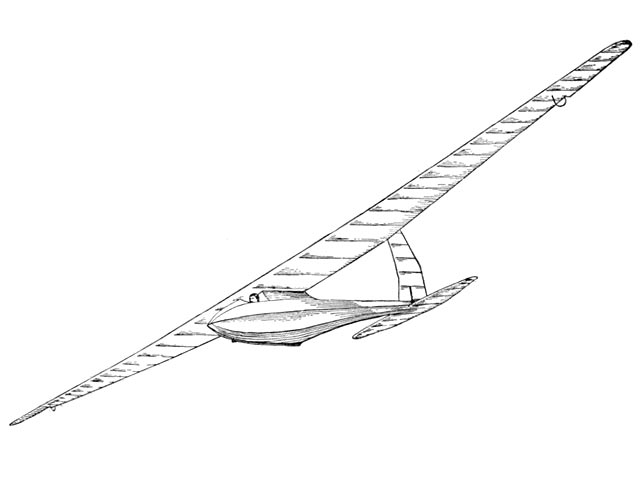