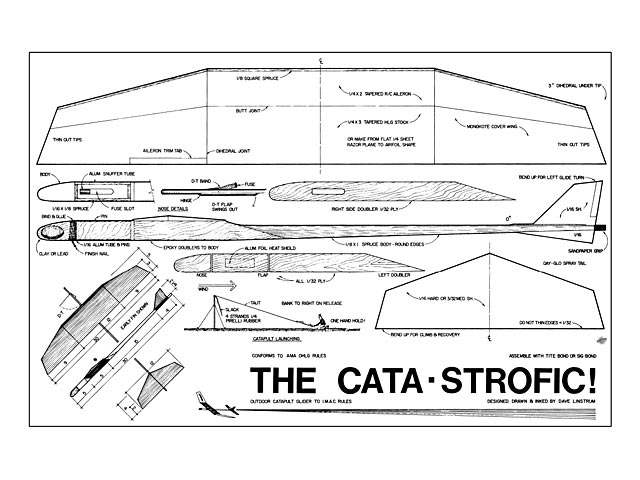 Quote: "Tired of throwing your shoulder out when attempting to put your favorite OHLG (Outdoor Hand Launch Glider) into orbit? Then catapult it to any height you want and then chase, as it's a sucker for any thermal! Cata-Strofic, by Dave Linstrum.

The Illinois Model Aero Club has long been known as a group of innovators, way back to the pre-war days when they came up with unusual solutions to the problems of maximum performance from rubber models and hand-launch gliders. In the last decade, this same group of flyers, becoming more feeble in their old age, have decided that the two events can be combined - that is, hand-launch gliders can be rubber powered!

How, you inquire? Simple - just take that old Wakefield motor that still has some stretch in it, but won't wind up enough torque for a max, and use it to catapult your handlaunch high into the sky! Catapult gliders have been around for a long time, as Meuser's classic treatise on the subject notes. The Oakland Cloud Dusters have long held catapult contests, but no other club has held so many or inspired other clubs and CD's to try the event than the IMAC.

The design presented here was created expressly for the IMAC meet held in the Spring of 1971, when we first had the opportunity to try the event. We gave up normal OHLG long ago due to our flabby physique and rubber arm, but trying catapult gliders put new interest into hand-launch type flying. It was sort of a shot in the arm, if you'll forgive the expression!

Note that this design meets the area requirements for AMA OHLG, so if you have a super arm and want a real floater, you could try it as a normal hand-launch. We would suggest adding a finger grip under the wing TE if you try this approach. You can always fly it as a catapult ship when you have thrown your arm out!

The appeal of this event, especially for those of us who are too weak or uncoordinated to be competitive at OHLG, is exemplified by a letter I got recently from Wakefield expert and prop freak Christian Schwartzbach of Copenhagen, Denmark. He had seen the 3-view of this ship that appeared in VTO and he wanted to know more about the type of model flown in the IMAC event. I told him that almost any type OHLG with a catapult hook would do, but the greater size and area of models like this and Charlie Sotich's fine design (a regular winner in the Chicago area) seemed to give them a bit of an edge. The smaller models, say the normal 18 to 22 in span jobs, get a lot higher but they go OOS quicker and don't have as high a still air time. Perhaps scale effect has something to do with it.

At any rate, I sent Christian some 3-views and Meuser's article to update him on the state of the art in the USA (apparently no other countries have caught on to the idea) and helped him with his proposal to make it an official event in Denmark! Note that it is not an Official AMA event - but perhaps it should be. It is ideal for small fields, and all flyers are on an equal footing since they fly on the same catapult.

A word about the launching device is in order. Unlike some articles you may have seen in other mags, this one deals with true catapulting - not simply high start with a docile launch. From four to six strands of 1/4 in Pirelli or similar rubber (use Sig, FAI Supply or equivalent, but not that awful Filati) are fastened to a nail in the top of a broomstick or tent pole. Work out a sling that prevents tangled strands. The pole is imbedded in the ground and guyed to stakes at 120 degrees, with one guy in the direction of the prevailing wind (pointing upwind). The rubber may be lightly lubed. Simply attach it to the sturdy hook on your glider, grip the ship behind the fin on the sandpaper grip..." 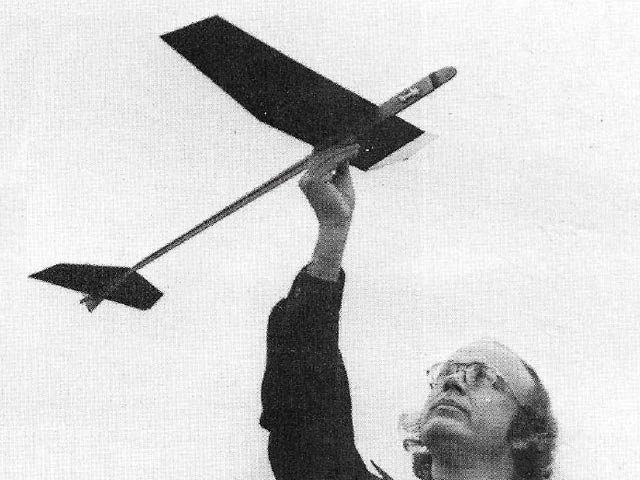