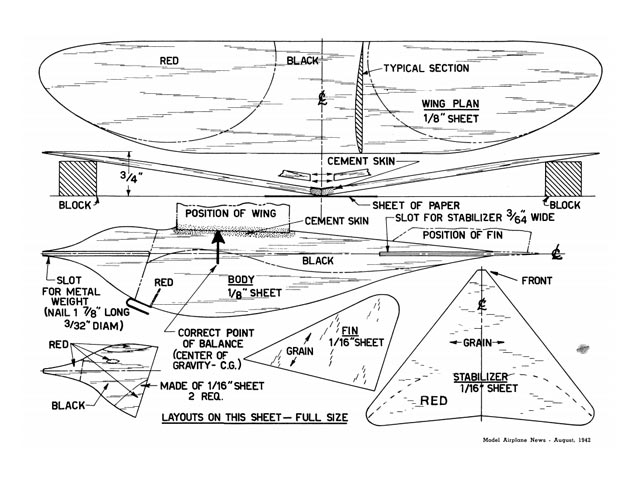 Experimenting with model planes gives an understanding of principles of designing, building and flying full scale airplanes that cannot be attained by merely reading books. Models demonstrate principles like lift and stability, books only tell about them, leaving their application still to be demonstrated through models or man-carrying planes in actual flight.

So like aviation's pioneers and many successful present day aeronautical men, you can start to build your aviation career now by experimenting with model planes.

The first models conceived by early experimenters were patterned from birds which will serve also as an excellent pattern for your first experimental plane.

Elementary consideration shows that a bird has all essential parts or characteristics required for flight:

1. Wings for lift and support.
2. Flexible wing tips that bend to propel the bird forward when it flaps its wings, or ability to glide with wings motionless when gravity pulls it forward and slowly downward.
3. A tail and movable wing tips to give balance and keep it steady in flight.
4. A body to join together all essential flight parts.
5. Legs for taking off and landing.

If your bird model embodies all of these in one form or another it will be capable of flight.

First consider the wings: Can they he made like a bird's? Not exactly, for a bird's wing is flexible and moved in flight to retain balance as well as generate propelling force. The model's wings must be made rigid, giving lift and support but generating no driving force. Birds do not flap their wings when gliding or soaring but hold them motionless except for slight flexture of the tips for balance. So the model must assume the characteristics of a soaring bird, gravity providing the propelling force. Lillienthal flew in this type of large plane before motors were invented.

It is it simple matter to equip the model with a tail like a bird, commonly a small horizontal surface rearward of the wings (called a stabilizer). When held rigidly this part keeps the bird or model fromn nosing down or up from its true flight course. To prevent undesirable turning to one side or the other, the bird flexes its wing tips, creating drag on one tip as required to keep flying straight, a feature used in turning also.

Obviously such control cannot be accomplished through the rigid wings of our model, so other means must he substituted. Airplanes employ vertical tail surfaces to prevent turning sideways (directionally) from normal flight course. So in addition to the horizontal tail surface, the model glider must have a rigid vertical surface, called a fin, as shown on the bird glider pictured on this page. Stabilizer and fin act like feathers at time end of an arrow, steadying the flight.

So a body is required for the model bird glider: In airplanes called a fuselage. Shaped like a bird's body it is very realistic and provides the means to hold wings and tailplanes in correct positions. Obviously neither legs nor other landing gear are necessary for a glider which is either thrown from the hand or catapulted by a rubber band, illustrated in Fig 8..." 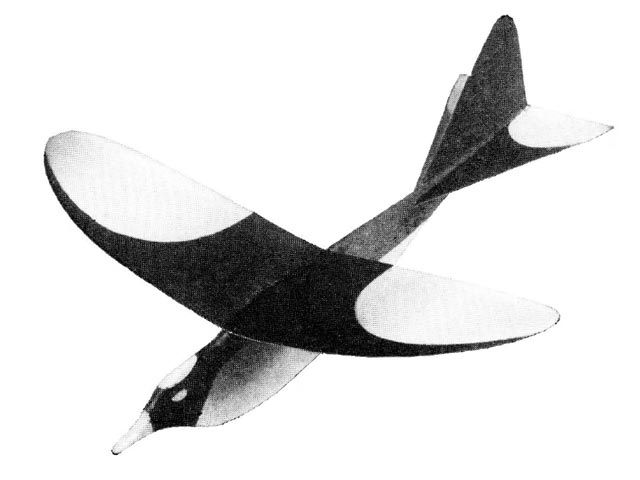