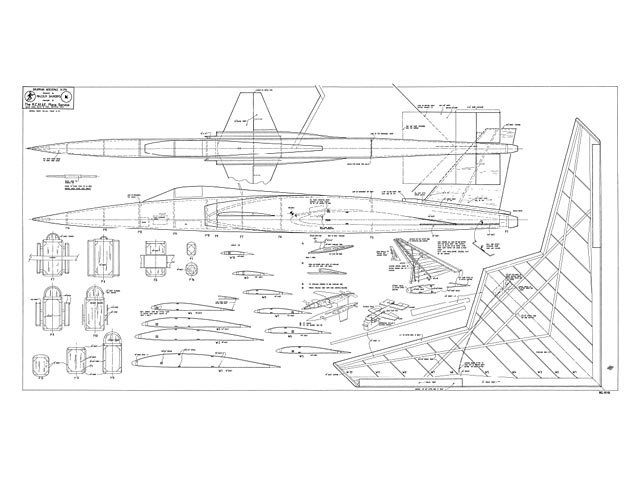 THE GRUMMAN X-29A must be one of the most interesting aeroplanes flying today. First flown in December 1984, it is quite unlike any other aircraft flying, if only for having its main wing swept forward 30 degrees.

The need for swept wings first appeared with the advent of jet engine technology, engines began to deliver more power than conventional airframes could accommodate, a major problem was the onset of compressibility with increased speed.

Sweeping the wings back reduce effective thickness-to-chord ratio and delays the compressibility effects and critical drag rise at high mach numbers (something that is unlikely to trouble model aircraft until they fly at over 500mph). On the other hand, swept back wings do have undesirable low speed characteristics such as being prone to tip stalling, which effects full size and model aeroplane alike.

In 1943 the German Junkers Company proposed sweeping the wings forward on their new high speed bomber the Ju 287-V1. In theory a swept forward wing has the same effect as a swept back wing in reducing the thickness-to-chord ratio, while at the same time offering significant advantages by way of higher lift over drag in manoeuvring flight, lower stall speed, improved low speed performance at high wing loadings and is not prone to tip stalling as is the swept back wing.

The JU287-V1 made some 17 test flights and proved the aerodynamic advantages of the wing form. Indeed final assembly of the definitive bomber, the Ju 287-V2 was under way when the factory was seized by advancing Russian troops in World War Two, but that's another story.

Aeroelastic divergence is a major problem with swept forward wings. As a swept forward wing flexes in flight the wingtips tend to turn up increasing the angle of attack of the wingtips relative to the airflow, this in turn places a larger twisting load on the wing, which if the wing is not strong enough to withstand will eventually twist the wings off the plane.

To compensate for this divergence forward-swept wings have to be very strong in torsion to prevent any twisting that could lead to catastrophic loads. In practice full size aeroplane designers have got around the problem by sweeping wings backwards and using washout, wing fences and fancy flappery to compensate for the inferior performance of the swept back wing.

What Grumman have done with the X-29A is come up with a method of building a swept forward wing using carbon-fibres that is both strong and light. From my own and other modellers' experiments in the States, a veneered foam or all sheeted wing is rigid enough for a model aeroplane up to 60 in wing-span and 9 lb weight.

A second interesting thing about the X-29A is that it is the most unstable aircraft flying today, with a CG located 35% aft of the aerodynamic centre. It is totally dependant on three on-board flight computers to keep it flying.

Moving the CG back to the same position as the aerodynamic centre will cause the plane to be neutrally stable in pitch and twitchy to fly. Moving the CG behind the aerodynamic centre, as in the X-29A, results in the aircraft wanting to climb, dive or do anything buy fly straight and level. Such a plane will flip on a sixpence, and is impossible for a pilot to control manually.

In building a model X-29A this presented us with our first real problem, as we must move the CG forward, preferably slightly in front of the aerodynamic centre to make radio control flying of a model X-29A possible..." 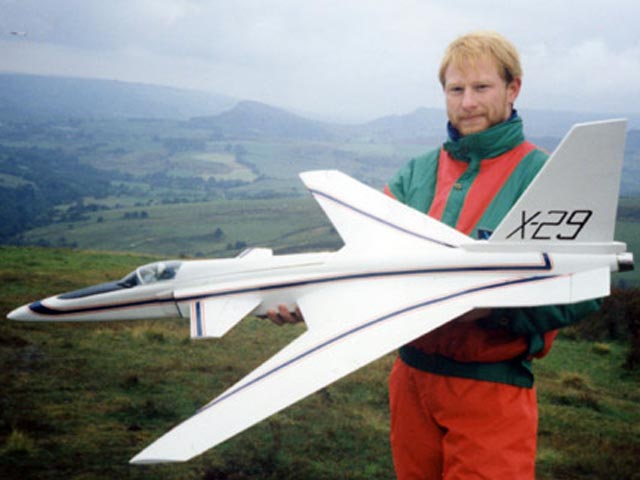